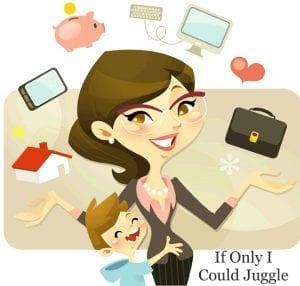 When I went through recruiting with the Big Four, I remember one of the CPA firm managers describing his day to me. He said every day I wake up and grab four balls from the side of my bed. One is for my family, one is for my clients, one is for my community, and one is for my friends. He said that his goal each day was to juggle these balls and to make sure than none was in the air long enough to cause the others to fall. He said he had been performing this act every day for seven years, and there was rarely a day when he got it right. I asked him what he considered a successful day if on most he dropped the ball, and he told me it was one where the only ball left in his hands was the one for his family. I have never forgotten his story.

Three weeks ago, I started back at work just in time for the madness that is tax season. Prior to having children, I thrived on the comraderie of the long hours and the challenge of the stressful projects. It was thrilling to have a fourteen hour day end in the completion of something really complex. Two children later, and I am overwhelmed at the thought of a fourteen hour day where I don’t see them in the morning or in the evening.

I try to remember that I just have to keep juggling.

I hear that crazy circus music playing in my head. Duuuuu-dun-dun-dunna-dunna-dun-dun-dunna-dunna. Picture me on stage juggling a foursome of glass balls. Everything is starting off well, the crowd gets excited and begins clapping along, and just when you think there’s going to be an awe inspiring finish, my trick concludes with a high flying collision of all four balls, and as they come crashing to the groun, I am booed off stage…

Ok, that’s being dramatic. Most days, I feel like I have it pretty much together (forget that I often smell like baby puke; I keep a sample of Tory Burch’s latest fragrance at my desk to mask this odor). It’s just that I cannot for the life of me keep all of those balls in the air on any given day. When I asked my friends what their biggest parenting struggle is, almost all of them expressed that it is striking the perfect balance between work and life. How do you find a way to be at soccer practice, pick up from ballet, make dinner, and not leave the office early? It’s a juggling act that seems like it can only be performed in the controlled setting of a circus, right?

I wish I had the answer.

Selfishly, because if I did, I would write a book and send it to Oprah, and she would list it as one of her favorite things. Then I’d be a billionaire who wouldn’t have to worry about being a circus performer. But also, because it seems that finding this balance is the key to happiness for most people I know, including myself.

What I do know is this :: from now until April 15th, I will have no balance. My priority is work. It has to be. So if I’m lacking in other areas, I will have to be forgiven. If I can’t bring a homemade healthy snack or I forget that it is your birthday or I miss a committee meeting, it’s not that I don’t think these things are important. It’s more likely that, while juggling, all of those balls collided. Hopefully, the only one I have left in my hand is the one for my family.

How do you strike a balance for your family?

And Then There Were Two: The Many Emotions of Growing a...