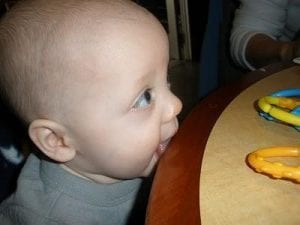 With Mommy Wars raging all around us, I’m hesitant to divide parents into two different camps, but over the past six years, I’ve noticed there are two types of parents. I’m sorry to be so tough about it, but it’s true. You’re one or the other. You’re either a germophobe or a germophile.

Let me put it this way: a germophobe’s child gets bathed every day, while a germophile argues that bathing every day isn’t good for their skin. Neither is right, and neither is wrong. It’s just a parenting philosophy, but I’ve yet to find a parent that subscribes to both.

So which are you?

So there you go. And let’s be clear, there’s no judging here. Whether your kids wear clean jammies every night or if, like mine, their tongue has touched the handrail at the zoo.

What makes you a germophobe or germophile?