My son was baptized when he was 8 weeks old, and he hasn’t been back to church since.

He has, however, starting saying prayers, and we’ve been actively reading The Jesus Storybook Bible since he was a year old.

I am Catholic, and my husband is Presbyterian. At one time, I was very connected to my faith and very involved in the church. As time has gone on, I have practiced my faith at home and at mass on occasion, but not as often as I would like (or should). With the arrival of Pope Francis, my desire to practice my faith has become stronger. My husband, though, does not really have much of a feeling one way or another, and he is amenable to raising our son Catholic.

Why we haven’t taken him to church yet

But I have failed at this. For the last 2.5 years, my biggest fear is that we will go to church and that our son will be loud, talk, make a racket and be disruptive to the other parishioners. I don’t want him to go to church and associate it with anything bad or being fussed or getting dirty looks when he fidgets or talks out of turn. I remember being young and having older parishioners shush me or give me a look when I would fidget out of boredom and being unable to understand fully what was going on. I don’t want my son to have a similar feeling about the church.

Instead of having this happen, I have just avoided going with him altogether. Our church no longer has a cry room, and I’m just not sure of how to adapt to going to mass with him regularly. Honestly, sometimes I wish there was a children’s mass where the typical routine was a little more lax, the mass was shorter and more exciting for a small child. When I was young, I sort of loathed going to mass and often used it as an opportunity to try go back to sleep, read through the hymnals, or annoy my parents to go home, and I didn’t get much out of the experience. Sometimes I wonder if there is a church out there that caters to small children.

As I grew older, I learned more and began to enjoy the message. We wholeheartedly want our son to have a relationship with God, and while we are choosing to raise him Catholic, we are also fully open to him choosing whichever religious path he is most comfortable. I’m not sure where to start. I know that when we drive past church, Andrew says, “Jesus’ House!” but what else will he understand? At what age do we really start to teach them about religion, spirituality, and faith? How do we go about doing so? How do we have them assimilate into the church experience where they can enjoy and learn about their faith at such a young age? 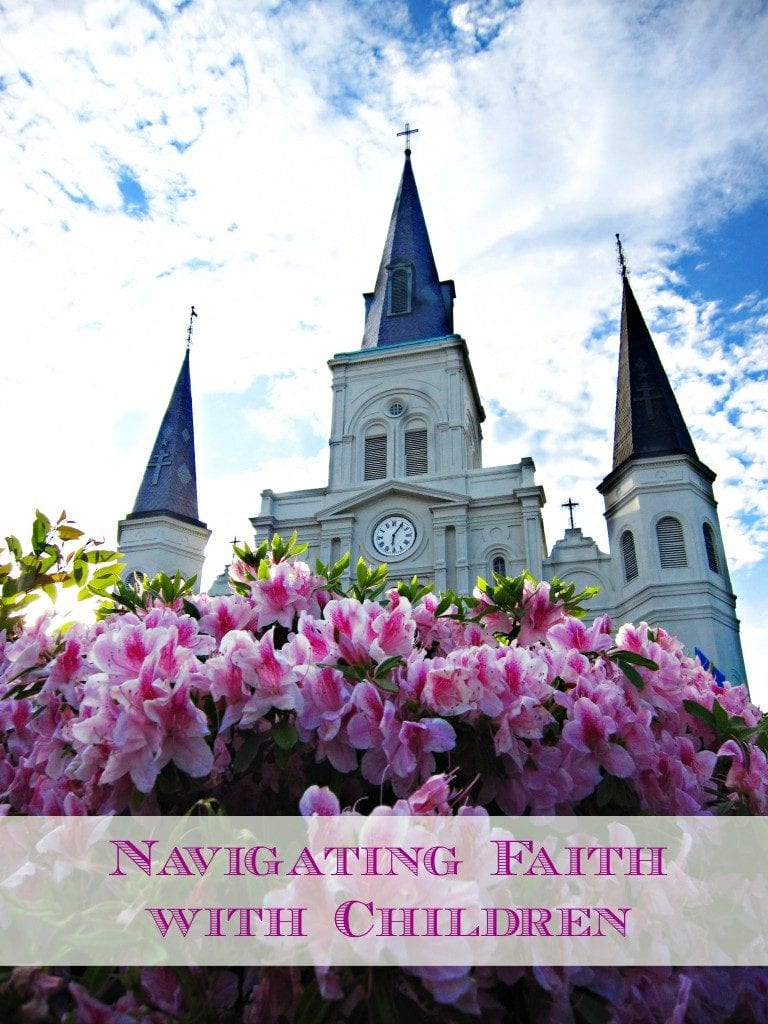 When it comes to prayers, we are also struggling. We read from our Jesus Storybook Bible pretty regularly, as the bible stories are written in a way that kids can understand and relate to. (Who am I kidding, it makes it easier for ME to understand, too!) We also have a Veggie Tales devotional book that is great with little prayers and lessons included; however I am concerned we are not doing enough.

We haven’t attempted to teach Andrew any of the traditional Catholic prayers yet, and we are not sure when to do so and the traditional bedtime prayers that come to mind feel morbid. (Now I lay me down to sleep… If I shall die before I wake…). Is it just me? When I try to get him to say a prayer, he sort of looks at me blankly, although he does hold his hands together. It is at these moments that I start to wonder, “Is this because he has never been to church?” “Am I failing him as a parent and as a Catholic/Christian?”

When it comes to parenting, it is always a work in progress. It is the same when it comes to faith and religion. I suppose we have taken some baby steps, but it seems like maybe now is the time to take that BIG step and go to mass.

How do you integrate faith and religion in your home? If you are Catholic, how do you adapt to mass with your toddler? What are your prayer suggestions for small children?