Those words were repeated over and over when I had my daughter. I had always suffered from anxiety but this anxiety was off the charts. It started as soon as I was in the hospital. I looked over at my newborn in her bed, terrified to touch her. What if she fell, had a seizure, or something awful happened? I chalked the thoughts up to normal first-time mother thoughts. I was new to this and admittedly had no idea what I was doing.

When we got home from the hospital, the feelings of dread and fear got worse. I rarely left the house. I felt 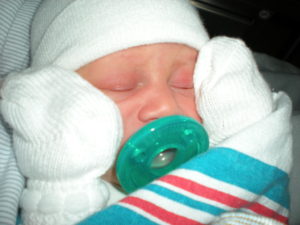 paralyzed. What if something happened to her?! And the thoughts. The awful, dreadful thoughts. I rarely spoke of them to anyone. I would have these visions of awful things happening to my sweet baby. At Target, I would think of her falling down the escalator. I’d cling on to her for dear life, stay as far away from the escalator as possible and use the elevator. One time, on a rare walk outside, I envisioned her being impaled by a plant (of all things). It was like I was living a real-life horror film starring the person that meant the most to me. The person that I prayed for, for years. I was too terrified to tell anyone for fear that they would take her away from me.

I just knew I was dying.

I’d have frequent panic attacks for no reason. I could not drive long distances away from the house and I often spent my time looking up crime stats and listening to the police radio online. I was also convinced that there was something seriously medically wrong with me. I went to the doctor for a suspected blood clot which came back negative. The doctor said it was anxiety. I rolled my eyes and headed home. Heart palpitations would bother me day and night. Obviously, I was having a heart attack. I went to a cardiologist who much to my surprise said I had the heart of a marathon runner. That could not be right. He, too, said I had anxiety. I had always suffered from anxiety, but this was a new form so I knew there had to me more to it. I knew I was dying; the doctors just couldn’t find the problem.

Coming to grips with the diagnosis…

After about ten or more fruitless doctor’s appointments, I finally went to a psychiatrist who diagnosed me with postpartum depression. I was put on medication, but had to stop breast feeding at six months, which saddened me. I wanted to breastfeed for at least a year and felt like a huge failure. I was in dark space and now had to stop feeding my child the way I wanted to. I wondered if we would we still feel bonded? Would she still love me? After weighing the pros and cons, I chose the medication. I knew it was only solution for me to become a better mother. Eventually, I started feeling better. The awful thoughts stopped and I was able to venture out more. The baby and I even took a trip together.

During those first few months after I had my daughter, I felt as though I was the worst mother ever, but this feeling was beyond my control. I needed help and wish I would have known more about postpartum depression before I started my pregnancy journey. I did not recognize the signs and instead sat in silence, suffering. If any of this resonates with you, I hope it helps. You are not alone and you cannot fix this alone. Reach out to a friend or loved one and get some help.  It will make you feel like your old self again.

Have any of you experienced unwanted thoughts post pregnancy?

Why You Should Join a Mardi Gras Dance Troupe STAT!

Jazzercise :: Checking Your Stereotypes at the Door