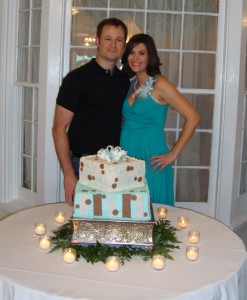 I am one of those individuals who really enjoyed being pregnant. After two weeks of nausea, it was smooth sailing. I exercised up until the week I gave birth, ate healthy (ok, I had a few chocolate éclairs here and there) and really focused on taking care of myself (yes, manis and pedis were a requirement). My OBGYN called me his “dream patient” – good blood pressure, proper weight gain and progression at the end of the pregnancy. Due to this, I expected my delivery to go just as smoothly. I imagined my water would break at home, and I would have time to get pretty, pack and leisurely drive to the hospital. God had other plans.

I was 37 weeks pregnant when I awoke with bad cramps. I assumed this was Braxton Hicks “false contractions.” After I went to work and the pain didn’t subside, I called my doctor. He said to walk around, take Tylenol and call him if it got worse. There were some moments throughout the day where I stopped talking and held on to my desk until it passed. In hindsight, that was a contraction, and I should have called him. I kept thinking I was only 37 weeks, and the pain was not patterned or frequent enough to warrant it. I decided I would go for a swim in my parents’ pool.

I should mention that my husband had a 24-hour shift at the hospital, the main reason I was bound and determined I would not be having a baby that day. Additionally, I had big plans to attend French Quarter Fest the next day and indulge in a cochon de lait po-boy and Plum St. snowball. I had my priorities straight, clearly.

After the swim didn’t help, I tried to downplay my symptoms and accepted my parent’s invitation to dinner at Restaurant des Familles in Lafitte. For those unfamiliar with Lafitte, it’s south of New Orleans on the bayou, great for a yummy seafood dinner, fishing or swamp tour. While enjoying my delicious crab cake and timing my contractions, it hit me that I was 45 minutes from Touro Hospital. Probably not the best time to make a drive to Lafitte. Sensing my pain, my mom looked me square in the eye said, “you’re in labor.”  I retorted, “No, I’m not. You’re not a doctor, how do you know?” Boy, would I have to eat those words later! 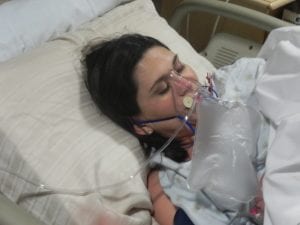 When we arrived back at my parents’ house at 9:00 pm, I ran to the bathroom with diarrhea. Afterwards, the pain subsided so I decided to head home – against my mother’s pleading. I had been trying to reach Josh for most of the evening at this point, but he was in a rare and ridiculously long surgery. So I called my sister in law, Courtney, a NICU nurse. She asked, “are you sure you’re ok?” I said, “I’m fine now, I just took a big shit and I feel much better.” She said, “Angelina, diarrhea is a sign of impending labor. You need to go to the hospital.” At this point, reality sunk in and I started to cry. “Josh is in surgery <gasp>, I can’t talk to him <sniff> and I am not doing this tonight!” Courtney knew this discussion was futile and vowed to get in touch with Josh for me. Once I was home I went to the bathroom again, this time with blood. Maybe a warm bath would help? As I was climbing in the tub, Josh called. I started sobbing as we timed my contractions. I am not sure how much time passed, but they went from eight minutes apart to five minutes apart rather quickly. We called the doctor and were told to head to the hospital. Now I had to get myself out of the tub, get dressed, gather my things, and wait for my husband. I later learned that he drove about 100 mph on the way home, but it seemed like an eternity. My typically very calm and collected husband was flustered and scrambling. We rushed out of the house and started on the 15 minute drive to the hospital.

As we reached Tchoupitoulas, my contractions were two minutes apart. It was the picture of a perfect labor movie scene. We arrived at Touro, and Josh deposited me in a wheelchair in the ER while he parked the car. I knew I was supposed to go straight to labor and delivery, but there was no way I was getting there alone at this point. The employee at the front desk insisted on ‘checking me in’ and asking registration questions. In between contractions, I am trying to tell her that I am pre-registered, the doctor is on his way, please just call L&D to come get me. Josh returns to the ER and says, “why are you still here?” I yelled, “I don’t know, maybe you should ask this bitch here why!” Thankfully, two L&D nurses arrived to collect me and said “wow, you really are two minutes apart.” What the heck did they think, I was joking?! 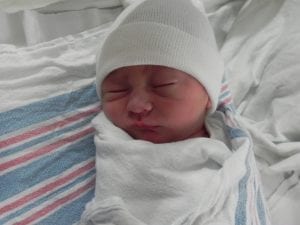 Thank baby Jesus, I received a room and a really nice nurse right away. Her eyes grew wide when she examined me and announced that I was already eight centimeters dilated. I immediately told her I wanted an epidural and PLEASE call anesthesia. I always planned on an epidural, so I didn’t take Lamaze. The nurse kept telling me to breathe, but I was struggling to make it through without holding my breath. She finally said, “if you don’t stop holding your breath, you’re going to push this baby out without an epidural.” That got my attention and forced me to breathe. The anesthesiologist arrived and questioned, “Why did you wait so long to come to the hospital?” I could have screamed but opted to keep quiet since he was the one with the giant needle. I was given a spinal instead of an epidural because it would take effect faster. Shortly after, the doctor arrived. He downed a cup of coffee, broke my water and asked me if I was ready to push. I said, “but I just got here! I’m finally comfortable!” He said, “you’re 10 centimeters and it’s time. I’ll do my best to keep you from tearing, this will likely go quickly.” Super.

Twenty minutes later, at 12:42 am, I gave birth to my healthy 5 lb 14 oz baby boy, Jude. I never imagined that I could immediately love someone so immensely. I especially never imagined that I would be spread eagle, receiving stitches, with multiple strangers in the room and could have cared less. All that mattered, for the rest of my life, was this little boy.