Okay… I know I’m not the first mom to ever write about the magic of the hit Australian cartoon Bluey. What is it about this family of blue heeler dogs that captivates my children AND my husband and me? Is it the precious accents? Is it the lack of bad guys or menacing antagonists? Is it how completely the show captures life at home with kids? Is it the humor with just enough adult jokes to keep me laughing along with my three year old? 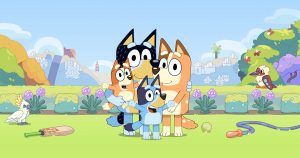 Answer: it’s all of the above. And then some.

I’ve got to add my voice to all the others singing its praises, and if I have to watch a show about dogs with my toddler, I’d much prefer this to Paw Patrol. (And don’t get me wrong, we watch a lot of Paw Patrol, too.)

What I especially love is just how normal everything is in the show: Bluey and her sister Bingo imagine elaborate games, problem solve, play together, and work through arguments against the backdrop of family life with their parents, Chili and Bandit. Sometimes they learn a life lesson at the end of an episode, and sometimes they just play– and I love both kinds of endings.

Now, I’ll be the first to admit it’s not a perfect show. Sometimes I think the kids get away with way more than I’d let my own kids do, or I think they don’t always show enough consequences. And speaking as someone with a wealth of my own control issues, sometimes I think Bluey can get a little bit too demanding with the rules of her games. But at the end of the day, the show really is just goodhearted fun that I’m more than happy to let my son watch to encourage and foster his own little games.

As much as I’m hoping my son is learning about the joy of imagination, I also think I’m learning from Bluey’s parents. Mama Chili is one of the most laid-back cartoon moms I can think of, despite having two very active and playful kids. Not much ruffles her feathers (er, fur), although it’s always amusing to see what does get under her skin. And Bandit is such a refreshingly constant presence in his kids’ lives, almost always around to play and make memories with them.

I know they’re just written characters. I know their actions are scripted and that no parent is that perfect. But their willingness to get down and play, to fully engage with their kids, is a good goal for me to imitate. Although a couple of episodes show Chili getting frustrated or Bandit not wanting to play, for the most part, they’re happy to imagine right alongside their children. It inspires me to put my phone away and allow my son to walk me into his imaginary world. I want to be as chill as Chili is and to bond with my boy the way Bandit bonds with his kids. I think play is such an incredibly important component in our kids’ lives– it’s how they learn, how they figure out interacting with others, and how they decipher this crazy world around us.

If your kids haven’t discovered Bluey, I highly recommend it– for both your child and you!

If you do already watch Bluey… what’s your kid’s favorite episode? Or perhaps the real question is… what’s YOURS?

Worth the Drive from New Orleans :: Mississippi Aquarium