I love my three year old’s toes. I think his little feet are so adorable, and I generally find feet pretty gross. I promise, I have a point. As I snuggled next to him in his toddler bed, I was holding his little toes, admiring how precious they were. He was talking to me about his day at preschool, begging me for “one more minute” of laying with him. It was then that I thought, “my six year old’s toes don’t look like this anymore. His voice doesn’t sound the same. They are growing up and these are the last baby toes I’ll ever have. We said we were only having two kids … but what if I wasn’t done?” 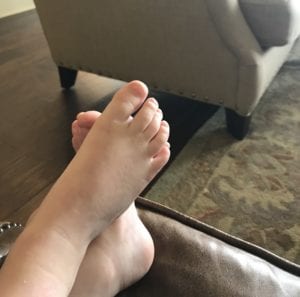 We had a plan

Surprisingly, there was a time when I wasn’t sure I even wanted kids. They had snotty noses, they were loud, and they didn’t sleep. It frightened me. My husband even said there was a time he was worried I wouldn’t come around to the idea. About six years into our marriage, I suddenly had baby fever. Four months later, I was pregnant. We discussed two kids from the get go, regardless of the sex. I’m an only child and talked to the dog a lot. I knew I wanted my children to have a sibling so they could have a “person.”

After my second son was born three years later, my family felt complete. We talked about it and decided we were done making babies. And having two kids was no joke – this is HARD. God bless those of you who have 3+ kids because going from 1 to 2 was a game changer. Yet now that my youngest is three, things are getting easier. And I can’t help but wonder what a bigger family would be like. Logistically though, I know it would be hard. My husband works long hours, my father is on hospice, and I recently launched a new business. Every morning and most afternoons, I am flying solo. I don’t mind it, but throw in a third and talk about chaos. Not to mention my six year still wakes up at night.

When I talk it through, it sounds nuts. But gosh, they are growing up so fast. I know one day I’ll wake up and they won’t need me anymore. I’ll be peeing in the bathroom, alone, wishing someone was keeping me company. I’ll sleep all night and wake up, missing that foot in my face. I won’t hear “Mommy!” every 30 seconds and feel like it’s too quiet. For now, I will treasure these little moments. The late night snuggles, the little voices, their toes, even the dirty floors. Being a mom is the hardest but most rewarding thing I’ve ever done.

Crap I Never Accomplish :: 4 Reasons Why