Everywhere I go, I’m always asked the same question: “Where are you from?” I get it. Like the rest of my background, my unique accent tends to seem out of place. I’m a military brat. It’s been a wonderful and miserable experience.

No sense of home and time-limited friendships 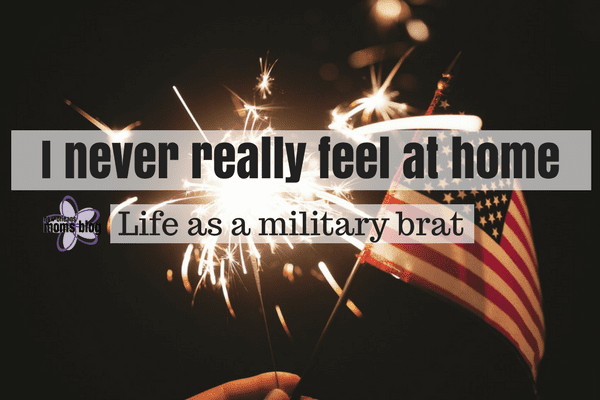 My parents are from the same city, and though most of my extended family lives there, I have never lived there. I’m the only person in my family born where I was born, and after living there about 3 years, I’ve never returned. Place of origin and home are weird concepts for me.

Between our moves and the moves of those around us, change was constant. Friends and neighbors came and went, and in the days of letter writing and long distance calls, most of the time those goodbyes were forever, so when I found a friend I held on tight because neither of us knew how long we’d have before we’d be starting over again.

As part of my revolving life, I learned there are a lot of people in the world. So many people, so many places, and so much food. At one neighbor’s house, I had English tea and biscuits. At my favorite birthday parties, I gorged myself on lumpia until I ached. At other houses, I snacked on imitation crab or sticky sweet midwestern desserts. These experiences are some of my favorites as I have no idea how and when I’d been introduced to such a variety of food so early on otherwise.

With families from all over, the variety of goings-on was great. I’d decline an offer to play with freshly cut squirrel tails courtesy of my friend’s dad’s successful morning hunt, and instead, I’d settle in to watch anime on well-worn VHS tapes down the street.

Though the snacks, language, TV shows, and decor varied greatly throughout my neighborhood, the major differences I noticed were that some people were nice, and some were not, and you couldn’t tell which type they were by looking. You had to spend time together to see.

With the small lots, lack of fences, and abundant gossip, there was no shortage of opportunities to see and hear. You learn a lot about people when you share walls as we did in those tightly packed townhouses.

Distance from family: much worse than just not having free babysitters

As if it weren’t enough to weather the stress of international conflicts separating the family on and off through the years, the isolation and homesickness that resulted from not getting to choose where you live can be intense. I learned to feel lucky that my grandparents were only a 12-hour drive away instead of a flight across the Pacific, so we could see them at least once if not twice a year versus the years between visits some of my friends’ families faced.

Still, the distance was challenging especially as my grandparents aged. Visits back “home” often went on an extra day or two than planned because it was so hard to leave. Despite their best efforts, neither of my parents was able to be there when their parents passed away. Geography can be unforgiving.

Though I hated many challenges of military life such as deployment, I consider myself lucky to have learned to build communities and celebrate differences, instead of finding them threatening. It’s a lonely life on base if you can’t figure out how to keep reaching out. These lessons have served me well as we’ve moved for my husband’s job in academia.

My kids are growing up academic kids instead of military brats. Though some of their experiences will be similar to mine, they have a much easier road with the class differences alone. Still, I am grateful to be connected to a diverse, semi-nomadic, international community for that is my normal and the closest to “home” I ever feel.

Dear Stranger, Why Did You Assume I Was an Unmarried Pregnant...

How I Made Peace with NOLA Traffic