Yes, you read that correctly. I gave up coffee—for the time being at least. Don’t get me wrong, I love coffee. I love the flavor. I love the comfort that comes with sipping from that steaming cup. I love the inviting aroma that seems to speak “Hello, friend, come sit with me awhile.” I love the hum and bustle of a coffee shop and the promise of an upturned cup on a dinner table announcing its accompaniment with the dessert to come. And being from New Orleans, I love how it is such a delightful part of our culture.

So with all this love, why give it up?

Despite my love for coffee, I began to suspect it wasn’t loving me as kindly in return. I became increasingly irritable when I didn’t have any. Each afternoon I’d hit a slump that seemed to be cured only by another cup. My relationship with coffee had evolved into something verging on an unhealthy dependence. I didn’t love how much I needed it and began to suspect that it was aggravating other problems as well, namely an onset of recurring anxiety attacks and a lack of energy overall.

We needed a break. It was time to see other beverages.

At first, I missed it quite a bit, especially in the mornings. After all, there’s nothing quite like waking up to hot, freshly brewed coffee. However, after only a few days, I started noticing some pretty incredible changes:

Over the last year especially, I began experiencing anxiety attacks. Sometimes they last a few hours, sometimes a few days. I don’t believe coffee is the culprit per se. In fact, I feel certain my anxiety is mostly, if not all, due to current life situations. However, I’ve heard multiple people express having to give up coffee because of its effect on their anxiety levels. While I haven’t noticed any direct correlation between finishing a cup of coffee and then feeling anxious, I began to wonder if my daily intake was exacerbating the problem.

I can’t say for certain that because I’m not drinking coffee I won’t have another anxiety attack, but I’m currently clocking a month without coffee and a month without any real anxiety. I did have a brief episode of feeling flustered and thought I was headed for another attack, but then it passed without incident. Maybe staying away from coffee is allowing me to handle life a bit better right now.

I’ve reignited my passion for tea.

I gave up coffee but not caffeine. I’ve always loved tea, but since becoming a mom it had begun to take quite the backseat in favor of the stronger, bolder cup o’ joe. With my French press now high on a shelf, I moved my tea stash to the more prominent place on the counter.

If you haven’t fallen in love with tea, give yourself the chance to do so. The world of tea is one of varied fragrances and color. Some teas are light, subtle, and flowery. Some are rich, vibrant, and dark. Plus, tea is a great source of antioxidants.

While tea does still have caffeine, it typically has less than coffee does. And it has this wonderful and seemingly magical property called L-Theanine, which has a calming effect. Thus, while it does energize you, tea naturally tempers that pep creating a healthy, happy balance. 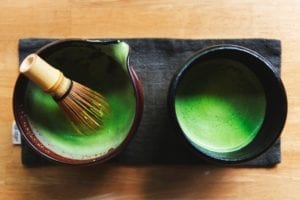 I’m better able to wake up on my own and have more sustained energy throughout the day.

Coffee is wonderful for that jolt of energy in the morning, but it’s also notorious for becoming addictive. Literally.

Once I adjusted to the lesser amount of caffeine of my new morning tea habit, my body adjusted to functioning better without caffeine in general. Soon enough I could wake up and be decently functional pre-cup-of-tea, unlike before when no amount of life could happen before at least half my cup of coffee was running through my veins.

I also noticed that I’ve begun to need less caffeine throughout the day. Instead of experiencing a drastic draining of energy a few hours after having coffee, I’m now sometimes well into the afternoon before feeling like I need a pick-me-up.

This has been the most bizarre and unexpected change I’ve experienced since giving up coffee. I had always been a frequent dreamer. In my pre-mom life when my head hit the pillow, I never knew what wild adventure would ensue. Ever since being pregnant and having my daughter, who is now two-and-a-half, dreams rarely happen, if at all. I always chalked it up to another strange change that occurred with becoming a mom. I hadn’t thought about its possible connection to my coffee intake, which had become a daily occurrence at about the same time (go figure).

But just a few days after giving up coffee, I began to have dreams again, almost every night, too. I’m no doctor, but it seems that having coffee every day, even only a cup in the morning sometimes, had an effect on how deeply I was able to sleep at night.

So now I dream regularly once again. Hugh Jackman even made a cameo a few nights ago, and I’m not complaining.

Will I ever get back into a relationship with my daily coffee? Perhaps someday. However, for now I think we’re better off as friends.

Thank You for Loving Her While I’m Away :: A Letter...

Making Time for Those We Love Even When Life Gets Busy