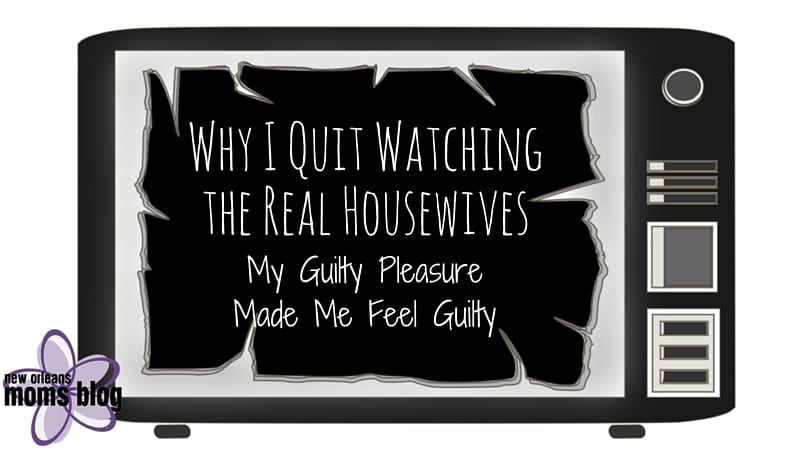 I have been watching the Real Housewives since the OC series first went on the air about nine years ago. One crazy cat fight and I was hooked! It became my guilty pleasure. As the franchises grew, so did my DVR list to include NYC, Atlanta, Miami, New Jersey, D.C., Beverly Hills, and even Melbourne. I loved their drama, pseudo-scandals, silliness, lavish vacations, all of it. I followed every detail of their lives and probably knew more about Kim Zolciak and Vicky Gunvalson than I did about my own best friends.

But more recently, I’d been dreading clicking “play.” I would let three or four episodes build up before finally watching, and then I’d just feel, for lack of a better word, icky the whole time I watched. Finally, as I laid in bed at 11pm one night cringing through another episode of the Orange County franchise, it occurred to me that maybe I shouldn’t be watching a show that made me feel, well, icky. So, I went through, deleted them all from my DVR, and started binge watching the Good Wife instead. 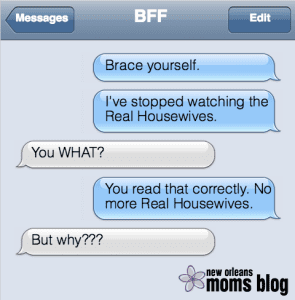 The next day, I relayed my decision to my BFF/Housewives gossip buddy. I told her I’d given up on the Housewives due to the ick factor. After the initial shock wore off, she asked me why it was making me feel icky. She’s a therapist, so I should have known I was headed for some head shrinking, right? Here’s what we figured out …

The ick feeling was actually guilt.

All of these women’s lives seem to fall apart as the show progresses. I know that I’m not directly responsible for this, anymore than I am for any other celebrity gossip that I may consume, but I still feel that I’m a party to it. I also know that they willingly sign up for these shows, understanding what it entails, but I can’t help but think that they all believe they’ll be “different.”

I don’t know anyone whose life could truly survive the microscope that is reality TV. Every white lie, every fight, every slight is magnified for everyone to see. What could be a little easily forgiven spat becomes the story line of an episode, topic of interviews, and rehashed conversation at a “reunion.”

Drama is manufactured to increase viewership.

Moreover, some of these women appear to have real emotional or mental problems, engage in seriously self destructive behavior, and need professional help. I feel wrong to watch their mental breakdowns as entertainment. When the women from NYC joke about Sonja or the Beverly Hills cast snickers about Kim, I want to scream, “Be a friend! Get her help!”

I can’t help but wonder – is it too much to ask for them to make a reality show about women who love and support each other? Imagine sitting down in front of your TV for 30 minutes to watch a group of women cheer for each other in success and comfort each other in failure. How empowering and inspiring could that show be? Perhaps I’m just too #blessed, but that’s the way the women in my life behave.

Those are the “real housewives” that I call friends.

Bravo, have your people call my people.

My Life as an Adult Orphan :: Parenting Without Parents