There are so many things to do with kids in New Orleans year round! We strive to share ideas for every family’s budget and interests. Whether you are visiting New Orleans with kids or you live in New Orleans year-round, there are tons of kid-friendly outings to choose from, including a visitt to Vue Orleans.

New Orleanians are used to viewing life from low elevations. After all, most of our city is at or below sea level. Some might say we’re not used to viewing things from great heights. Vue Orleans gives both tourists and residents a chance to enhance their perspective of the Crescent City — from towering heights 34 floors above the Mississippi River.

Located above the Four Seasons Hotel, in the former World Trade Center building at the riverside of Canal Street, Vue Orleans offers visitors an interactive, 4-D museum experience as well as stunning 360-degree panoramic views of the city from indoor and outdoor observation decks. Having opened in March 2022, Vue Orleans is one of the city’s newest attractions, and not yet included on most tourists’ itineraries.

My family decided to visit Vue Orleans shortly after Christmas, while my mom was visiting from Upstate New York. Like most frequent visitors to New Orleans, my mom has already experienced most of the “beaten path” attractions — the Roosevelt lobby lights, St. Charles Streetcar, Cafe du Monde, and Audubon Zoo. As we brainstormed “new” experiences, for this visit, my 13-year-old son suggested, “Vue Orleans!” 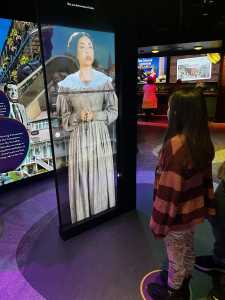 Once you pay admission and enter, Vue Orleans takes you on a truly immersive journey through New Orleans culture and history — so you can more authentically know the city you are about to view. The first exhibit teaches you about the different cultural groups of New Orleans through a projected timeline collage. Stories of local legends such as Marie Laveau, Jelly Roll Morton, and Henriette DeLille are told by actors with captions in English, French, and Spanish.

Through the use of hands-free technology, other exhibits celebrate the music, food, and customs of our city. The music exhibit allows visitors to step inside a huge gramophone and listen to the different genres of music that have originated in New Orleans, such as contemporary and traditional jazz, bounce, rhythm and blues, brass 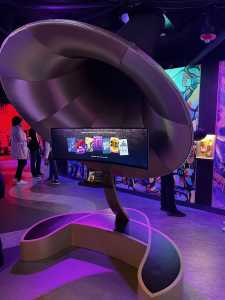 bands, and funk. “The Story Cafe” exhibit is a digital cafe where local chefs discuss and teach visitors how to make famous local dishes such as gumbo, jambalaya, and king cake. “Dress for the Fest” allows viewers to create their own Mardi-Gras-inspired costume combinations without physically touching any clothing. (My husband enjoyed transforming
into a jester here.)

Before stepping onto the elevator to go to the observation decks, visitors are treated to a short film about the history of New Orleans in the Vue River Theatre, starting with the first Native American tribes who began a trade center here hundreds of years ago. Narrated by Irma Thomas, the film takes visitors through beautiful, seemingly painted panoramic scenes throughout our city’s complicated and controversial past in about ten minutes.

The elevators to the 33rd floor are their own attraction. On the way up, the elevated windows illustrate more of the city’s colorful history while the ride down shows viewers our city from different perspectives at night.

The observation decks are obviously the big draw of Vue Orleans, and with good reason. The predictably stunning views managed to surpass our expectations. You’ve definitely never seen our city like this! We visited Vue on a clear, mild day and were able to see Lake Pontchartrain to the North, the Industrial Canal and Danziger Bridge to the East, Algiers Point and the West Bank to our South, and the Crescent City Connection (and beyond) to our West. We saw red streetcars travel up and down Canal Street, marveled as ships navigated the English Turn, and followed the bends of the Mississippi River as far as our eyes would let us, imagining where it would meet the Gulf of Mexico.

Besides the views, the interactive gadgets and memorable film on the 33rd-floor indoor deck were also surprising. Vue Finder screens can be pointed in any direction to showcase and detail the city’s neighborhoods and historical landmarks. My son (a fan of all things tech) visited every single one. Another station allowed you to interactively steer a cargo ship around the English turn– and is narrated by a simulated pilot (“We avoided the barge, but now we might crash into the bank!”)

The Indoor Observation Deck also includes a short film narrated by the celebrated professor, filmmaker, and historian Henry Louis Gates, Jr. Called “Rising Up: Black New Orleanians leading the Nation in the Pursuit of Equal Rights,” the film details the struggles for equality in New Orleans and across Louisiana. Black New Orleanians’ contributions to the state constitution, as well as the local impact of the Plessy vs. Ferguson case in 1896, and later Brown v. Board of Education in 1954, are also discussed.

Another elevator ride (this one is just one floor up) takes you up to the Outdoor Observation Deck and Vue Orleans Cafe on the 34th floor. Visitors can grab snacks or drinks before or after heading outside for the best (and windiest) views of the Crescent City. Tall, thick glass shields and protects you from danger while allowing for crystal-clear photography (trust me, you simply won’t be able to take enough pictures). Viewing the Big Easy from such heights gives you a new appreciation for the eclectic beauty of our one-of-a-kind city. From the 34th floor, humans are just little scurrying ants. Potholes are the size of periods at the end of a sentence. Construction zones are a small pile of legos. The beautiful diversity and heritage of our city are vast. Vue Orleans is a must-see for tourists and locals alike

Why Vue Orleans Surprised Us

No other attraction in New Orleans offers 360-degree views of our city from such heights.
It’s the first local attraction I’ve been to that feels on par with similar experiences in major cities such as Chicago and New York. Vue Orleans was also not super crowded. We visited just days before the Sugar Bowl and none of the tourists that clogged the French Quarter had migrated there. Which is unfortunate for them. Be sure to check out Vue Orleans before the throngs of Mardi Gras tourists discover this new (not so secret) secret!

My family was also surprised that Vue didn’t cost more. Granted, it’s not cheap. But compared to what going to the Empire State Building, Top of the Rock, or 360 Chicago will cost you, this is definitely less. Louisiana residents pay $19.95, compared to $24.95 for out-of-state adults. Further discounts are given for military families, college students, large groups, seniors, and Four Seasons hotel guests.

Moreover, as history teachers, my husband and I loved that the Vue Orleans exhibits included inclusive films and facts that didn’t gloss over history. The cultural contributions, hardships, and triumphs of many diverse groups are included as part of our city’s story.

Be sure to track the weather before you go. A clear, low-humidity day will definitely offer the best views– and it’s windy on top no matter what. Be sure to bring proof of your Louisiana residency for discounted admission. Also, consider easy side trips. My family parked our car at the Algiers Ferry on the Westbank and crossed the river before making the short walk to Vue Orleans. Once we made it to the 33rd floor, we enjoyed watching the same ferry shuttle across the river as the size of a matchbox car. This also saved us more money than parking downtown (though Vue Orleans does offer $5 off parking at participating lots). Vue Orleans is also a short walk to the Audubon Aquarium/Insectarium (when it re-opens in summer 2023), and is right near a Canal Streetcar stop. You could even visit it before or after hopping on a cruise ship, as it’s right by the docks!

Above all, bring your camera — whether it’s on a phone or tripod. You will definitely want to remember and revisit the unforgettable views you see in our unique city.

Staying Home for the Holidays: Making the Most of It