Why Growing Up in New Orleans Was The Best … And What We Miss!

Several years ago my family and I headed over to Bent Marine & RV on Airline Highway to pick up some camping (Louisiana has some of the best) and fishing necessities. When we pulled into their parking lot, I had an immediate flashback to the summer of 1984 in that same exact location.

It was a typical hot summer day, except I was only 7 years old and it was Kids’ Week at Schwegmann’s! It was so exciting; I got a grab bag of goodies and a free snack that day 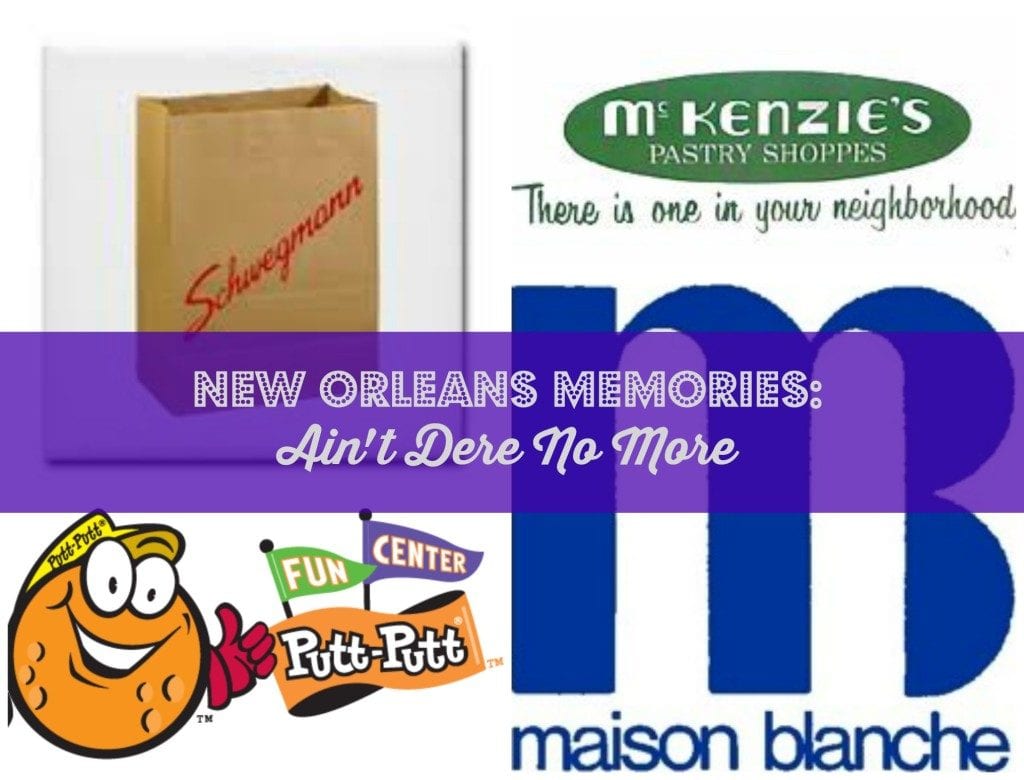 while we shopped. I thought I had won the lottery, especially when my mom let my 16 year old sister and I stay with the groceries in the “cart parking” while she walked to our sky blue 1980 Bonneville to drive it over to load up groceries.

I know I am not alone when it comes to reminiscing about New Orleans past, as there is even a dedicated Facebook group for the NOLA that Ain’t ‘dere No More. Sometimes I will catch episodes of documentaries on WYES that show footage and clippings from my younger years and all of the New Orleans childhood memories come flooding back. There is no doubt that when you are from New Orleans all parts of the city are parts of you, and you are as proud of the past as you are of the future. With that in mind, I thought it would be fun to recall some of those New Orleans places and things that come to mind when we hear that line Ain’t ‘dere No More!

I believe Schwegmann’s was the original “super center” back in the 70’s and 80’s. There is no doubt that these orange & blue grocery stores were the prime spot in the metro area for your shopping needs. My mom was a big fan of Schwegmann’s. Every Wednesday, she would pile us up in the car to “make groceries,” where she would score amazing deals on just about anything you could imagine. I vividly remember walking in to the delicious smells coming from the lunch counter and watching the checkers donning their aprons while they put all of our groceries in those famous paper bags. Perhaps the one thing that stands in my mind the most about Schwegmann’s, though, is the “cart parking” they had around the perimeter of the store. Back then, you could park your groceries right outside between the two markers and then pull your car up to unload so that your buggy stayed close to the store. Oh, and it was always a special occasion when it was “Kid’s Week” at Schwegmann’s. I will never forget seeing R2D2 there once! What do you remember most about shopping at Schwegmann’s?

I never had the joy of going to the Trampoline Jump Center (or Trampoline World), which was near the corner of Bonnabel & Veterans Boulevard, but I have been assured it was one of the most popular places for fun. Home to oodles of trampolines and sprinklers, it was also a popular location for a birthday party during the peak of the 80’s and 90’s.  Can you imagine if we started a business today that involved wet kids on rusty trampolines? Don’t get me wrong; it sounds like the perfect way to wear kids out for a nap. But I can’t imagine that this business would fly today. Rest in peace, Trampoline World. You were the stuff dreams were made of in the 80s.

Remember the catchy little jingle that went along with the commercials for Fun Factory? I never got to go to a birthday party there, but I have fond memories of those commercials. Also, two words. Cheeze Maze. That is all. While I never had a party there, I always wanted one, but now I am curious, did any of YOU ever have a party there? 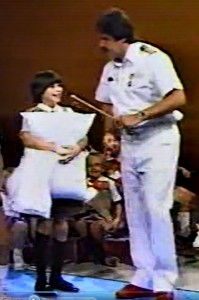 Now this is something I can recall first hand. It was a hot summer day when I wore my Brownie uniform and piled into a car with some of my fellow Brownies to head downtown to be on Popeye & Pals. I will never forget that day, it was SO FUN! There was nothing greater than munching down on some Popeye’s chicken while you watched cartoons and played games…and you were on TV!!! On that particular day, I was lucky enough to win a prize AND I got the winning cake ticket! That was an awesome day. I remember watching it religiously on Saturday mornings so I could look to see the name of anyone I knew in the birthday list! Just a few years ago, a friend found the video of when we were on Popeye & Pals and gave me a copy. I crack up every time I see myself in that video. Did any of y’all ever go on Popeye & Pals? 1-2-3…. Roll ‘Em!

I don’t know about all of you, but every August, my mom took us on a drive out to Metairie to go school shopping at Maison Blanche. Also, when we were done, she would take us for a haircut as well! Then, in December, I always looked forward to seeing Santa and Mr. Bingle. Every year, Santa was sure to bring me a stuffed Mr. Bingle for the holiday. To this day, I still have a pretty significant collection of stuffed Mr. Bingle toys.

Up until the late 90’s, friends and I would go to the old Lakeside Cinema on Veterans (where Office Depot is now) to take in a viewing of the Rocky Horror Picture Show at midnight. I have some fun and hilarious memories of going to this show where I came home drenched and my clothes filled with rice. It was so much fun to act crazy in a theater, dance in the aisles to the Time Warp, and throw rice in the air! Water guns were great for making “rain,” and there were almost always costumed “actors’ impersonating the movie’s characters. These days, showings of the classic movie are hard to come by, but I hear the Prytania does showings on occasion. Anyone else remember throwing toast and doing the time warp in the aisles of the theater?

This place had its heyday during my junior high and high school years and was the scene for many date nights. While the pizza here was less than mediocre, I had a ton of fun at the Metairie location. I often went home from visits to Celebration Station with pockets full of tickets or trinkets and a face full of black track debris from driving go carts all night. Or, if I was lucky, I got splashed while riding bumper boats and was able to cool off in the oppressive heat. Who else remembers trying to climb into the “house” on the miniature golf course? Ok, maybe it was only me, then.

I remember the commercial back in the day. “Putt Putt for the fun of it!” It was always a special occasion to head on over to Putt Putt in Metairie. In fact, one of the last memories I have from Putt Putt are from my freshman year of high school. I went with a few friends to play for a birthday, and I recall putting a ball so hard, it flew into the Burger King parking lot next door. That was a fun night. I think it was around 11:00pm at night while we were still playing. Many fun nights were had at Putt Putt back in the 80’s and early 90’s.

Every Sunday morning, New Orleans area kids behaved in church for their parents with the promise of a delicious donut or buttermilk drop from McKenzie’s Bakery, am I right? Let’s also add that Mardi Gras wasn’t complete until you had your slice of king cake from the bakery that graced our tables since the Depression era. I know I cried a little when McKenzie’s officially went out of business in 2001. What was YOUR favorite McKenzie’s treat?

Of course, this is just a small sampling of the memories of places and things we enjoyed in the old New Orleans, and if I were to list them all, this post would be REALLY long. We are curious…what some places you remember from your childhood in New Orleans?

Captured MOMents: I got an SLR for Christmas … what next?