How I Made Peace with NOLA Traffic

I used to hate traffic. I hated knowing my exit was only two miles away but not knowing if it would take me 2 minutes or 20 minutes to get there. I hated the neverending construction and its resulting congestion; then one day, all that changed.

I was stuck for 40 minutes in a 3-mile stretch on I-10 between Kenner and Metairie. Despite leaving an hour and a half before show time, I, my new friend, and our 3-year-olds were missing Frozen on Ice. As we sat staring at the same bumper, the clock was the only thing that seemed to be moving.

Normally I would have been furious, but I looked in the backseat and saw our kids happily watching a DVD. They had no concept of what they were missing.

When my friend began to stress about the show, I told her how I got the tickets.

The night before I received a text from a friend. His family had 4 tickets that they couldn’t use, and they were hoping I’d be able to use them so they wouldn’t go to waste. He didn’t want any money for them, which was great since I wasn’t working at the time. He just wanted someone to have fun.

See, this friend who had been the best man in our wedding, who my husband had known since childhood, this friend has a bab 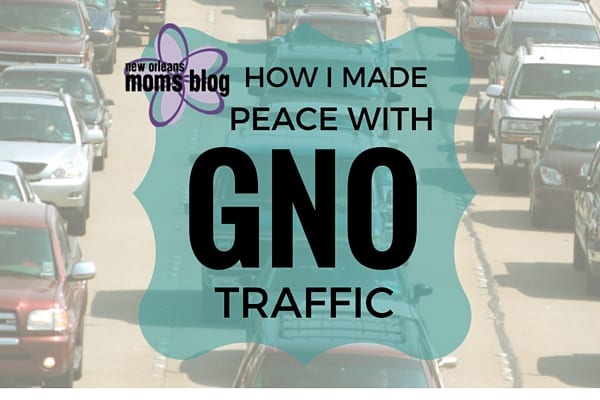 I had wanted to go see the show, but it wasn’t in our budget, so presented the chance, I was excited and then immediately sad. I felt bad benefiting from their misfortune, but his wife said that they were honestly just grateful treatments were going well and that they weren’t at all thinking about missing that show but instead looking forward to the future shows their children will see.

So while we were stuck there on I-10, I told my friend, “yeah this traffic sucks, and it sucks the show has started and we’re not there, but if my friends who gave us these tickets can make the best of it, so can we.”

As our kids giggled behind us, we told each other our lives stories, how we met our husbands, our relationships with our in-laws, our upcoming travel plans. We had only known each other a few months from story time at the library and dance class, so this unexpected gab time in the car was like meeting for coffee, only we were stuck on the interstate. We chatted and slowly traffic moved. Then after we passed Veterans, it was like there was never any congestion, and we sailed to the arena.

We parked, walked in with lots of other people who too had been stuck. We made it to our seats just as Elsa skated out to “Let it go.” The kids were amazed. We caught 60% of the show. Months later, my son is still talking about the ice monster. For me, I’m a changed person.

Instead of focusing on that 40% of the show we missed despite our planning, I remember laughing with my new friend.

I remember how happy my son was in the backseat with his new friend, which is huge because months before he had told me he was lonely, wanted his old friends and school, and I promised him he’d have new friends soon. I remember the kids’ amazement over the performers dancing on the ice.

Yes, this GNO traffic is annoying from downtown to the Causeway to the interstates, but if I want to live in a place with all the food, fun, and entertainment options, plus all the amazing people who love to get out just like I do, there’s going to be traffic. It’s not an attack against me or my plans. It’s just par for the course.

These days I remind myself that traffic is temporary, and so is life.

My anger and frustration have never made a single car move, but embracing a grateful perspective has sure helped me pass the time.