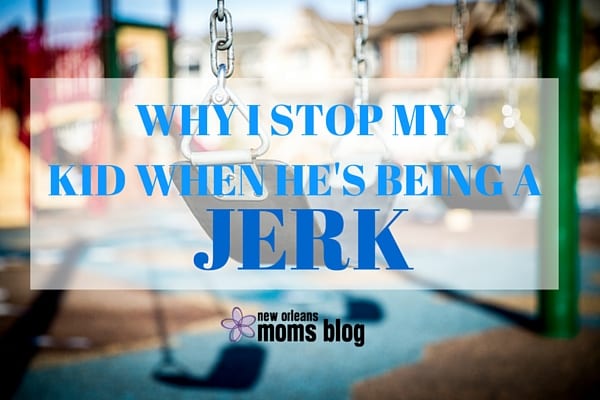 It’s happening more and more at the playground. The kids will be playing. My son will be inconsiderate. Nothing terrible, just jumping ahead of someone in line, not respecting personal space, forgetting his manners, and I’ll speak up and remind him to be nice. A well-meaning parent will tell me, “It’s ok. I like for them to work it out.”

Or worse, like this big kid who tried to get my son to scoot on some thorny weeds. I had watched him purposefully aiming for the little kids at the bottom of the hill and knocking them down and pretending it was an accident, but when he set his sights on mine, I moved in.

I get it. Helicopter parenting is out now. Letting kids work out their own problems lets them really learn empathy. The idea is that when given the chance, eventually most kids will see that once they’ve hurt someone, MOST will feel bad about it and hopefully learn a deeper lesson and not repeat it. Most, in theory, but not all.

I’ve sat back on the playground bench and watched this play out with other people’s children. It makes me deeply uncomfortable. Sometimes it’s okay, like a child really won’t care for long if she didn’t get the swing she wanted. Being knocked down isn’t the worst thing especially if there are no tears or blood, but it’s not always easy for the other kid to shake. Sometimes kids do get hurt, and the aggressor feels bad. Sometimes kids just laugh and keep being mean. I want the park to be fun, light-hearted, not preschool Lord of the Flies. I’m not interested in letting it escalate to that point when a few quick words can stop it.

I can’t and I won’t sit back and let my kid be a jerk or let some other kid be a jerk in the hope of future payout. I’m not a fan of hoping aggressors come to eventually recognize their transgressions. I like to call them out. I like kids to know that adults are watching, and more than watching, that adults are paying attention and that they care.

I don’t believe my kid should suffer, so your kid can learn not to be a jerk.

Right now my son is 4. He’s becoming more independent every day, but he’s not there yet. He’s still a little kid. He’s learning what’s acceptable and looking to me and others to learn limits. I know he can learn a lot from tears, his and others, but I don’t believe that’s the best way.

I’m his mother. My purpose is to guide him to being a kind, strong person. I’m thrilled we’re beyond the stage where he needs constant monitoring, but sometimes, kids (and adults — I’m looking at you Mississippi and North Carolina) need reminders that it’s not ok to be a jerk.

I also have concerns because as a black male kid, the stakes are higher for my son when he’s seen as aggressive. I have little interest, especially with strangers, in letting the cards fall. I will tell my kid to be nice. I will tell my kid to go play somewhere else with something else with someone else. I will take my kid home if he or someone else is spoiling the park for others.

Don’t think I’m keeping five paces behind my little one and managing his play. I have no interest in that. I’m off with his baby sister, talking to my friends, and using the time to browse Facebook. I am keeping an ear and eye out for when words of guidance are needed, and I toss them in.

Call Your Kids, NOT Their Professors