I often wonder about the choices we make and how they direct us. What if I hadn’t gone away for college? What if I hadn’t made bad relationship choices? If I had spent more time studying and less time drinking my freshman year, would I be here? The answer is no, of course.

All of the choices I made, good and bad, stacked up like little life poker chips. I wouldn’t be who or where I am today if it weren’t for all of them. I don’t regret much, though I do think back on some things and feel disappointed with myself. But then I look at my imperfect but wonderful little life, and I’m thankful for most of the things I did.

I say all of this because of something that happened a couple of weeks ago. I got a Facebook message from an old friend asking for my address. Actually, she was my best friend from sixth grade through part of ninth grade. The friend whose house I went to almost every day, the friend I have hundreds of notes from, rode bikes with for hours, suffered through the awkward phase with, had silly crushes on boys we always hoped would notice us but knew never would. Music was our thing; we spent hours compiling mix tapes and top ten lists of the great 90’s grunge that spoke to our weird early teen hearts.

We set off to high school together, rare in this city. She would walk the block from her house to my house every morning and we’d ride the bus together. I fell into a group and she did too, or so I thought. I’m not really sure anymore of all the details, but after a few months she wasn’t happy, and I probably wasn’t the friend I should have been to her at the time. I remember trying to fix things, but not much else. One morning, she just didn’t walk to my house, and from then on the bus picked her up by hers. I remember the shock on everyone’s faces as they realized that we had fallen out, but I didn’t really know what else to do but to let her go her way. I knew she needed it. Ultimately, I wanted her to be happy because she was my friend.

Time passed and eventually we became cordial. Our circles were different, but the good thing about a nerdy high school is that just about everyone gets along. I missed her, though. More and more over time, I regretted not doing more to salvage our friendship. We went our separate ways in college and rarely ran into each other, even though we were still neighbors. Facebook allowed me to keep up with her in a basic sense – I was proud of her and all she accomplished. Occasionally, I’d write on her wall when a song came on the radio that reminded me of the old days.

So when she asked me for my address to mail me something she had found–a letter she had written me years ago, I was taken aback. I instantly assumed it was a note telling me what a terrible friend I’d been. She assured me it was nothing of the sort, the opposite, in fact, which left me confused and feeling guilty all over again for not doing enough to repair our friendship. 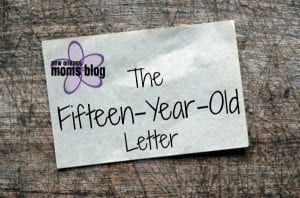 A card arrived with a long note dated this month, and in it the six-page letter dated 2000. My tears started with the first line of the card. She told me that she realized that I had been carrying the burden of our lost friendship for years, so when she discovered the note while cleaning her basement, she knew I needed to read it. She didn’t know why she never sent it, but the fact that it survived several cross-country moves spoke volumes. Basically, it was an olive branch that could have given us our friendship back fifteen years ago.

She gave me a gift the day the letter arrived. She lifted a weight off of my shoulders that I had been carrying for so long that I didn’t realize how heavy it had grown. With every page of it, I cried harder, not only because she had forgiven me, but that she told me the fault wasn’t entirely on me as I had come to believe over time. She felt all of it had resolved a decade ago; meanwhile, I had convinced myself that our dissolve was entirely my fault. She assured me that it wasn’t, and she now knows that the space was what she needed, even though it was hard. I’ve screwed up and been forgiven before, but there was something about this letter that gave me back a piece of my heart I thought was gone forever.

As I read it, I simultaneously wished she had sent it to me back in 2000, but also understood that maybe we both needed that time to find ourselves. I don’t know what would’ve happened if she had given me that letter junior year, and I think, in a way, we both wish she had. We would have had 15 more years of really good friendship, I think. I learned things from our relationship and our split that helped me navigate through other friendships. But would we be here? If I remember correctly, I was caught somewhere between clinically depressed mess and selfish jerk junior year, so I don’t know if I would have appreciated that letter quite like I do now.

What matters now is the choice she made to send me the letter. She chose to relieve me of the weight I’d been carrying. She gave me peace; she gave me resolve. I will never be able to thank her enough for that.

I Stopped Saying “No” to Saying “Yes”