Even after my daughter gave up on naps, we found that it was better for all of us if she still had quiet time for a couple of hours each afternoon. She didn’t have to go to sleep, but she had to stay in her room (and stay quiet) for two hours. The only “toys” in her bedroom are books, dolls and stuffed animals so she could play with those if she wanted. Most of the time, though, she ended up falling asleep after about thirty minutes or so. However, this came to a screeching halt about a month ago. 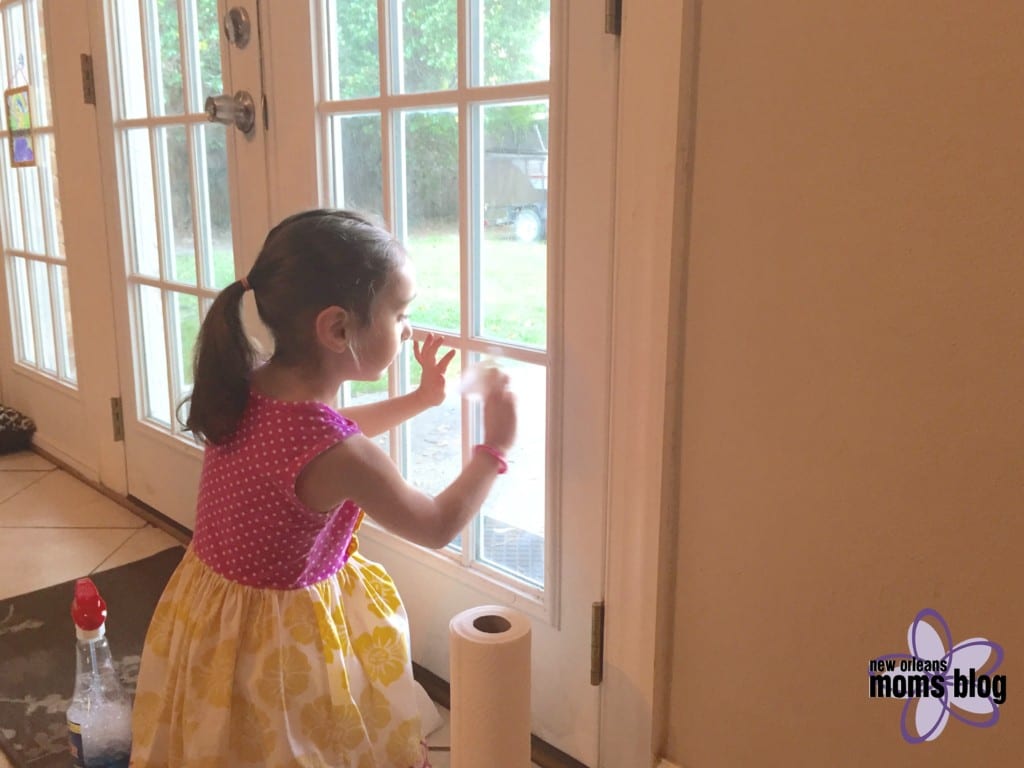 On that Saturday afternoon, she continued to talk to us through her closed bedroom door for over an hour asking if she could come out of her room. I did my best to ignore it, thinking she would quit after a while, but no such luck. So my husband gave her two choices :: stay in her room and actually stay quiet OR get up and do some chores. She chose to get up and do chores. He handed her the Windex and a roll of paper towels and told her to clean the windows on the French doors. I was impressed; she really did a great job cleaning the inside and outside of the windows. When she was done with that, she picked up her little broom and started sweeping the floors.

It was then I realized she can do more.

She wants to do more.

For the last couple of years, she has “helped” around the house doing what we deemed as appropriate chores for her age, such as picking up her dishes after dinner, folding hand towels, and pressing the buttons on the dishwasher. All things that I was able to control how they were done, or that wouldn’t be too hard or time consuming to re-do the “right” way. Now that I think about it, there are so many more things she can be doing, not only to help around the house but to also learn good habits that will be useful throughout her life.

Maybe it’s time to give up some control and add some real chores to her list. She can do more.

All too often, I find myself rushing her along to speed up the process. Four out of five mornings during the week (read: every morning), “put your socks and shoes on” is repeated multiple times until it’s two minutes before we need to walk out the door so she isn’t late to school, and I end up sitting on the floor next to her to put them on for her. This has to stop. She is perfectly capable of doing it for herself. She can do more.

When we allow children to do things for themselves, even when the end result is not exactly how we would do it, it gives them the determination they need to learn how to succeed in life. So what if her bedspread is not completely straight or the pillows are not perfectly situated the way I would have done it? The pride she feels after doing it herself stays with her all day and gives her the confidence she needs to try other things for herself. Plus, as with anything in life, the more she practices, the better she will be. The same goes for me. The more I allow her to be independent, the better I will become at giving her the chance to do for herself.

Because she can do so much more.

One Less Trick or Treater {My Attempt to Balance Joy and...