Until now, I have seen my role as a mother as my child’s protector. I don’t hover over her, but she has inherited my clumsiness, so she has had her fair share of bumps and bruises. With that said, she has been protected from the great evils of the world.

Just the other day, as we walked through her school, where on one wall the beginnings of a mural had been sketched, I asked her what she would draw if she could make the mural. Her reply, “Ummm …  maybe butterflies, sparkling rainbows, ballerinas, a castle, a peacock with proud feathers, and my family.” That has been her world. It is a fanciful place filled with lovely, happy, beautiful things – both real and imaginary. 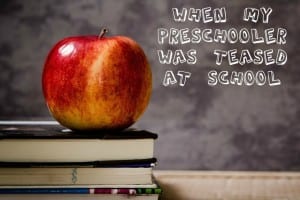 I don’t remember the first time I was teased. I can’t quite recall if or when I was made fun of. I’m not sure when it was that I realized I was not a cool kid. My existence in lower school was somewhere on the periphery of the popular crowd. I was in enough to sit at their lunch table but not so in that my seat was secure. As would happen in fifth grade, the rulers of the cafeteria would move you closer to the head of the table depending on where you ranked that day in their pecking order. How I longed to sit at the seat to the right hand of the head mistress of the lunch table. How I desired to be invited to the extra exclusive part of the birthday parties – the sleepover that happened when all of the regular guests left. On occasion, I was, but what goes with the territory of being just outside of the inner circle is the pain caused when you are not included.

Last Thursday, as I put my daughter’s lunch box (proudly packed by her dad) in her bag, she whispered something to me so that he couldn’t hear her request? Initially, I couldn’t hear her and was frustrated that she was mumbling when we were in such a rush. I took a deep breath and asked her to repeat herself loud enough for me to hear. She looked around to make sure my husband was no longer in the room, and in the speech of an almost four year old said, “Mommy, make sure Daddy doesn’t put one of those fyoot (fruit) pouches in my yunch box. I don’t want my fyiends to call me a baby all day.”

I must have misunderstood. She’s not even four. Certainly, she was not being teased about her lunch already. But the look of concern and anxiety on her face confirmed that she had been, and my heart broke into a million pieces. For the first time, she verbally expressed feeling embarrassed. And I could not shelter her from this. I could not protect her from the pain she felt or will feel as the result of other’s words.

For the first time in years, I allowed myself to revisit the feelings of angst and humiliation and loneliness I felt in middle school. And while all of those feelings swirled around my adolescent brain, I had incredible self worth. I never allowed them to cloud who I was or what I believed in. I didn’t allow my want to be accepted as a part of this inner circle to affect how I treated those outside of it. And I never allowed it to stop myself from believing that I was valuable. My self-confidence was unwavering.

I wish I knew how that was possible. I wish I knew how to pass that on to my child. I wish I could explain how proud I was to have a child who was more worried about her daddy’s feelings getting hurt than her own. I wish that I could have convinced her that it is OK to like something that other people don’t understand. I wish she could go about her day not worrying about being teased over something as meaningless as pureed fruit.

Most of all I wish that I could protect her. I suppose my role as a mother is evolving. I can no longer keep her safe from the things that will hurt her, but I can ensure that those things do not define her.

Growing our Family: The Gift of a Sibling

Working Mom Diaries: The Complex Emotions of My First Day Back...