How Going Gluten Free Saved My Family (Part 1 of 3)

My daughter has been screeching hysterically in the back seat for almost 40 minutes, refusing or unable to tell me what’s wrong. She’s in full-on meltdown mode, fighting against her car seat for a few minutes, then hyperventilating to catch her breath. I keep driving, whistling softly to myself to maintain my calm. I feel guilty for not stopping the car and helping her, but these anxiety attacks are happening two or three times per day now. If I stopped life each time, we’d never get anywhere at all. And during her episodes, she’s inconsolable. Everything I try makes it worse, so I may as well drive us home.

We’re almost there and the screaming has me feeling edgy when I hear a THUMP and something falls in the back seat. Then, before I understand, I get pegged HARD in the head with her other shoe, which falls into the passenger seat beside me. After a moment of shock, my rage erupts and I alternate between yelling ferociously at my anxiety-riddled babe and fuming in silence.

For us, this was normal. 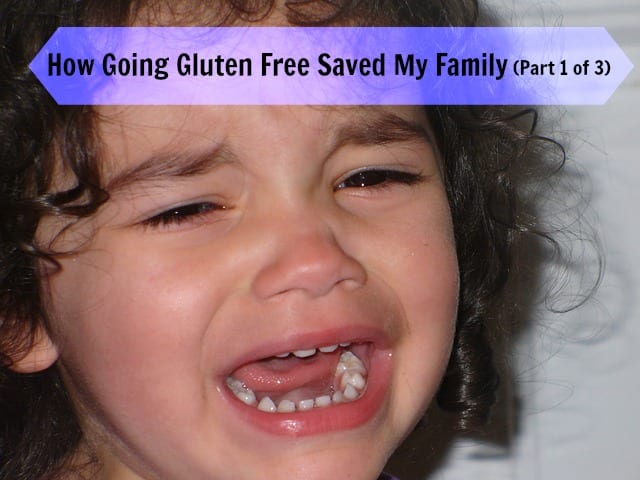 Hours and days like this have been our norm since my daughter was born, almost four years ago. She was a miserable, irritable baby who cried inconsolably for hours each day. She had problems with eating and sleeping and bathing and dressing and just about everything, it seemed. Seriously, it’s been hard.Except for my husband, the people around me mostly ignored it or thought it seemed normal-ish. Whatever they thought, no one said anything like, “hey, your kid’s a crazy pants and you might want to check into that” until she started pulling nudity strikes, crawling under the table at meal time and scream-crying for over an hour, hitting me multiple times daily, throwing her food against the wall, and throwing her clothes into the road during an epic, public, naked anxiety attack that I hope none of you dear readers witnessed.

For my part, I certainly suspected something wasn’t right, but no one else seemed very concerned. Her doctor said she’s smart and “spirited.” She did fine at preschool and with sitters. Maybe she and I just didn’t get along? Maybe I’m the world’s worst mother and this is all my fault? Or maybe this is how all kids are and I’m making a mountain out of a meltdown?

After the shoe throwing fit, I phoned a friend. And as she listened to my acrid, scathing complaints about my holy terror of a child, she gave me some solid advice. It was the kind of advice only an experienced mother has and only a true friend will bother giving. “Shelly, for the love of god, stop being so stubborn and take her off gluten. Just try it.”

Gluten? You think my kid is a miserable bundle of raw nerve endings because she eats wheat protein?

There isn’t a wealth of research on non-celiac gluten sensitivity, and what we do have contradicts itself. Some research does point to its existence, but there is little-to-no support in the scientific community for the idea that a gluten free diet can help children with emotional or behavioral issues feel and act better. And so, I thought, the gluten thing is bunk. Woo. Pseudoscience. Fad. A marketing scheme to help the affluent pay $9 for a tiny box of tiny crackers that taste like butt.

It took a few more hopeless episodes to convince me to go for it, but I finally tried it. What’s the harm, right? At this point, I was ready for prescriptions or boarding preschool or both, so we may as well try food first. I read a few other parents’ stories for courage, then bought a load of gluten free substitutes for the gluten-containing food we normally eat: bread, pasta, english muffins, even a gluten free frozen pizza.

Letting the Results Speak For Themselves

Since we started, I’ve been keeping a daily log to track any changes in my daughter’s behavior or mood.

Days 1-3 were “normal.” Crying, yelling, throwing things. She hit me several times each day.
On Day 4 of this gluten free experiment, we had a morning with no tantrums, which hadn’t happened in over a month. Such a relief, but certainly coincidence.
On Day 8, we went a full 24 hours without any tantrum at all. My husband says this has happened before. I believe him, but can’t remember it.
Day 9, again, no tantrums. Holy diet fad! Is this working?
Day 10, one fit that lasted just 5 minutes. Meh, my old kid would eat this measly fit for breakfast.
Day 11, one tantrum, under 5 minutes, when she was hungry. Doesn’t even count.
Day 12, no tantrums.
Day 13, no tantrums.
Day 14, no tantrums!

We’re now on Day 24 of the gluten free experiment and I barely recognize my daughter. Her meltdowns are now coming once every few days (down from 2-3 per day) and with more predictable triggers. They last just a few minutes instead of escalating for 30, 60, or 90 minutes. She can be reasoned with. And, maybe best of all, she can be comforted! I can help soothe her into relaxation without waiting for the entire anxiety process to work itself out.

It’s hard to believe something as common and seemingly benign as wheat could be so devastating for her. But, she’s basically had a personality transplant these last three weeks. Without the crippling anxiety and hours of distress each day, she seems smarter, funnier, more curious. There’s more time for play and less cause for yelling. She’s sleeping better. We’re sleeping better.

I can’t overstate how different our lives have been this month. We’re laughing a lot, enjoying our time together. We’re grateful for each good day, and also starting to trust that this might continue. My plan is to keep her off gluten for at least a full month, then reintroduce gluten for a month, then take her off it again. I’ll keep tracking and hopefully this test will minimize the possibility of coincidence.

I’ll let you know what happens as we keep exploring our new, calmer, gluten free world.

Did you take gluten out of your or your child’s diet and see big changes? If you have experience with gluten free eating, I would love to talk with you down in the comments.

**A Quick Note: I want to shout this from the rooftops. I want to tell every parent I know, just in case their kid could benefit from it too. But I also want people to be careful and realistic. If you want to try eliminating gluten from your child’s diet, be sure they’re still getting the nutrients they need. Wheat products are heavily fortified with vitamins and minerals, which will get tossed out with the gluten. Also, gluten free substitute foods (made from rice, corn, potato, tapioca, etc.) are often significantly higher in fat, salt, and sugar, so they aren’t a healthy long term solution. It’s best to work with a pediatrician or a nutritionist to make sure the gluten free diet is meeting your child’s nutritional needs.

5 Reasons to Choose A Midwife (and 1 Reason Not To)