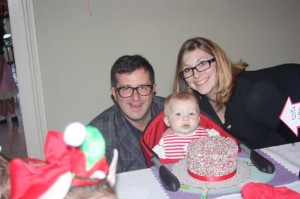 I don’t quite remember when it was, but not long after Jane was born, I started a series of Pinterest boards with ideas for first birthday party themes. It felt a bit like planning a wedding; her first birthday seemed so far away that it felt like it would never actually come. But, sure enough, time passed (all too quickly) and we were soon choosing between Visions of Sugarplums and a Winter One-derland. We chose the latter for its clever play on words, and because it evoked a playfulness about Christmas that felt fun and childlike just as a first birthday party should.

With the theme chosen, the planning commenced. I started with the 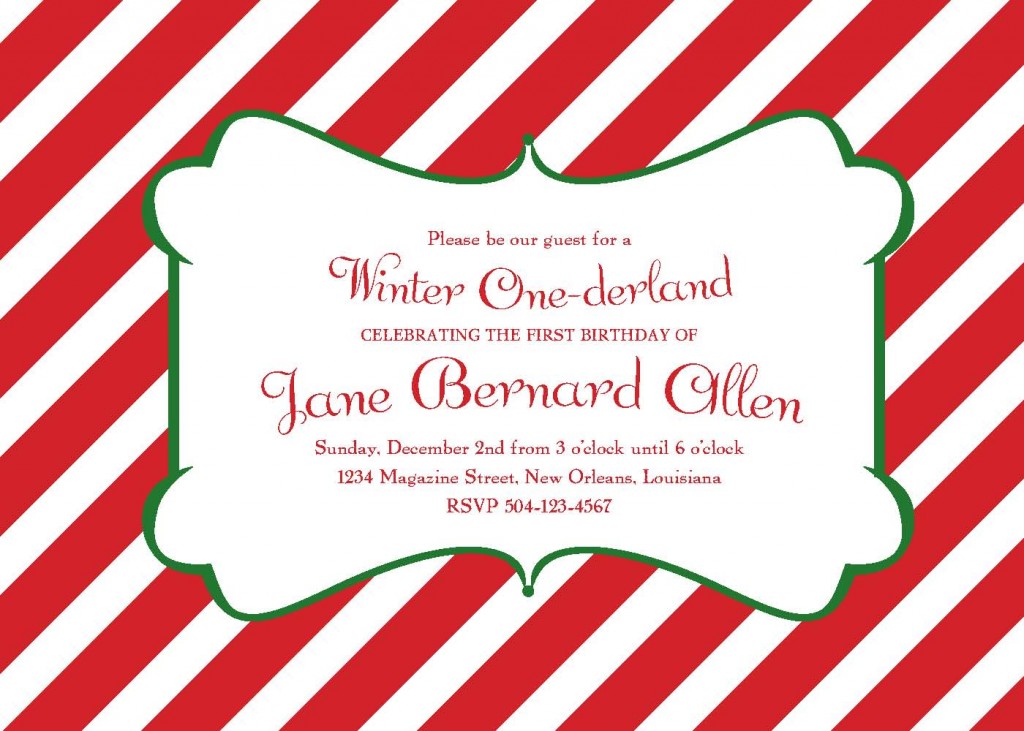 invitations from Lauren Alsop Custom Papers.  Lauren has been my right hand stationery woman for the last year. I wish I could have one ounce of her passion and creativity! For this project, Lauren hopped onto my pinterest board and found her inspiration from there. She designed an invitation that was a perfect peppermint concoction almost sweet enough to eat!

The party was at a rather untraditional time (from 3:00 – 6:00pm on a Sunday) to ensure that Stephanie’s uncle could attend. That allowed us to skip the lunch menu and head straight for the desserts. I absolutely love a dessert display, and what better time of year to sample sweets than at Christmas? I used our main dining table as a buffet with a spread that included snow capped oreos, pretzel icicles, Santa’s favorite Saltine toffee, and Mrs. Clause’s cake balls (Courtesy of Stephanie’s Cakeballs).

The main buffet was also accented party fun for everyone. We had a bowl filled with festive headbands and dingle-hoppers and LED Christmas light necklaces all found at Walgreens. We also had vases stuffed to the brim with clever Christmas photo props courtesy of Melissa from Let’s Party Nola. The kids – and the adults – enjoyed getting their pictures 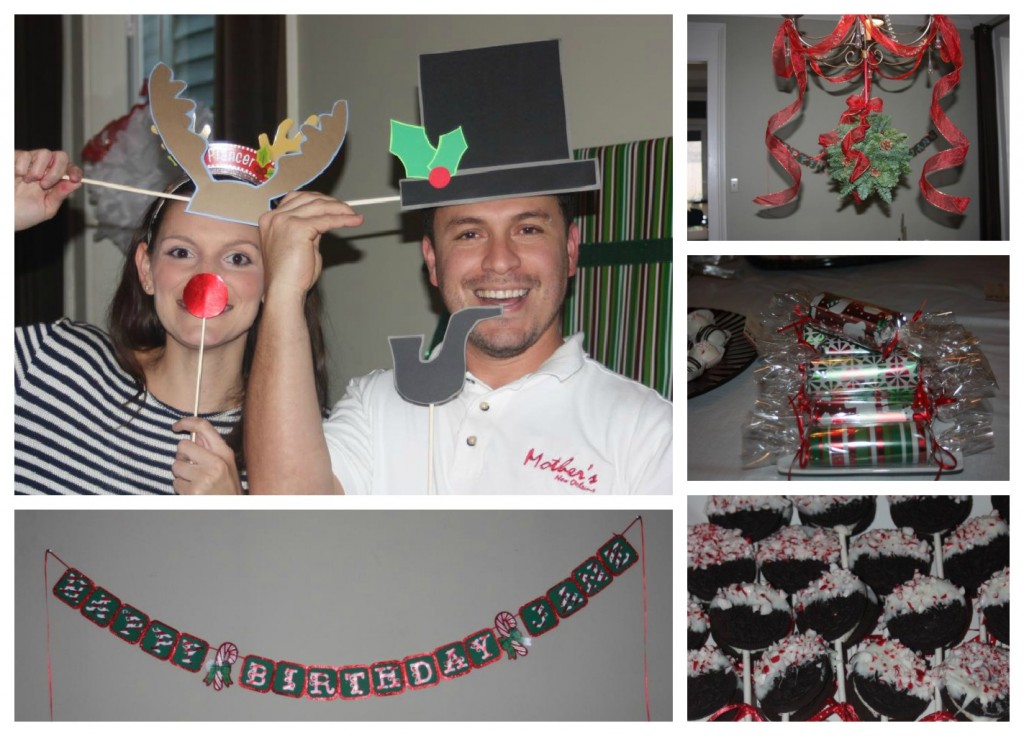 taken as Rudolph or Santa. For a fun surprise, I stuffed toilet paper rolls with trinkets like peppermint pop rocks, mini cookie cutters, Santa baby socks and chocolate. I then wrapped them in wrapping paper and rolled them in cellophane. The result was a decoration that was as pretty as it was fun. I highly recommend this craft! It couldn’t have been easier, and the kids loved seeing what treasure was hidden under all of that wrapping! Centered above all of the festivities, were a Garden Gate kissing ball and draped red ribbon.

It wouldn’t be a Christmas party without hot chocolate! We set up a hot chocolate bar in front of a display of red paper fans (from Tom Kat Studios). Mixed in were paper peppermints wrapped in cellophane. Along side our hot cocoa, we served peppermint whipped cream, caramel sauce, chocolate dipped marshmallows, Baileys and Godiva liquor. Because it was a balmy 78 degrees outside that day, we also served our favorite eggnog daiquiris. We provided plastic milk bottles with special labels for the little ones paired with fun red and white striped straws.

Last, but not least, the birthday cake!!! From the minute I saw my first sprinkle cake, I just knew that was what I wanted for Jane’s smash cake. And, who better to make it than her pastry chef Aunt Sissy. Stephanie made the most 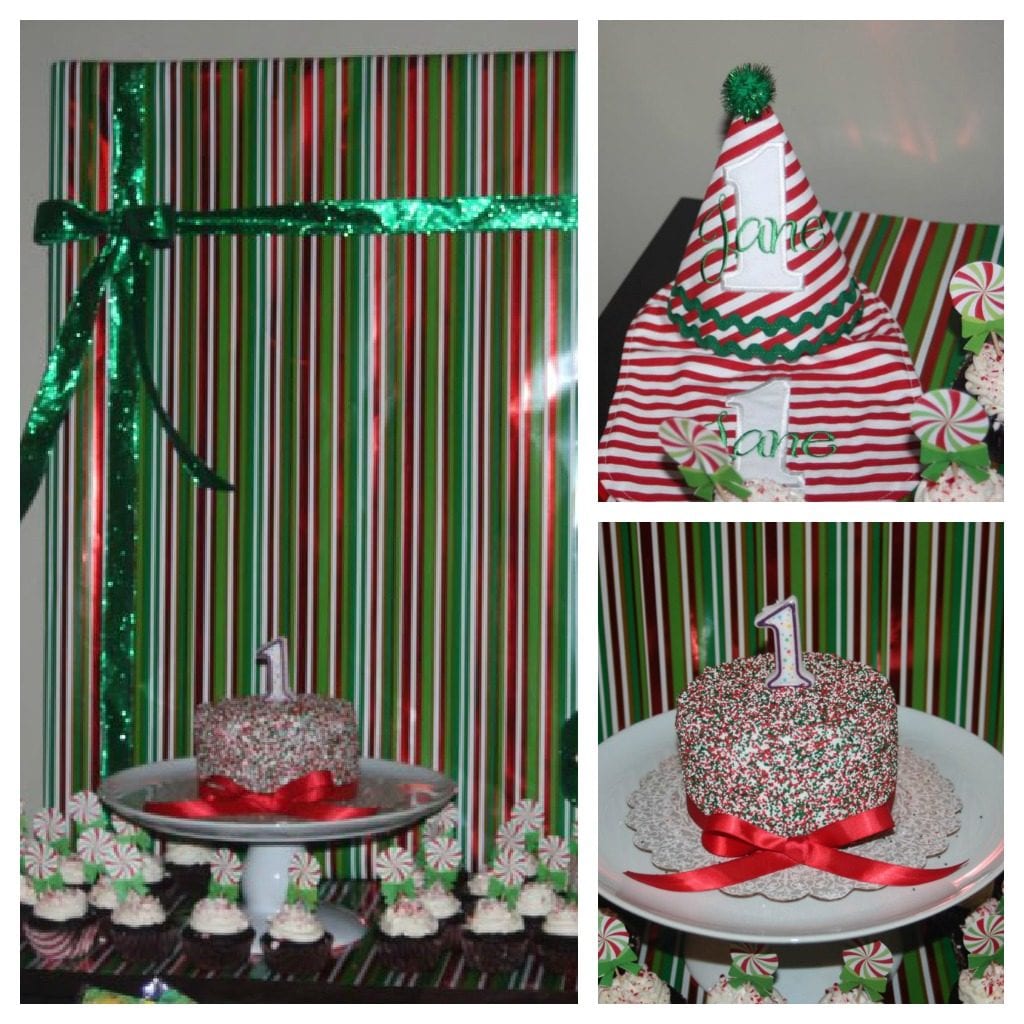 beautiful red, green and white sprinkle cake and matching chocolate cupcakes with peppermint buttercream. Aside Jane’s cake was a cranberry tree that I made out of floral foam and live berries. Also standing near her cake were the adorable birthday hat and smash cake bib made by Janet of Dainty Couture.  Janet was so sweet and amazing to work with. She designed Jane’s hat and bib just for her! Rather than the complexity of hanging a fabric covered board as the backdrop, I wrapped the mirror above our buffet like a present. I think it looks just as festive without all of that extra work!

I hope you enjoyed sneaking a peak into Jane’s first birthday party. I’d say I’m looking forward to a crafting and creativity break, but it’s time to start pulling out the glitter and decorating Muses shoes.  Before you know it, I’ll be prepping for party number two.  Hmmm …  I’m thinking I could see Two Turtle Doves …  A bird theme?!?!  Oh no, just when I thought my Pinterest account would get some rest…

Eating Your Way Through Jazz Fest: My Top Picks for Parents...

How to Catch a Muses Shoe (And Other Elusive Carnival Throws)