When Bennett was three, he was terrified of haircuts. No amount of bribery, restraint, or pleading could convince him that allowing anyone to be near his face with a sharp object was a good idea.

My husband has been shaving his head for St. Baldrick’s since 2008. People raise money for pediatric cancer research by promising to shave their heads, which also serves as an act of solidarity for the kids who have no hair as a result of the treatments. He loves raising money for a good cause, his students think it’s cool of him to do, and it gets him the perfect maintenance free summer haircut. Bennett has watched him shave his head on stage every year of his life. 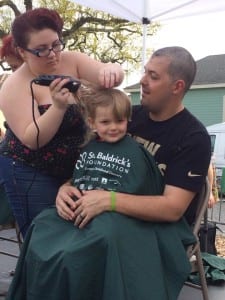 In 2014, when the twins were only a month old, we packed everyone up on shave day and headed to Finn McCools. We watched my husband get his head shaved like we always do, but then Bennett said that he wanted to shave his head like his dad and help kids, too. My husband looked at me the way he does when he thinks we have a very small window of opportunity and asked me if I was ok with it. “It’s only hair,” I thought and gave them my blessing. They hurried to sign Bennett up to be shaved, and people started asking questions. Are you really ok with this? What if his hair comes back a different color? Obviously, they had never clutched him while he screamed and flailed through a haircut with a sticky lollipop bribe hitting them in the face.

Their turn came, and he sat in my husband’s lap. He sat still and beamed the entire time. He ate up the attention from the Emcee and the attendees who told him he was their hero.  Even at three, he knew he was doing a good thing and that made him proud. As parents, it made us pretty proud, too. 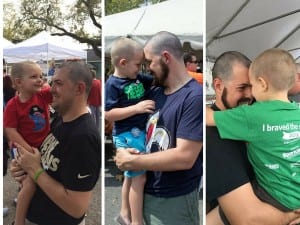 This was his third year to participate. When he and his dad sit up on that stage together and hold hands, the crowd goes wild, and my heart turns into a big sloppy puddle. The days that I am so frustrated with his behavior, when I feel like I’m failing as a parent, I remember that moment. It reminds me that I’m doing something right because I’ve taught him (intentionally or accidentally, I’m not entirely sure) to be kind and giving to others, even if it means doing something that scares him. I love that this is something he and his dad share and choose to do together, hopefully for man years to come. 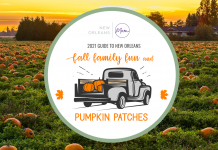 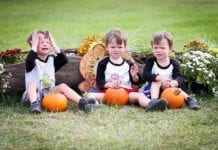 Our Motherhood Problem: A Letter to My Girls

Dear Husband, I See You