I’m so sorry. My stomach turns and my head pounds when I think about when I was in your shoes. It was just about 19 years ago.

I was 16 when my older brother Ryan was killed in a car accident. He was 20. Of seven children, he is number six, and I am number seven. We were four years apart. We had a hilarious and at times ridiculous relationship that was filled with practical jokes, extreme roughhousing, and doing whatever we could to get the other in trouble.

He was always getting into something, and I was like a puppy right behind him. If he was fist fighting some neighborhood kid, then he was training me to fistfight. If he was digging around for lizards and bugs, I was right there next to him. He even put me through “boot camp” when I was about 8, determined to toughen me up and away from the little girl who was always in a dress. 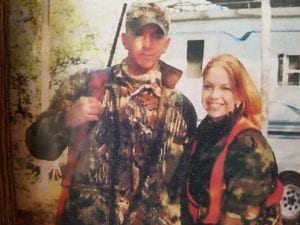 He probably had no idea just how much influence he had on me.

And even though I threatened to kill him on a regular basis, I had no clue how much my heart would shatter once he was really gone.

I don’t know what it feels like to lose a child. God, I’m so thankful for that.

But I do know every inch of life after losing my brother. 19 years later and it’s still harder than my worst nightmare.

I was a junior in high school.

My brother, the scrappy, handsome, charming and witty, six-foot-something, trouble making blonde headed beach boy, had been killed in the middle of the night in a car accident.

My house was saturated with grief.

I wanted out. I begged my mom to let me go to school the next day. I had to get away from it all. The crying, the apologies from strangers. The phone calls. As a 16-year-old, all I could think of was “Get me out of here.”

I walked into school the next day, and I was immediately overwhelmed with regret. Why? Because I went from being the bubbly, happy, junior to The Girl Whose Brother Died. Literally overnight.

It felt like everyone thought it was contagious. As if being close to me would somehow make them lose someone close to them too.

Welcome to the Club You Never Wanted to be in.

You can only be in this club if you’ve lost someone really close to you.

We know the gut-wrenching feeling of wishing you could go back in time and fix it. Change it. Do something, anything, different. Something that would have somehow changed the course that life took on the day we lost them. Anything that would mean they were still here.

The Stages of Grief are Real.

And I crawled through them.

I was angry as hell. I wanted to fight someone. I wanted someone to start a fight with me. I could take my anger out on them and on some level that would make me feel better.

It wasn’t healthy. My parents took note and within a week I was in therapy.

But, if not for God.

Up until that point, I had never gripped my faith so tightly. I didn’t speak to God right away. But once I did, I gave it all to Him. And my faith is that I know that even though my brother was a bit of a wild one, God made him, and he was in heaven, forever in God’s own arms. Fishing and hunting, and making everyone laugh.

I don’t know what I would have done, had it not been for my faith. In it, I found the comfort I was so desperately looking for. I knew one day, despite my grief, I would find happiness in life again.

The truth is that the statement “shouldn’t I…?” has no place in grief. You shouldn’t be doing anything, except allowing yourself to heal at your own pace.

This is Your New Normal.

You will never get over the death of your sibling. But, after some time, you’ll… adjust.

As if one day someone hit you in the head with a sledgehammer, and then every single morning that followed, as soon as you opened your eyes, they hit you again, at some point you would adjust. You’d come to expect it.

Some days, you might wake up and for a half a second forget you were about to get hit with that same sledgehammer. But then? You remember. And you get hit again.

Other days it might feel like the blow doesn’t hurt quite as bad. And then still others feel as though you’d been hit for the first time.

The pain will be gut-wrenching for a long time. It will fold you in half and you will weep deep soul-crushing tears.

For a while, memories of your childhood will be covered in a shadow of raw, deep, sadness. Vacations, holidays, birthdays. That sibling was likely in all of them. Maybe there were games or adventures in the back yard. There were probably contests of every degree. There is nothing more real than brutal competition between siblings.

One day it will feel good to tell those stories, even if you’ve told them 100 times before. It’s hard to swallow that there will be no new memories with them.

But no one can take those precious memories you do have.

And time might dull the sound of their laugh or the brightness of their eyes. But time cannot take away who you are because of them. Their personality, sense of humor, their taste in food and music and fun… all of the things that made them unique in your family, also made its way into who you are.

Please, sisters, please be gentle with yourselves. Do not expect anything of yourself. If you feel anger, or intense sadness, or just plain exhaustion, allow yourself to feel it. Rest your mind.

Grab any notebook, and write down every feeling that you can’t say out loud. Pour out your grief onto the paper, for only your eyes to see.

Time is the only thing that will ease your pain.

You may be in a never-ending thunderstorm now, but I promise, the sun will shine again.

It’s been 19 years since my big brother died. And as hard as it is to say since he’s been gone, life has gone on without him. He has missed every major life event I’ve ever had. He’s never met my amazing husband or my beautiful children.

Recently I’ve reached a new layer of grief. I struggle now with what should be. I should have another brother that I can call to hang out with or see at parties and holidays. He should be here, making us all double over laughing. So here I am, now mourning the adult life he never had, and the adult friendship that we never grew. Time will heal the new sting of his obvious absence.

But sister, you’ll never get over losing them.

If you’ve lost someone in your life, and are feeling hopeless or suicidal, PLEASE reach out for help! There are support groups and therapists that can help you!

Bloom, Mamas: Turn Your Hobby Into a Side Hustle