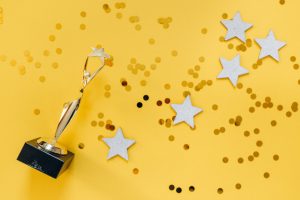 Oh my gosh! I am so deeply flattered and humbled to be nominated AGAIN for the World’s Meanest Mom award! I know I’ve been nominated quite a few times in a row now, but it’s still a surprise. You hope that it’s coming, and you might even feel like you know it’s coming, but it’s not really real until you get the call, you know?

I wonder which incident my kids submitted to get me officially nominated this time around. They have so many good ones to pick from, but I know they’ve got to pick just the right one to really impress the judges. Was it the time I wouldn’t let my two-year-old wear his sandals to school because they have a strict socks-and-shoes policy, but I did let my five-year-old wear two different shoes because, technically, both were tennis shoes? There was a lot of injustice there, but probably not mean enough to win me any awards.

Perhaps it was when I told my two older boys that they couldn’t ride their eight-month-old brother like a horse. That was pretty mean. Maybe it was because I told my oldest son he couldn’t drink from the blue cup… because it was in the dishwasher. Could it be because I insist they brush their teeth twice a day? That’s a classic Mean Mom move and not terribly original, but because I pull that move every single day, perhaps the sheer quantity makes up for the unoriginality.

They’ve got lots of great examples of me trying to make sure their snacks like goldfish or grapes are exactly equal, but when we count it out, one of them has more than the other and I don’t rectify it quickly enough. Or the time when it looked like one of them had more water in his cup than the other. We barely recovered from that.

Oh, I’ve got it! It has to be the time that we pulled into our driveway and I dared to roll the two-year-old’s window up before turning off the car. That fall-out was EPIC. Even worse, when he escaped my evil clutches and tried to run down the street away from me in protest, I ran after him and caught him. And my meanness knows no bounds. I even tried to get him to do some deep, calming breathing exercises with me to try and quell the meltdown. I’m downright diabolical.

That’s for sure what they used to nominate me.

I’m the World’s Meanest Mom!! Again! Truly, what an honor.

What’s great about this award is that the selection committee hands out a new one every single day, multiple times a day, so we can all be the World’s Meanest Moms together. Who needs a “World’s Best Mom” coffee mug when we can clink our “World’s Meanest Mom” mugs together in celebration? I’ve got an entire cabinet full now.

And the best news is, as my kids get older, I’m sure my sins against them will get even worse, and I’ll get even meaner. If they think me making them take baths is mean now, they have no idea what’s coming. I’m going to need a new shelf for all my awards.

Congratulations to all my fellow Mean Mom winners! Please share your own kids’ nominations for your award! I can’t wait to see if I win again tomorrow.

Worth the Drive from New Orleans :: Mississippi Aquarium