As a little girl, I thought that my kids would follow in my exact footsteps of playing sports all year long at the local playground. I wanted them to play every sport available and love every second of it. Little did I know they would have their own thoughts, wants and skills; they would not be carbon copies of me.

From a young age, my strong-willed, resilient son, Finn, loved music. I knew that at some 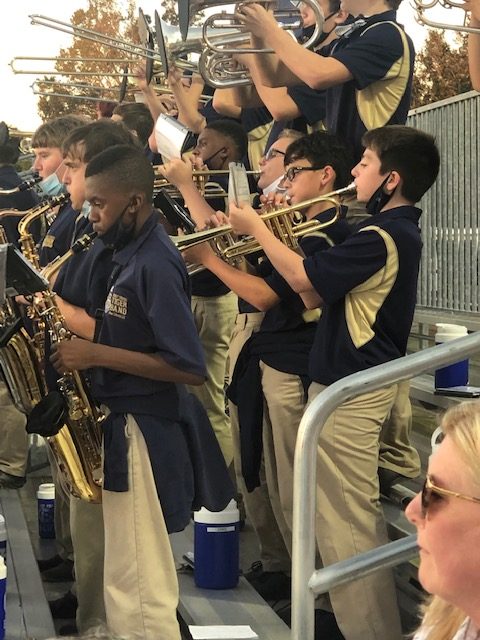 point music would make his life better, but I had no idea what was in store for my sweet son.

His primary school had a wonderful music teacher that piqued his interest about playing in a band. She opened her students’ eyes regarding music and the endless possibilities it includes. The parents love her so much for it. Ms. S as the children lovingly call her encourages anyone and everyone to participate in the band. If three children want to play guitar, she makes a place for them and teaches them the basics of playing together. This early experience showed Finn that playing a guitar can lead to countless possibilities including the feeling of belonging to his school. Playing guitar in the band helped him with his confidence, his ability to play together with his bandmates to a conductor of one and to have a significant role at school that was not sports related.

As Finn transitioned from primary school to middle school, he discovered that he was now the small fish in a big pond. His first year, he struggled to find his place at school, to find his tribe. He has never been a child to have a best friend. His friends are neighborhood kids and children of my friends. These friends are great but did not help him while he was at school. The next year, sixth grade, he signed up to take band as an elective, but guitar was not an option, so he had to pick another instrument. Thankfully, his aunt and uncle had a trumpet that he could borrow to get him started. He picked up that trumpet and blew us away. He was asked to be part of the Honor Band and at the end of the school year was asked to be a member of the Holy Cross Tiger Marching Band, one of three sixth graders invited. Finn was elated and I had a feeling that this band would be his “place” and would contain his TRIBE. Band Camp was not held until the following summer. Understandably, he was still a little unsure. Would he fit in? Would he like it? Would it be hard? It was all these things, but it was also so much more. He felt the belonging, he loves performing and most of all he found happiness at school.

Last weekend was confirmation that he was meant to be in the marching band. During a Friday night game, the drumline started, and the rest of the band began to take their places in the bleachers. As Finn entered the bleachers, he was carrying a big, decorated 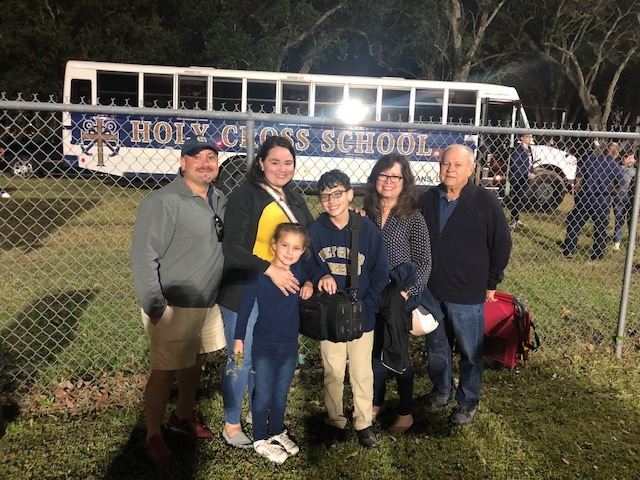 mall instead of his trumpet. I began mouthing to him, “Where’s your trumpet? Put that thing down!”  I had no idea what it was, but I would find out after the game.

While waiting for him to exit the stadium the other students called his name. My parents, my husband and I were unsure of what was going on. They called him to the front of the line to lead the band to the buses. Still uncertain about what was transpiring, I took some pictures and followed the band with a genuine sense of anticipation. Lucky for us, Finn seemed to take forever to get his belongings together that night, which gave one of his band directors the opportunity to come over and tell me what the decorated mall meant. The Band Director proceeded to tell us that Finn was nominated by his fellow bandsmen as “Bandsman of the Week.” The “Bandsman of the Week” is a special honor and the recipient gets to carry the decorated mall into the game. Beaming with pride I responded, “Really, I am so happy for him.” Inside I was a whirlwind of emotions both crying and jumping for joy all at the same time. 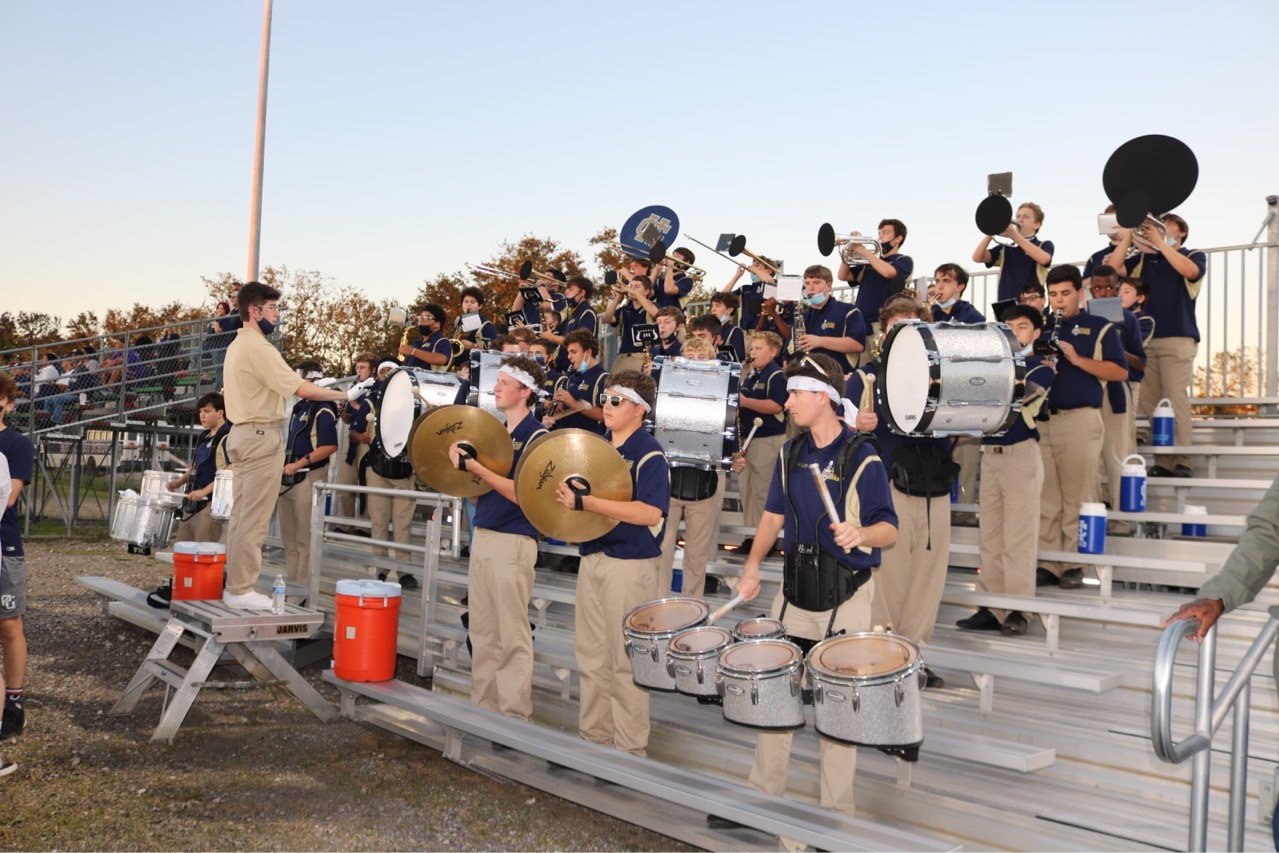 You see, his fellow bandsmen have no idea how much that nomination meant to me. It was twelve years of having the non-follower child, having the child that stands up for everyone, having the child that does not let anyone get anything over on him, having the child that would not take no or yes for an answer. It was vindication of all the hard work that we put in to make him a good well-rounded person. His personality and love of music shined through, and others could see the magic we have seen for years. For that night – and hopefully for the rest of his band career – he will feel like he is a meaningful part of something. I would in no way give up any of those qualities mentioned but it is nice that Finn found his tribe and is part of a brotherhood.

If your child is like mine or is completely different, give him or her a chance to try an instrument, it may just change a part of their lives and yours.

Kathy is a Metairie native who now lives in River Ridge with her husband Mike, her two 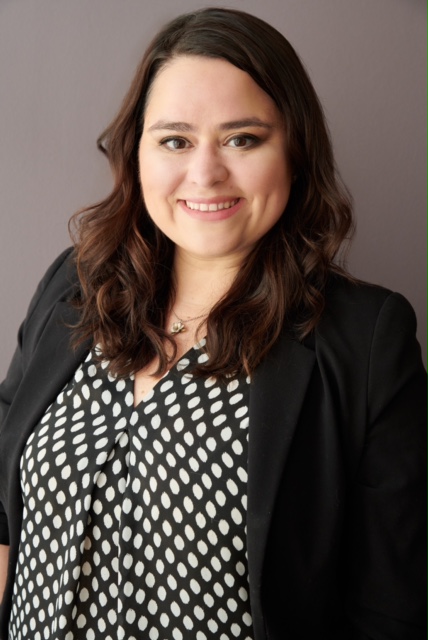 children, Finn, and Nina, and her 3 pups and a cat, Rex, Beau, Hans & Toula. You can find her double dating with friends Friday or Saturday nights at her favorite spot, Rock n Sake and brunching with girlfriends on Sundays. She makes sure that although her children are her world, her world does not revolve around them.  An avid traveler, you can find her in her parents’ homeland, Belize, spending time with family, snorkeling with sharks, riding golf carts around town, and eating the best food in the world.