When it was announced that Mardi Gras 2022 would happen, I almost didn’t believe it, and I didn’t dare mention it to my kids for fear of disappointing them in case it got canceled. But when the first parade of the season rolled, I brought it up casually: “Are you guys ready to go to Mardi Gras parades?”

My almost five year old responded with an enthusiastic YES, but my two and a half year old just stared at me and said, “What’s a Mardi Gras?” 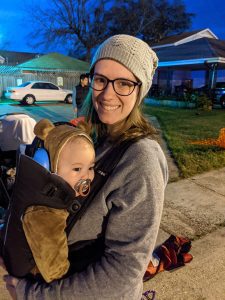 How could I explain it to him?

But I think there would also be so many beautiful differences– beyond the things we all know and love, we would all have some unique answers on what Mardi Gras is to us.

For me, it’s my nephew in his dinosaur costume, entertaining kids in the street.

It’s the smorgasbord of food that we all graze on during the day, but specifically the Manchu fried chicken my family eats.

It’s making sure we catch at least one spear– an old joke my husband started– to “win” Mardi Gras for the season, and shamelessly using our kids to get that darn spear.

It’s the frantic catch-all that our trunk becomes during the whole season, where I just throw anything and everything I think we might possibly need for the parade route. Light jacket, heavy coat, extra chairs, footballs, frisbees, water bottles, extra bags for beads, change of shoes, tissue packets, snacks on snacks… JUST IN CASE.

It’s the absolute magic of the garbage trucks and street sweepers that I never knew existed before I had kids– what my son would arguably consider the best part of the parade– and knowing we cannot and will not leave until the very last bead has been swept up and their flashing lights have finally faded from our view.

And there is so much more. There are so many more little details that make Mardi Gras… a Mardi Gras. And he may not remember now, but he’ll learn.

So tell me… what makes a Mardi Gras, specifically, for you?