We are pleased to introduce our community to newest members of the New Orleans Moms Blog team. Each one is a powerful, energetic and inspiring New Orleans mom, and we can’t wait for you all to get to know them both online and in person at any of our upcoming events. We are honored to have these women join our growing team. 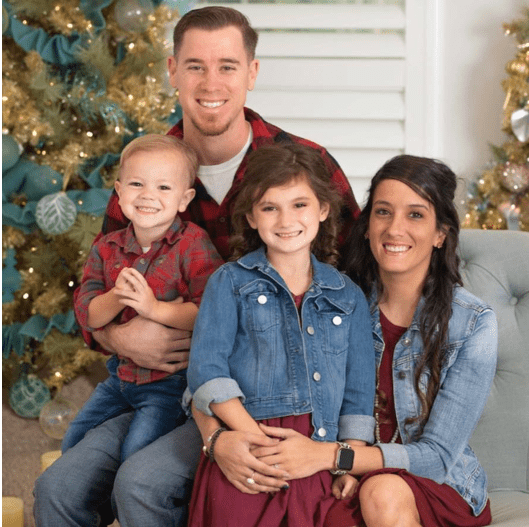 Her favorite snowball flavor:: Lemon ice or Joker from Sal’s

She believes the best King Cakes are found:: Randazzo’s or Dong Phong

During Mardi Gras, You’ll find her:: Trying to march with the bands (but always getting told something by the chaperones) or on top of the ladder… yes, like ACTUALLY sitting in the ladder seat.

During the Saints games, You’ll find her:: At a friends game day party or home watching the game.

Kids at Jazz Fest? I salute the parents who bring their kids out there but that’s way too large of a crowd for my kids to be trusted to stay close in.

Raising kids in New Orleans is:: Kind of like having a mullet…. there’s a time for work, school, and seriousness, but don’t worry… there’s always a reason to party. 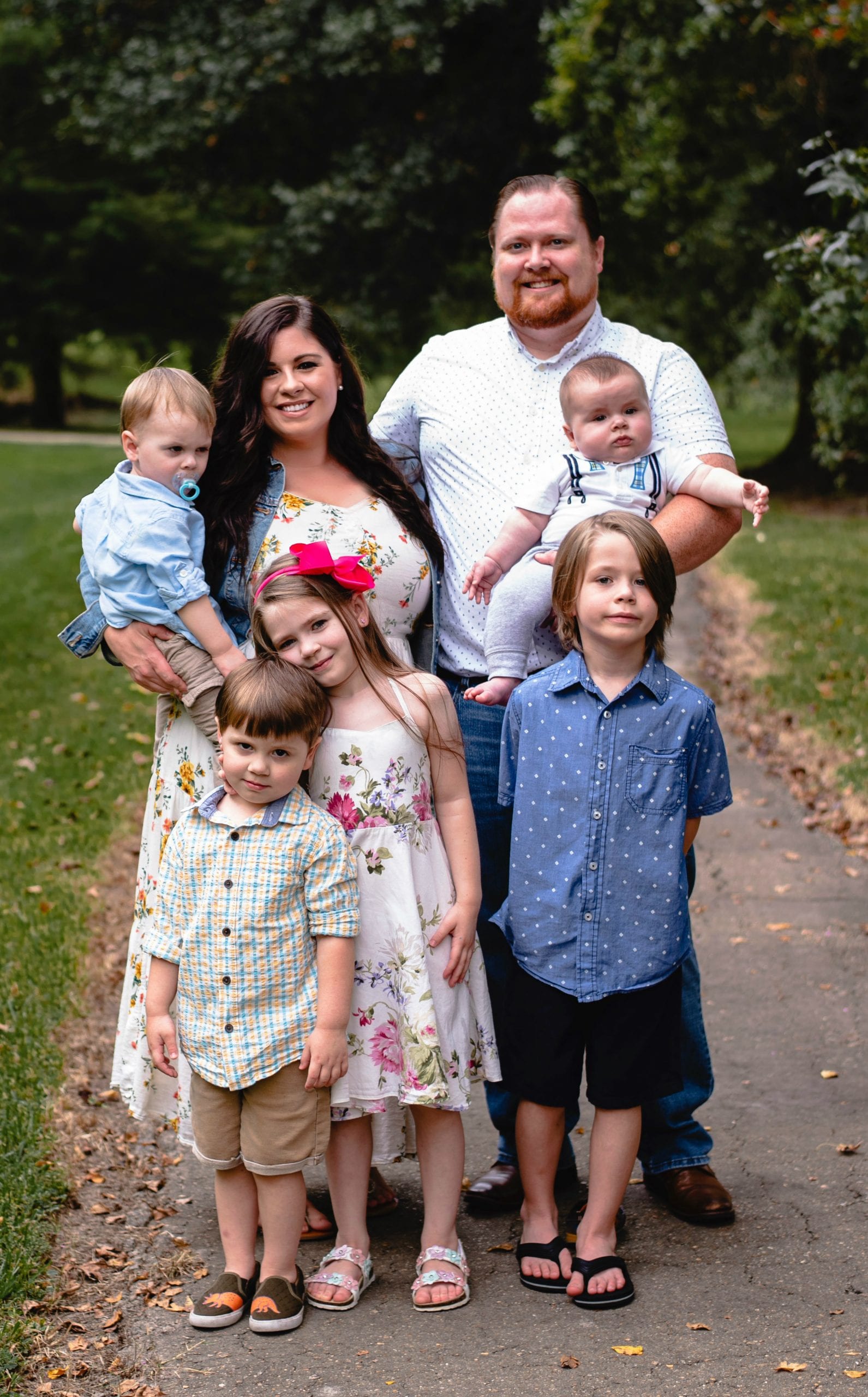 Her last NOLA meal would be :: Crawfish Ravioli from Copeland’s

She believes the best king cakes are found :: Randazzo’s

During Mardi Gras, you’ll find her :: Most likely heading to Lafayette to meet up with friends and family. My husband and I just moved our family back to LA from the East Coast and this will be our first official Mardi Gras with the kids.

During Saints games, you’ll find her :: Yelling at the TV, criticizing the refs, and singing the Who Dat chant and Choppa Style.

Kids at Jazz Fest? Haven’t been, but plan on waiting until they are a bit older.

Raising Kids in New Orleans is :: adventurous! With so much culture and history, there’s never a dull moment. 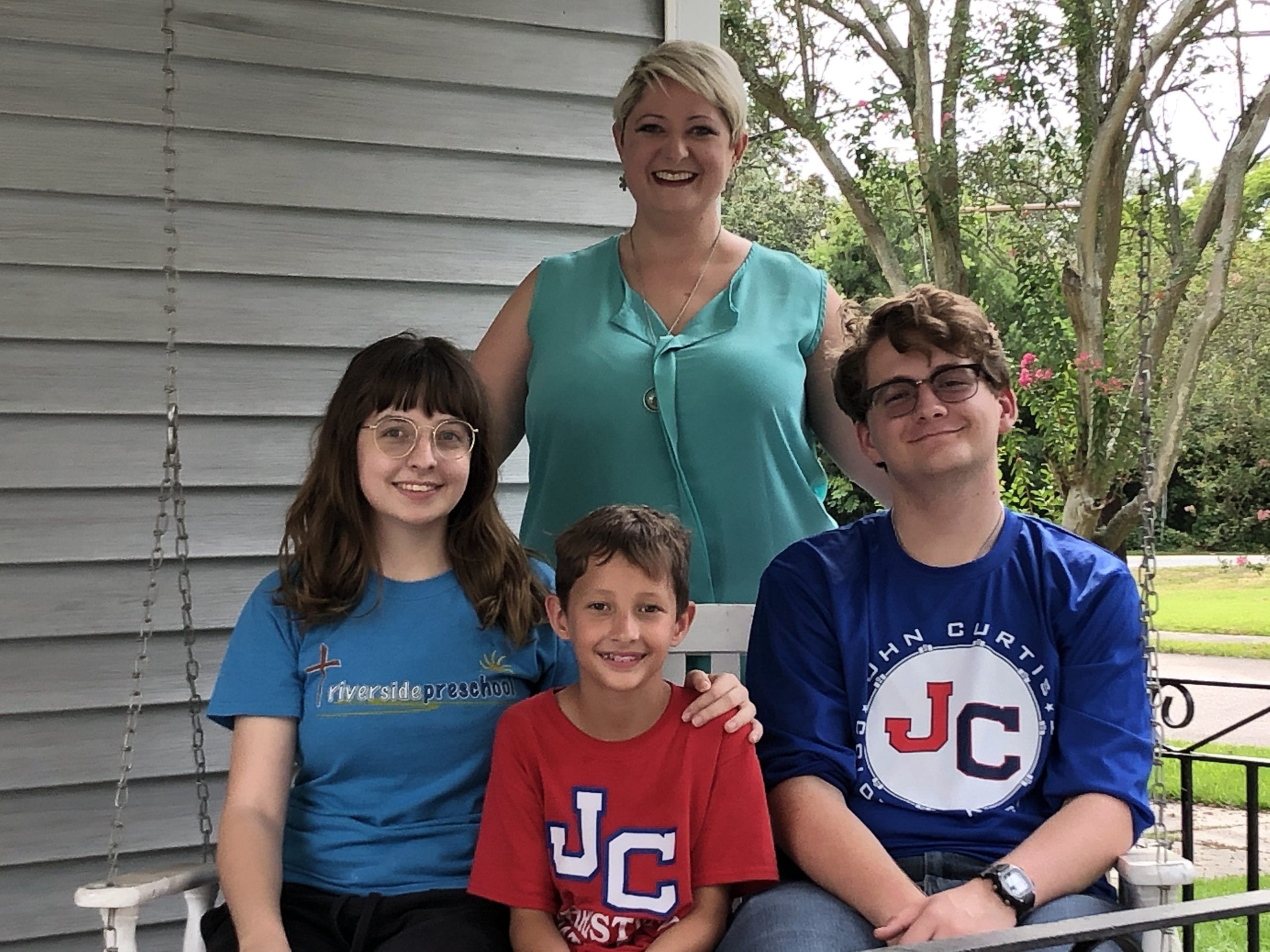 My last meal in New Orleans: A Muffaletta from Koz’s

During Mardi Gras, you’ll find me: Somewhere on St. Charles, with friends, a spiked coffee when it’s cold and something else delicious when it’s warm, except on Fat Tuesday, which I reserve as a quiet day hiding out at home with the kids and watching the festivities on TV.

During Saints games you’ll find me: Making chili, cheering, and enjoying my little boy’s love of the game.

Kids at Jazz Fest?: Yep! Soon as they can drive themselves.

Raising Kids in New Orleans is like:  having a playground in your backyard except instead of benches for the parents to sit and watch, there is just more play equipment so you can have fun too! 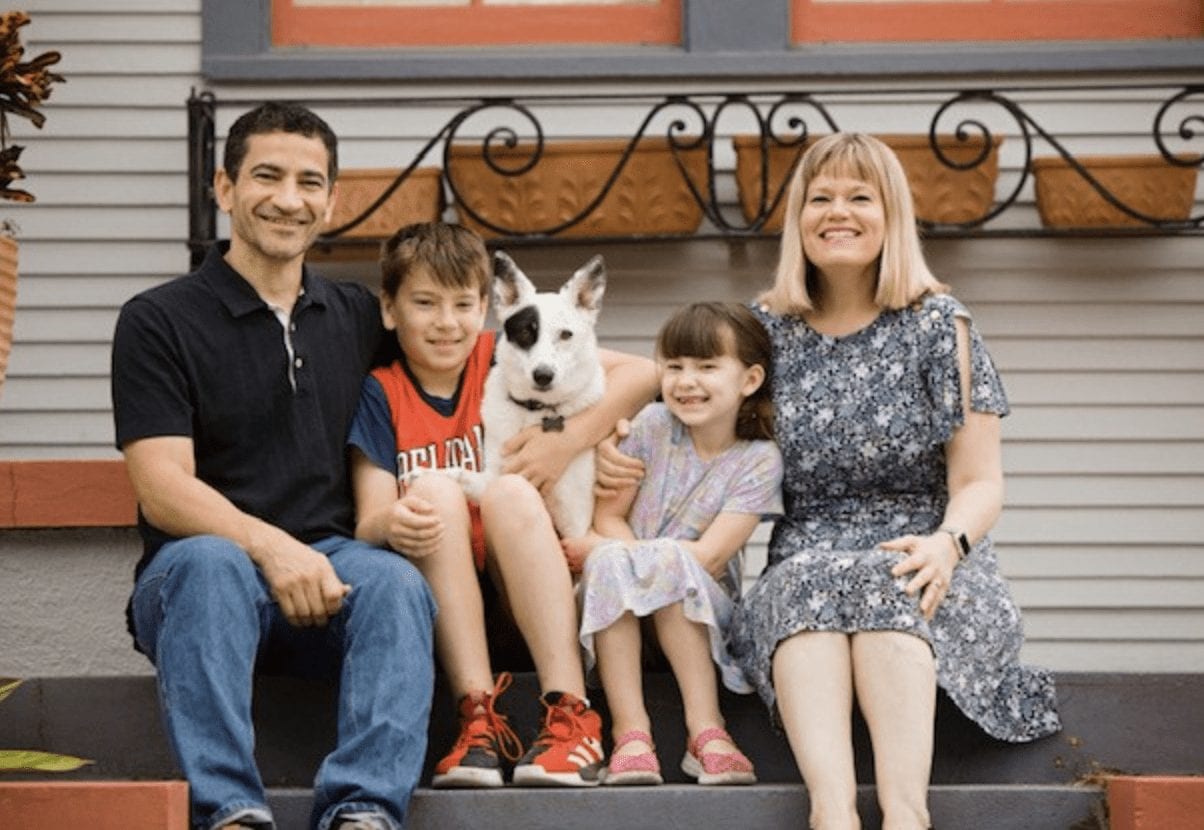 Originally from : Delhi, New York (a tiny village 3 hours north of NYC in the Catskills Mountains of Upstate NY)

Her last NOLA meal would be : Chargrilled oysters, fried catfish po-boy and seafood gumbo from Frankie and Johnny’s.

She believes the best king cakes are found: Dong Phuong. No contest!

During Mardi Gras, you’ll find her ::  Walking with the Wonder Women Krewe in Chewbacchus or hanging with friends and family on Napoleon or Magazine.

During Saints games, you’ll find her :: Grading papers,  grocery shopping, or occasionally rushing in front of the TV to obnoxiously yell “Who Dat!” when there’s a touchdown. I enthusiastically wear black and gold anytime and anywhere, even though I’m not much of a football fan.

Kids at Jazz Fest? NO! We dragged our kids with us once and we ALL regretted it! They were even annoyed when I listened to “Jazz Festin’ in Place” on WWOZ nonstop this Spring! They enjoy smaller, less crowded festivals like Greek Fest and Bayou Boogaloo.

Raising Kids in New Orleans is :: A privilege!  Even though my husband and I are from the Northeast, our kids were born here. They will always be able to say they grew up in New Orleans, the birthplace of Jazz, the cultural capital of America, the northernmost Caribbean city. Growing up here definitely gives them a unique perspective, with experiences unmatched anywhere else in the world. 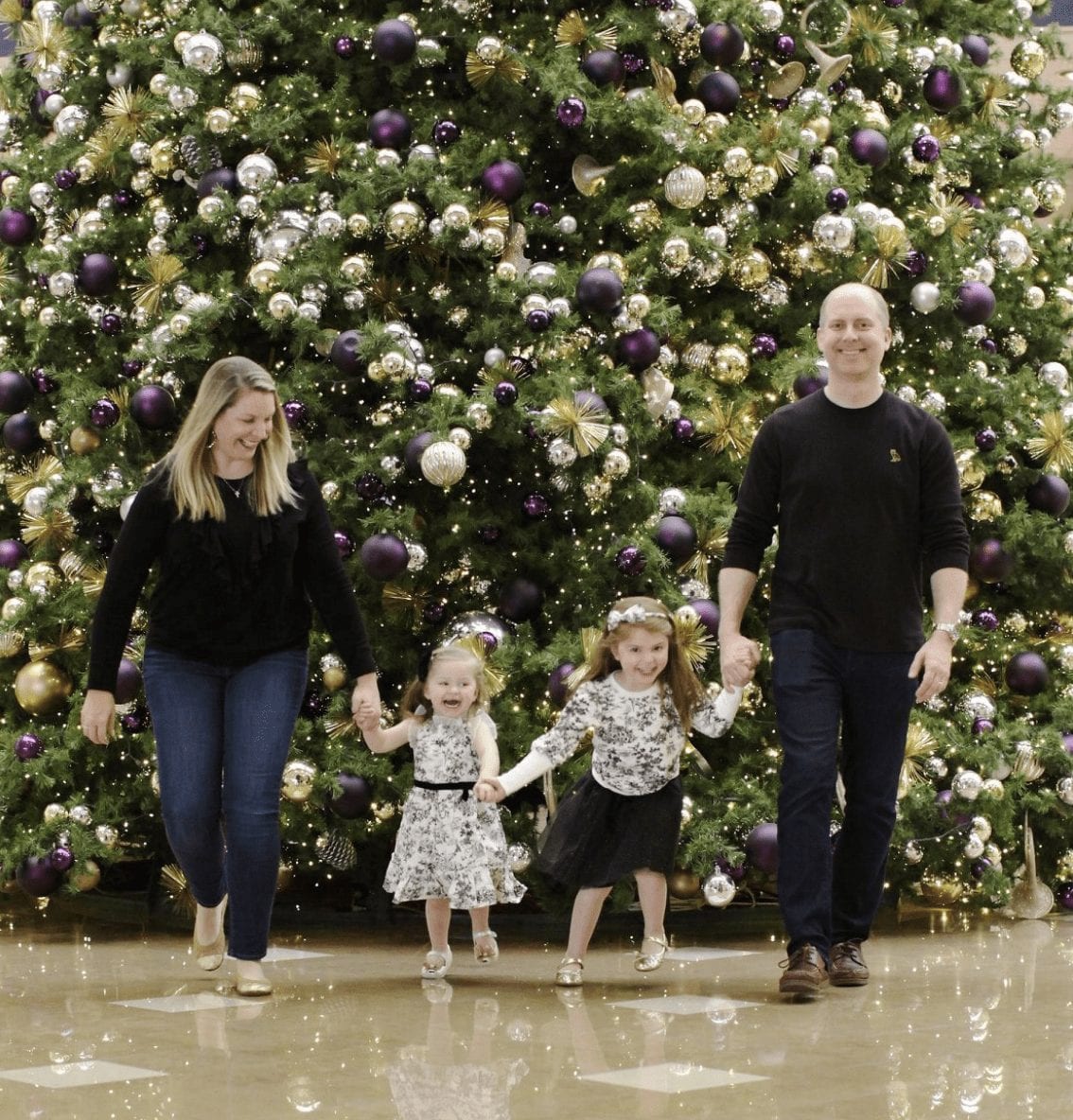 Her last NOLA meal would be :: Boudin Balls from Jacques-Imo’s

Her favorite snowball flavor :: I’ve only had Red Velvet – but it did not disappoint!

She believes the best king cakes are found ::

During Mardi Gras, you’ll find her :: With a large daquiri in hand, near Napoleon with a face full of glitter.

During Saints games, you’ll find her :: Doing something fun with girlfriends while my husband is glued to the television

Kids at Jazz Fest? Haven’t been, but, absolutely not!

Raising Kids in New Orleans is :: new! 9 months in and loving every minute, every bite and every outdoor playdate in the sunshine! 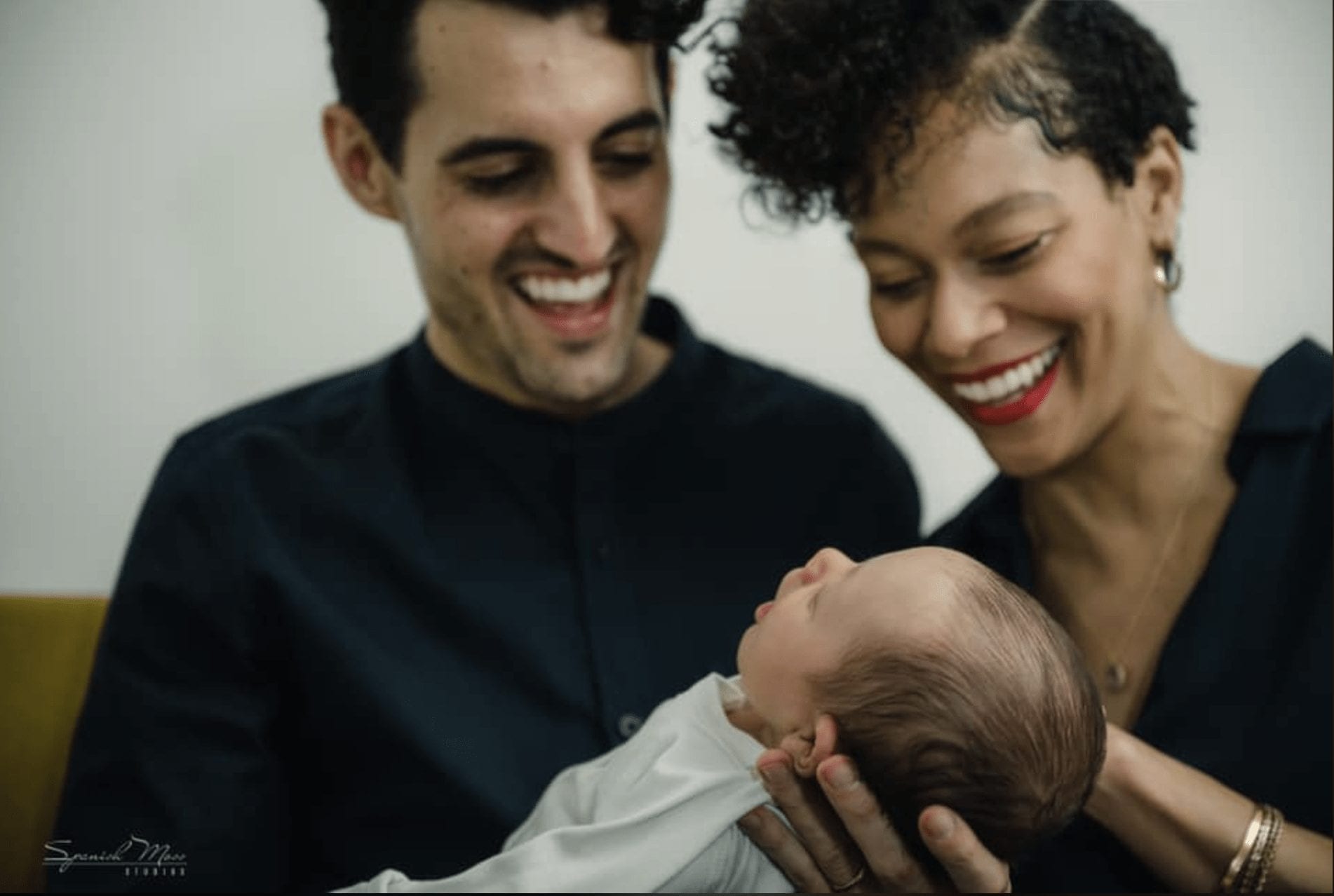 Her last NOLA meal would be :: 1000 Figs – Falafel Sandwich and a side of saltless French fries, they know it is me when I call every time.

Her favorite snowball flavor :: Calm in a Jar Stacheball from Papa Ted’s pop up

She believes the best king cakes are found :: Interesting this is still up for debate.

During Saints games, you’ll find her :: Watching from home with friends/family.

Kids at Jazz Fest? Yes, we were looking forward to attending this year with our son, but that did not happen.

Raising Kids in New Orleans is :: Interesting to say the least, since we moved back we are open to understanding how the journey will be raising our son here. 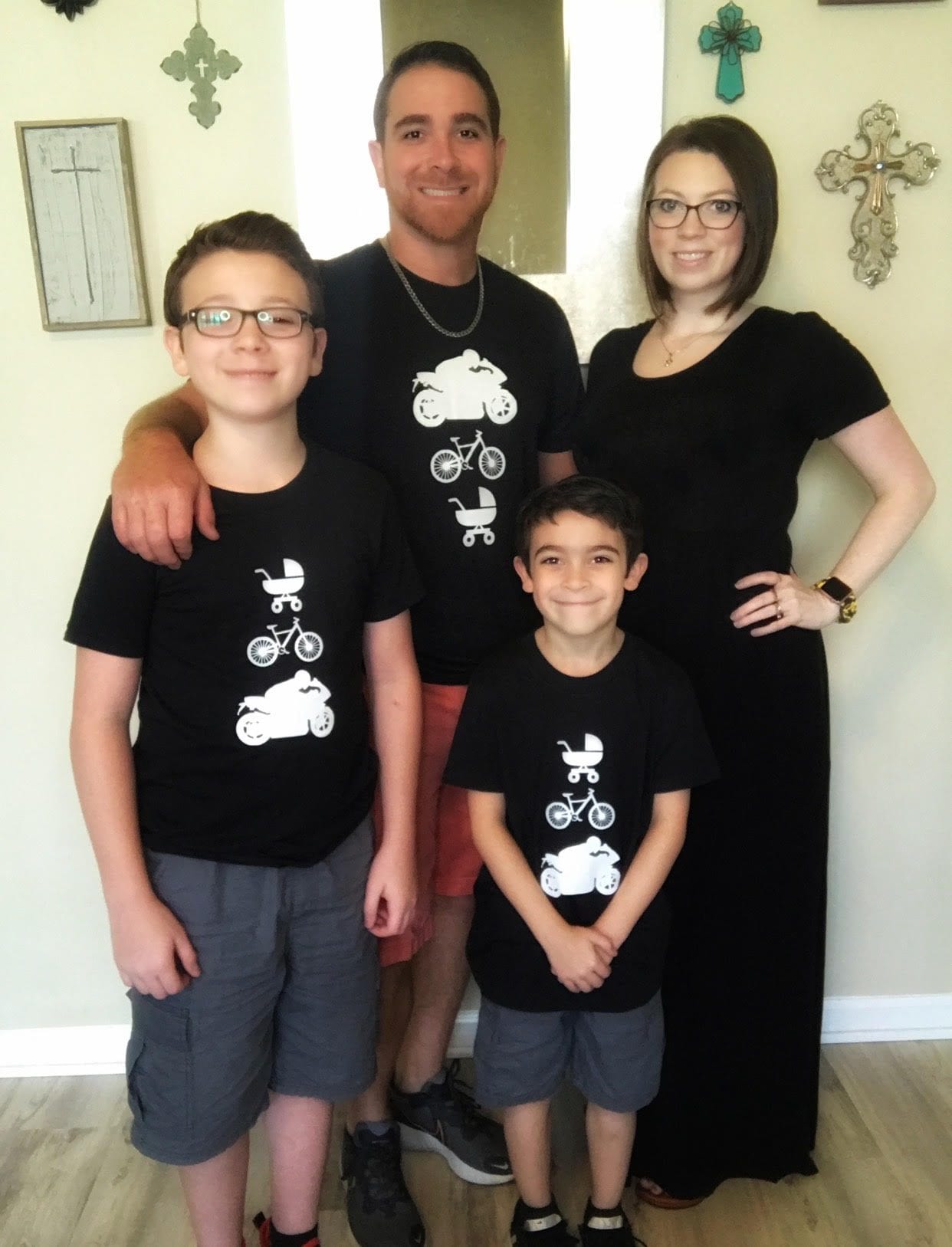 Her last NOLA meal would be :: Gator Bites at Pat O’Brians

She believes the best king cakes are found :: Nonna Randazzo’s
During Mardi Gras, you’ll find her :: Marching in the Parades with my boys

During the Saints games, you’ll find her :: Front and center in front of my TV cheering them on!

Kids at Jazz Fest? No, adults need play time too.

Raising kids in New Orleans is ::  by far the most amazing experience. They get to be apart of a culture that one one else knows or understands unless they live here. 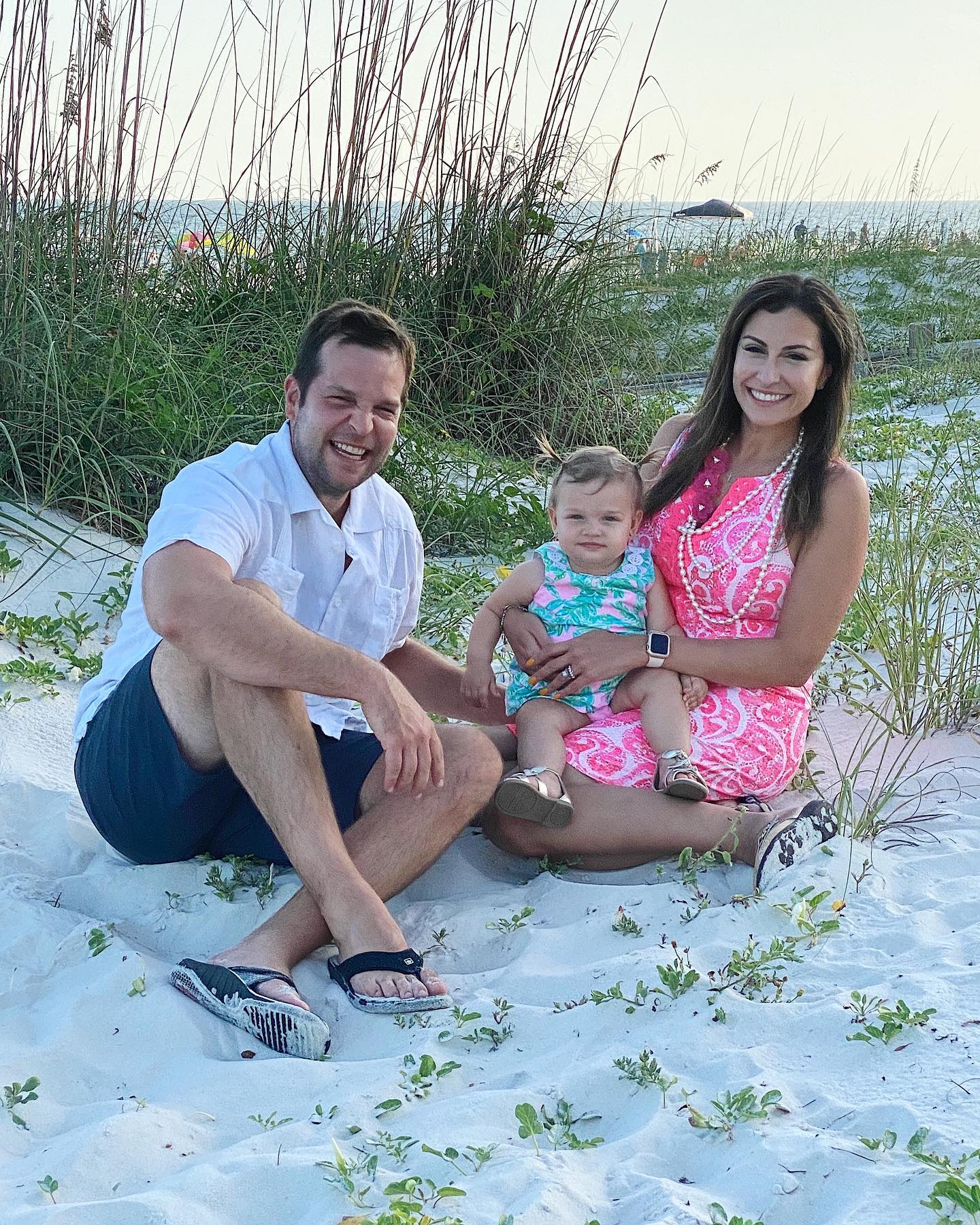 Her last NOLA meal would be :: Either the Squid Ink Tagliolini from Domenica or the Eggs Atchafalaya from Atchafalya. I would definitely need some ice cream from Creole Creamery. My favorite is the Black and Gold Crunch.

She believes the best king cakes are found :: Duong Phuong
During Mardi Gras, you’ll find her :: on a float during the Krewe of Iris or on the sidewalk side of St. Charles by Louisiana dancing and enjoying the parades with my Krewe.

During the Saints games, you’ll find her :: watching the GAME! Everyone in my house is in Saints gear watching the game from the adults, baby, to the fur-babies.

Kids at Jazz Fest? Not yet because Mommy and Daddy need some alone time.

Raising kids in New Orleans is ::  a fun adventure. Being a parent is the hardest, most rewarding job I’ve ever had. Raising our daughter in NOLA has been so much fun. We have been able to do so much with her from festivals to restaurants to blueberry picking. 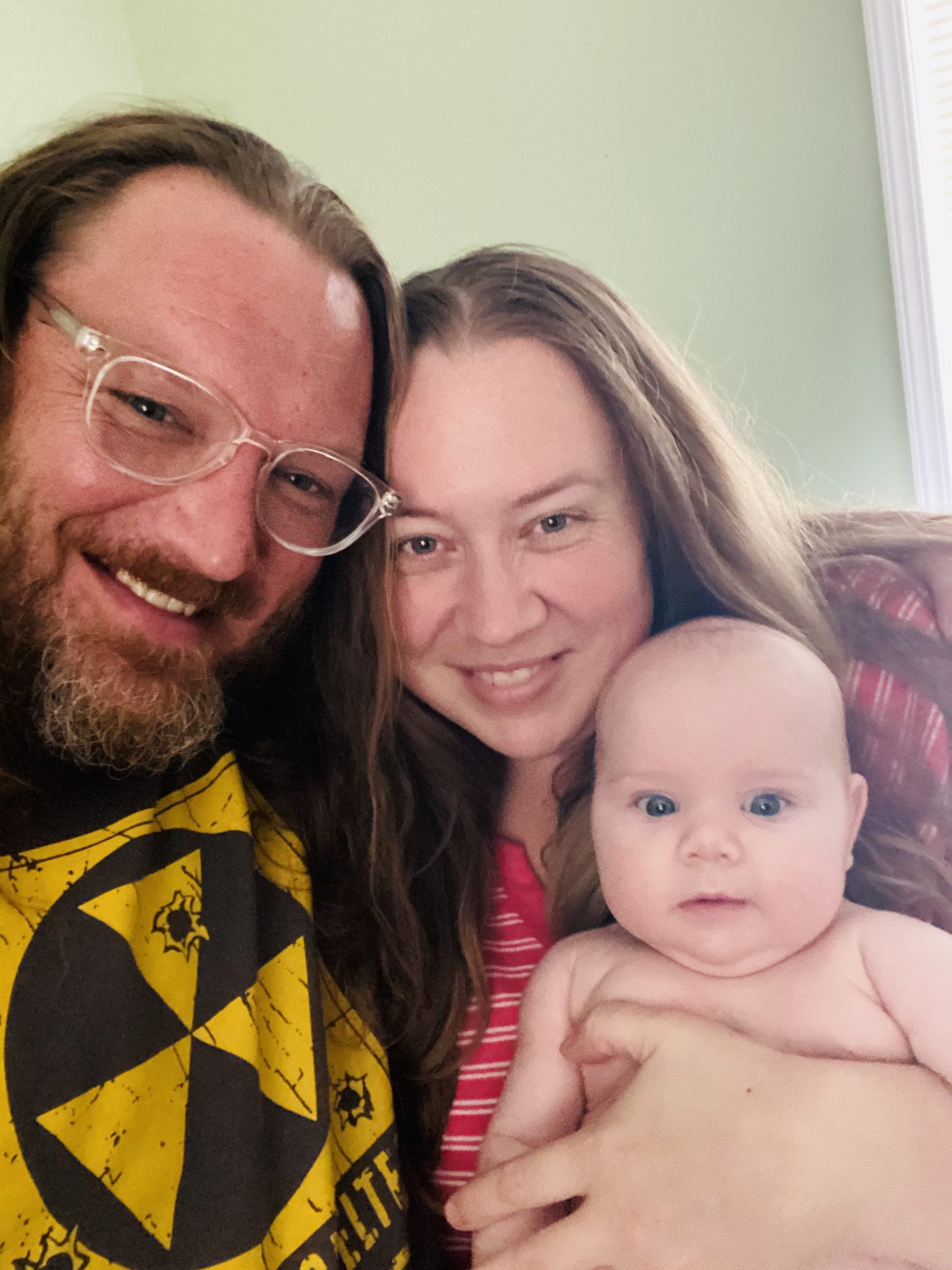 Originally from :: Attica, Indiana. It’s a tiny town most have never heard of, but a stone’s throw away from Lafayette/West Lafayette, Indiana which is home to Purdue University, Go Boilermakers (We had Drew Brees first!)!

Her last NOLA meal would be :: My last meal in NOLA would be an all-day, non-stop food fest! I have definitely thought this out more than once since I haven’t had a proper day out in nearly one year because I was pregnant when COVID-19 graced everyone with its presence and here we are. First, there would be breakfast at the Parish Diner in Chalmette—Pancakes, with bacon and a side of fruit. Then, I’d have lunch at Central City BBQ—the Hogs for the Cause Award Winning smoked wings with white BBQ sauce are to die for! That meal isn’t complete without the best Brussel sprouts I have ever had… Seriously! Next, on to Santa Fe for the bean dip and a house margarita. From there, I will need to walk some of this off so I can fit more food later, so a trip into the French Quarter is necessary. While perusing the Quarter, I will stop at Tableau for a warm glass of Grand Marnier and a Crème Brulee, with a French 75 to go, as I continue my stroll. By this time, it is 4 pm, so I will go to Bombay Club for a cosmopolitan before turning my sights closer to home and heading to Bywater. While in Bywater, I will have to drop by Frady’s, before they close at 6pm, to grab a fried shrimp poboy, fully dressed, and a beer. I’ll chat with others as I await my food and when it’s ready I will walk down to J&J’s Sports Lounge to eat and have another beer. Finally, before heading home, I will walk over to Rosalita’s Backyard Tacos, in Rosalie Alley, and order 3 fish tacos, 3 pork tacos, and 3 steak tacos to enjoy with my husband on the couch at home!

Her favorite snowball flavor ::  Coconut, but in all honesty, I have only tried a few different flavors, so I have some work to do!

She believes the best king cakes are found :: at Dong Phuong (cream cheese), but will also buy several from Bywater Bakery and Rouses throughout the season!

During Mardi Gras, you’ll find her :: mostly attending the smaller parades in Bywater and Marigny neighborhoods. On Mardi Gras Day, we start at Franklin and Royal and walk with the Society of St. Anne through the Marigny.

During Saints games you’ll find her :: in a warehouse watching the game. My husband and his buddies share warehouse space together and it’s a nice central place to meet our friends and watch the game.

Kids at Jazz Fest :: Definitely! It’s one of the things my husband is most excited to introduce to our daughter.

Raising kids in New Orleans is :: the privilege of a lifetime! I’m not from New Orleans, but my husband is and I marvel at the stories he tells me about growing up. The culture and way of life in our great city is second to none and I can’t think of any place better for our tiny human to grow up! 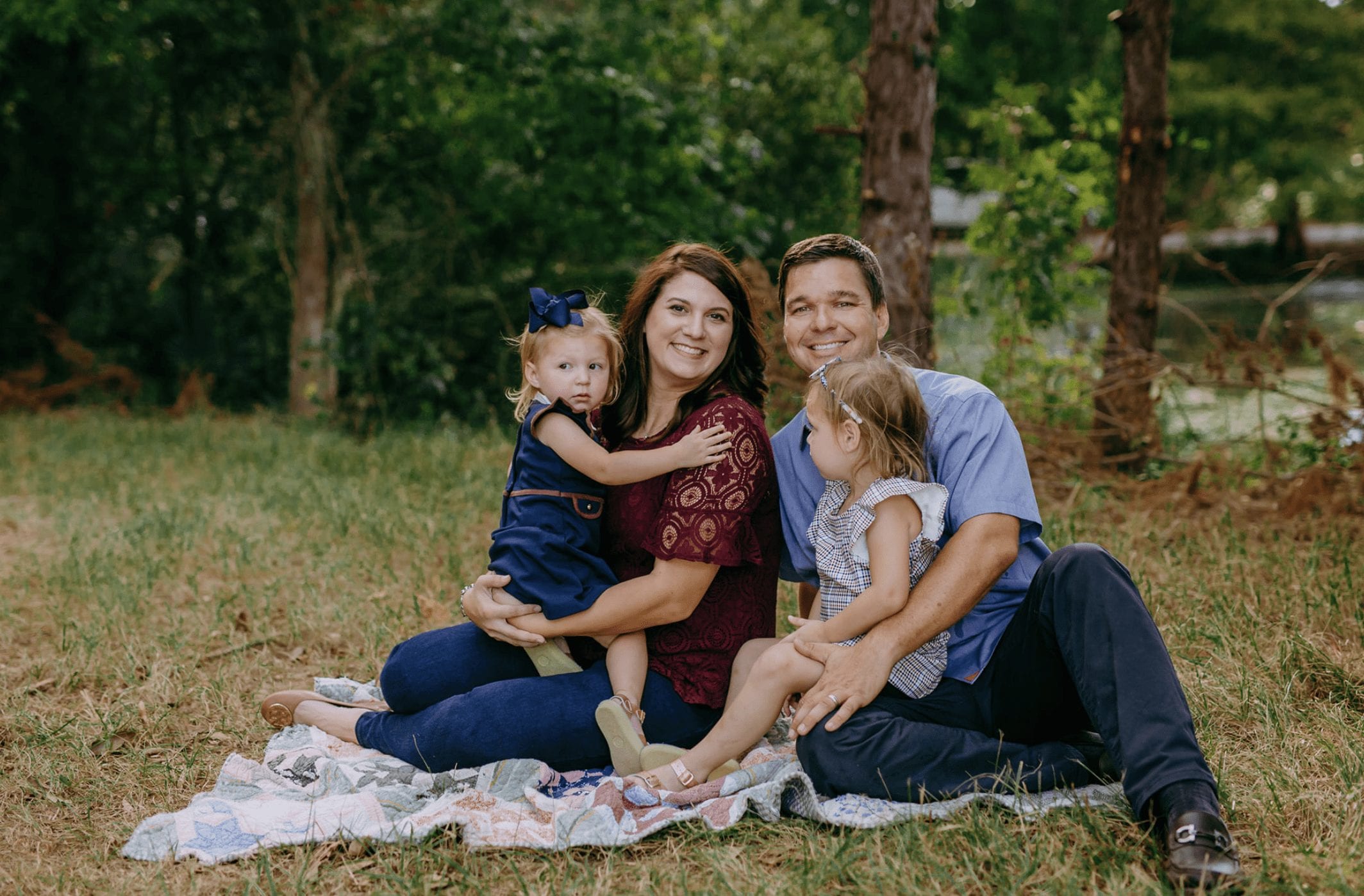 Originally from :: Born in Jacksonville, MC, but only remember New Orleans

Her last NOLA meal would be :: Mr. B’s Shrimp and Grits and salad. They have the best salad dressing.

She believes the best king cakes are found :: So many options, but my favorite are probably Manny Randazzo’s.

During Mardi Gras, you’ll find her :: at basically every parade.

During Saints games, you’ll find her :: shopping at the mall. Love the Saints, but never been one to sit and watch the whole game.

Kids at Jazz Fest? Never been to Jazz Fest

Raising Kids in New Orleans is :: is EVERYTHING. I love how the city provides so many different experiences for us and our kids.

If you are interested in learning more about becoming a New Orleans Mom contributor OR writing a guest post, please email [email protected]