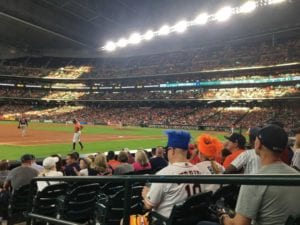 I’ve read all the posts about taking the kid-free trip and making time for you and your spouse. While deep down I knew that would be good, it never happened. In my child’s six years of life, he has never spent the night out in order for us to take a trip. Up until a couple weeks ago. No matter how late, we would always pick him up and bring him home after a date night. We’ve already established that we won’t allow sleepovers at friends’ houses until he reaches a certain age, but we’ve never approached him sleeping at his grandparents’ house.

A couple weeks ago, my sister and brother-in-law got tickets to a game, and we really wanted to go, but the only way that could happen would be for our son to spend the night out. We called his grandma and, of course, she was elated and excited and more than willing to take him for the night (heck, she wanted him the entire weekend). Everyone seemed excited about it, but I was feeling pretty nervous. What if something happened? What if he woke up in the middle of the night and decided he wanted to go home? We’d be over six hours away and not able to get him quickly. I reached out to a few friends about my anxiety, and they assured me that it would be fine. It’d be like ripping off a Band-Aid, and I’d wonder why I hadn’t taken a kid-free trip sooner. I feel the need to mention that during this time, my husband had no concerns about our kid spending the night out and all the worries seemed to be coming from me. 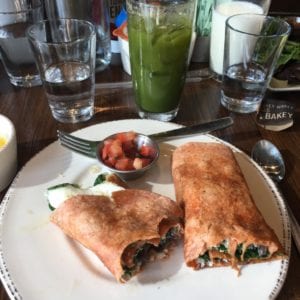 When the time came for us to leave, we packed our bags and put together all the essentials for our six year old. He was super excited about his first sleepover and spending the night at his Bebe’s house. There were no dramatic goodbyes or tears from him when we dropped him off. In fact, he nearly pushed us out the door. During our drive, I wondered how he was doing and kept thinking how quiet the car ride was. I left the check in phone calls up to my husband because I didn’t want to come across controlling or overly worried. After getting a few text messages with photos showing how much fun he was having, I felt myself lighten up a bit. We got to Houston, had dinner, went to the game, grabbed brunch the next day, and headed home. We had a blast, and so did our son because he wasn’t too excited to see us when we picked him up. He was having so much fun he really didn’t want to go home.

Looking back, he had a great time, he was safe, he was taken care of, he had fun, we had fun, and nothing too exciting happened while we were gone. It didn’t take too long for me to stop worrying about him, and when we picked him up everything was fine.

Lesson learned: we took the kid-free trip and everyone, including myself, survived. And, there will definitely be more kid-free trips in our future!

No, You Don’t Need to Share to Have a Happy Marriage

How to (Not) Be Santa Claus: A New Mom’s Guide