New Orleans loves their beloved Popeyes Fried Chicken. I’m pretty sure every NOLA Baby has a picture of them as a toddler with a drumstick in hand while catching a Mardi Gras parade. It’s about as Naturally ‘Nawlins as you can get. So when Popeyes introduced their new Chicken Sandwich, just about everybody in the 504 area code ran out to get one. 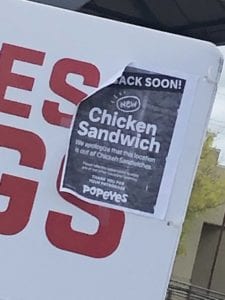 So much so that now they are pretty much impossible to get. I luckily was able to try this sandwich not once but twice last week. But just this past weekend, my son and I visited 3 locations in the Metro area just to be told they are sold out. Talk about a bummer.

I can’t seem to go on social media these days without seeing a Facebook post or meme of the epic throw down of 2019, Popeyes vs. Chick-fil-A. I have my own opinion on both of these delicious sandwiches but I had to ask some friends who were lucky enough to try the hottest sandwich around and I am happy to share the results with you.

So NOLA Moms and Dads, what do you have to say regarding the Popeyes vs. Chick-fil-A sandwich debate?

“Popeyes’ sauce really makes it. Both have good flavors, but I like a lil kick.” – Allyson H.

“CFA has a nice flavor with some unexpected kick, not spicy just good flavors. It’s always warm and fresh, which is good. It probably tops all other sandwiches (until now) on the consistency front. I’ve never loved that it didn’t have a sauce and most of their sauces are ok. The breading is decent, it reminds me of KFC original recipe which is nice, but lacks crunch. So, if you like that, that CFA is probably your jam. Popeyes was just wow! So, first thing I noticed was how it was so perfectly crunchy on the outside and then amazingly juicy on the inside. This was like if someone battered and fried this fresh. Then the bun was a little toasted. So, it held it all together perfect. I had the classic. It had just enough mayo. I also had a bite of the spicy, which had a spicy mayo that was delicious too. But the real deal was the pickles. They were like homemade, thick cut with tons and tons of flavor. They just set it apart from any fast food sandwich I’ve ever had. Popeyes wins by a mile for me.” -Victoria J.

“The Popeyes chicken is crunchy unlike Chick Fil A which makes it so much better. The bun is also softer and fluffier than CFA. I always felt like there was something missing on the CFA sandwich but the mayo and pickles on the Popeyes is all you need.” – Timmy M. 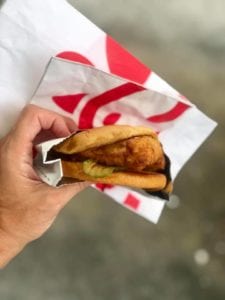 “The Popeyes sandwich is ‘okay.’ I like the spicy mayo on the sandwich but would, hands down, order a grilled chicken sandwich from CFA because it doesn’t feel like a brick hit my stomach.” – Ricky T.

“My opinion is that I haven’t committed to the line yet.” – Jamie M.

“Popeyes sandwich was worth the 40 minutes I had to wait to get it and since the children were home with my husband while I waited, I think it only improved my experience with the sandwich.” – Tara H.

“Spicy Popeyes wins and it’s not even close!” – Sean S.

“Popeyes beats Chick-fil-A on flavor, hands down. But, I had to scrape off 98% of the mayo first. I wasn’t the hugest fan of the Chick-fil-A sandwich to begin with, but now I’ve got even less reason to eat it if there’s a Popeyes near by … and now I know to ask for no mayo.” – Amanda T.

“I tasted Popeyes before the craze and although I’m not a huge CFA fan because the CEO isn’t a fan of my family, their sandwich and customer service is the BOMB.” – Nette A 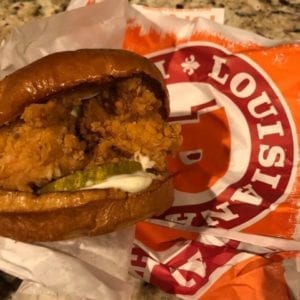 So there you have it New Orleans Moms! Seems like those I interviewed preferred Popeyes! What about you? Let us know!

Why You Should Still Send Holiday Cards

Why I Am Okay With My Kid Bringing Home Average Grades...