As I walked into the NICU for the first time when my son Liam was born, I didn’t know how much my life was going to change. The room was filled with nurses, doctors, babies and more machines than I could count. The smell of antibacterial remnants was powerful and the sounds of the beeping machines is still something that wakes me in my dreams.

I inadvertently joined an exclusive group of powerful parents that day … a group no parent ever dreams they’ll be joining when her babies are born. My babies were in the NICU because they were both extremely premature; however, not all babies in the NICU are preemies. Some may have a congenital health problem, another may be a full term baby that needs extra help breathing, or perhaps they have a genetic disorder. 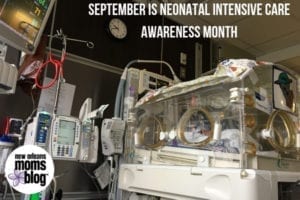 Despite the reason, being in the NICU is a very challenging experience. Did you know that September is Neonatal Intensive Care Awareness Month? I didn’t know, but I’m glad that there is an awareness month because before I experienced the NICU myself, I had no idea what went on behind those closed doors.

There were days where I saw a baby being discharged to go home, and while I was happy for that family, I was also sad that our day had yet to come. I’ve seen my own baby hooked up to multiple machines with wires attached all over his little body; he even had IV’s in his head. There were also some pretty awful moments where I saw parents weeping while they held their baby, all the while I had no idea of their personal struggles.

Each parent and baby has a different and unique story. However, one thing remains the same in each family’s journey, and that is they are in the NICU for the foreseeable future. Some may be in there just for a day or so, while others may be there till their due date and for some, even longer. The NICU is filled with stories of miracles, but sadly, also tragedies.

As a parent, you are thrown into an environment that is full of fear. You are worried about your newborn and all the while your mental health is being clouded with unspeakable fear. I found myself unable to sleep the majority of the time my babies were in the NICU. You don’t want to miss a call, so you sleep as light as you possibly can in fear that the phone may ring from the hospital.

And then there is guilt. Guilt of how it’s impossible to be with your baby 24/7. Some parents have other children they have to tend to and some may have to go back to work while their child is still inpatient.

During the month of September, reach out to those you know who are in the NICU. Learn their story; let them share it with you.

Next time you walk past the NICU doors as you are visiting a newborn baby, keep in mind the parents and babies behind those doors. They are fighting a struggle most will never experience.

Please Stop Comparing Your Dog to My Baby