Author’s note: Epinephrine is the name of the medicine that counters an allergic reaction and is often administered in a patented syringe with the brand name “EpiPen.” Although our family uses another syringe brand, the name “EpiPen” has become synonymous with epinephrine injections, similar to “Bandaid” for “bandages” or “Kleenex” for “tissues,” and so for ease of understanding, we will call our injector an “EpiPen” in this article.

I’m the mom of a child with a peanut and tree nut allergy, and I can honestly say I never anticipated this in the wide world of parenting. It was a tough pill to swallow when we got our official diagnosis and instructions on how to administer epinephrine. At the time, I wondered if we could possibly go our whole lives without ever needing to use it.

Initially, we were under the impression that while he had a bad allergy that caused hives, he was not at risk for anaphylaxis, and that the EpiPen was just a precaution, but as it turned out, that was not the case. When he accidentally ate a cashew, he had a multi-system reaction. I was not well-informed enough at the time, felt Benadryl was enough, and watched him like a hawk for wheezing, coughing, or gasping for breath. He threw up and was covered with hives, but never seemed at risk for being unable to breathe. I happily reported to our allergist that he had a reaction but did not need epinephrine. However, our allergist walked us through the concept of a multi-system reaction and explained that we should have used the EpiPen. In short, he told us: you got lucky this time.

That was an almost unbearable punch to the gut. My kid is okay only because we got lucky. Talk about mom guilt. I prayed there would never be another incident, but I knew if it happened, we would not hesitate to inject epinephrine. We could not rely on luck.

Unfortunately, another incident happened, at school this time. My sons both had their school Easter parties on the same day, and I was moving back and forth between their classrooms, trying to spend time with each boy. My younger son was eating a slice of pizza when I went to my oldest son’s room… but when I returned a couple of minutes later, I spotted it in his hand: a cookie studded with mini peanut butter cups. Bites were already missing. My heart stopped.

My son is only two years old. We’ve taught him to say “I can’t have peanut butter,” but he couldn’t recognize a peanut butter cup as dangerous.

I flew across the room and snatched it from his hand. “Is this peanut butter?” I demanded. One of the teachers told me it had been on an unlabeled tray and she didn’t know it was unsafe, but I knew. It was peanut butter, and my kid had eaten it. My heart was pounding, and my brain was trying to ration through it: maybe, just maybe, the bites he had eaten didn’t have any peanut butter in them. I scooped him up and carried him to his brother’s classroom, holding him tight and inspecting him for hives. Thinking back to when he had eaten the cashew, it had taken about an hour before his symptoms showed up. I started getting nervous that he would have a reaction at school if we stayed and made the decision to head home, where I could watch him more closely. I apologized to my oldest son but said we needed to leave his party early. It would take less than 15 minutes to get home.

In the car, my son’s speech became slurred, like he was having trouble forming words. I started getting more nervous and drove as fast as I could. He suddenly started vomiting in his car seat, a much faster reaction than I had anticipated. I called my husband, who was working from home, and told him to get the EpiPen out and ready for when we arrived.

When we got home, I peeled him out of his clothes and did a full-body inspection, but there were no hives. I put him into the bathtub and let him soak for a little, while keeping a close eye on him. So far, it only seemed to be a one-system reaction, which does not require epinephrine. My heart was in my throat the whole time.

But in the following half-hour, he began throwing up again; his nose ran; he started coughing; and when I spotted a single hive appear on his arm, I didn’t wait to see if any more would develop. We were now in a multi-system reaction, and it was time for epinephrine before it got worse.

We quickly explained to him that we were going to give him a little shot that had special medicine in it to help him feel better, and then I held him tightly against me, keeping his arms and legs locked, while my husband administered the needle. My poor baby screamed and screamed, and all I could do was tell him how very brave he was being and how this was going to help.

The epinephrine did its job. All of the symptoms disappeared. We had been told to expect the medicine to hype him up and that he would be zooming around the house, but he had the opposite reaction, lying limp on the sofa like a ragdoll for about an hour. I didn’t let him out of my sight for the rest of the day, but the danger seemed to have passed.

Overall, it hadn’t been anything like what I had expected. For us, there wasn’t any gasping for air, or high-drama, panic-induced needle plunging. It was a calm decision in a controlled environment. For that, I am so grateful. His allergic reaction was getting worse, and we knew what the protocol was, so we followed the steps and did what we had to do– even though I had tears in my eyes and was scared out of my mind the whole time.

Our situation came with a ton of “what ifs” that left me shaken for a while. What if I hadn’t been at school and seen the cookie? Why had it been brought in the first place? Why hadn’t it been checked before being given to my nut-allergy child? Should I have risked getting in the car with him as I did, or should I have stayed at school and administered the EpiPen there, or sooner? Ultimately, it led to a good conversation with the school (where the staff has apologized to me profusely) about how they can be more vigilant and the steps they can take to ensure this never happens again to any other child with a food allergy.

Food allergies are scary, and it takes the cooperation of everyone involved to keep a child safe. I thought our food allergy journey would be pretty straightforward, but it’s had a steep learning curve. I continue to read and research for my child’s health and benefit and am becoming a better advocate for him each day. Using our EpiPen was something I had hoped we’d never need, but now that it has happened, I’m better prepared for the next emergency, and better prepared to protect my son. 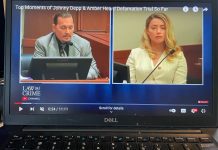 An in DEPP look at the most unHEARD-of Trial

My Week With Shingles: Perfection is the Enemy of Good