I have this “thrill-seeking” mentality. I constantly blame it on enneagrams and how 7s need to constantly find adventure and crazy cool things to get into. As most people just want to travel or meet someone famous on their bucket list, mine often consists of jumping or flying off of a piece of mother nature. Being in a plane is my favorite thing, but I have always dreamed of riding in a really fast jet.

Never in a million years did I think that this mom would actually get a chance to do it. 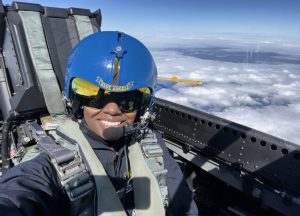 This experience started with my job in teaching.

For me, being in education has always been less about the content and more about building relationships with youth. Being an elective teacher gave me the opportunity to do just that. It’s super important to be someone who is present. I would bond with parents so that they knew that their kid was safe during the day, I would show up to weekend dance recitals, soccer games, and even graduation 5 years later.

When we moved back to New Orleans, I decided that I wanted to find a way to make a difference outside the classroom. I never thought that this different route would take me into the sky!

My boss reached out and said that the Navy Blue Angels had a program called Key Influencer. The program was designed to showcase an educator who is changing lives in the community. I got a phone call a couple of weeks later that said that I had been selected to move to the next round and get medical screenings done.

The phone call that I received on a sunny Friday afternoon was one that lit up my whole day. I had been chosen as the final pick and would be taking a catered flight with the Navy Blue Angels two days after my birthday.

It was like the first day of school all over again, trying to sleep and prepare myself for what was about to happen.

Two days prior to the flight, you are given a list of diet suggestions and make sure that you are hydrated.

I woke up early to eat a light breakfast and drink a bunch of water.

I was met with first-class treatment, got to speak with the Navy base CEO, and was given a VIP uniform. I was taught different ways to stretch my legs as I would accelerate in the sky, and breathing techniques to prepare myself for the intensive feeling of my chest cavity pressing in.

The coolest part was learning about the “ bonus” flight! Yet, the bonus was not something you wanted. It referred to an emergency parachute landing if something were to happen in the air.

As I walked outside on the runway, I still hadn’t grasped what I was actually about to do.

I practiced my breathing techniques again, as the pilot explained what all the buttons were. After all the safety straps, he tucked two plastic bags on my leg and instructed me to use them if I needed to vomit. I laughed it off and made jokes about having to stick vomit bags in my pocket.

Little did I know, the techniques were 100% necessary. Not only did the bags need to be utilized, but losing consciousness was also on my agenda that day.

We cleared for takeoff and as we moved down the runway, the speed quickly escalated. Next minute you know, I hear “ Readddddy” which was the command to let you know it was time to start your breathing exercises. As I flexed my legs and pressed my back against the seat, the Hornet pointed straight to the clouds.

It felt like a magic carpet ride, as we cruised through the sky and the canopy was so clear, that it was as if I could reach out and grab the clouds alongside.

In the blink of an eye, we were over water and Pilot Griffin prepared me for the real excitement. G force was something that we had discussed before the flight. He told me that the faster the acceleration, the harder it would be to breathe, but the more tricks we would be able to do. From flying at 7.5 g force to hanging upside down and barf bags flying out my pocket, it was the most exhilarating thing I have ever done in my life. I wouldn’t have changed it for the world.

Beaming with excitement is an understatement. How amazing is it to educate the kids of New Orleans, and show them in a cool way, that anything is possible?

The work that is done at the Naval Air Station Joint Reserve Base New Orleans is nothing shy of amazing. The pilots work so hard and every bit of it showed. So thankful and can’t wait to see what’s next to check off my list!