My husband started coaching over 20 years ago, before we started our family. This October we will be married for 25 years. We have two daughters, Ainsley (20) and 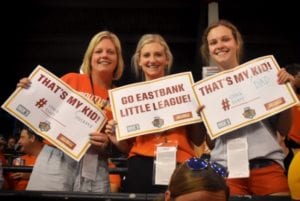 Shelby (17), and our family dog PJ, 7 years old who is also a true baseball fan. Scott coached Dixie Youth baseball at Little Farms playground, but even as a dad of daughters he wanted more out of baseball, so he decided to start the real Little League in the New Orleans area.

You will hear a lot of people saying their kids play “Little League” but that’s just a name. Scott formed Eastbank six years ago. He himself picked the name Eastbank, and the kids that play either live or attend school in the boundary. The league offers baseball starting at age 6 going up to age 12. The six years that Eastbank has been in existence, his team has won state 3 times. This year he kept telling my family, “we are going to Williamsport to play in the Little League World Series!” Welllllll … he has also said this the past 6 years.

Fast forward and Eastbank won district, state and then regionals. Wow! Yes, we were going to Williamsport this year! State was held just down the road in Lafayette, which occurred around tropical storm Barry so it was pushed back a little. I was upset about this because our youngest daughter who is a senior at Archbishop Chapelle and on the Hi-Stepper dance team was scheduled to leave for dance camp. Therefore, this meant that I had to pick between seeing her dance or watching Scott coach our adopted sons for the summer. We were able to make it to see some of her performances, thankfully. Next up was regionals in Waco, Texas. The whole family was able to attend, including PJ the dog. We were in Waco for a total of 9 days, which also resulted in a win for Eastbank. The games were unbelievable! We outscored our opponents 109-7 throughout district, state and regionals.

We came home from Waco on Wednesday August, 7th. Scott and the team would be flying out on Saturday, August 10th to head to Williamsport. August 8th was actually Scott’s birthday, so we did a rushed celebration because Fox8 news was coming to the house to do interviews with Scott and a few of the players. On Friday, August 9th we had a fundraiser and meet and greet scheduled. The two days were a total whirlwind!

Saturday the 10th arrived, and the boys were off to the Little League World Series.  Monday, August 12th was our daughter’s first day of school, so Scott had to sadly miss seeing her off. Scott wanted us to be in Williamsport together to experience this whole crazy thing with him. I contacted my daughter’s school and advised them that this was the chance of a lifetime for her to attend. So my daughters and I flew out Wednesday night. We would miss the parade in Williamsport, but we were able to attend the opening ceremonies on Thursday. 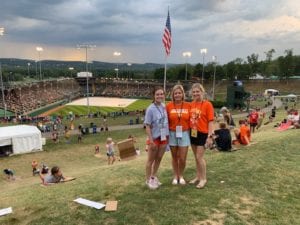 On Thursday when we met my husband at the top of the hill by Lamade Field, I had chills all over; the field was amazing! It’s so much more than what you see on television. It was truly incredible! My youngest would miss school Thursday, Friday and Monday but she didn’t want to leave. Her ring ceremony was scheduled for Thursday, August 22 (such is the life of a mom), so Ainsley and I flew home on Wednesday right after the 10:00am game. We attended the ring ceremony at St. Louis Cathedral without my husband. It was killing him to miss a very important moment in our daughter’s life, yet on the other side it was killing me and my daughter to miss the game that night. I’ve dated my husband since 1989, and I’ve never missed a game he played in or coached. So this was a first. But then again, so was being in the Little League World Series right as my daughter’s senior year was starting.

My daughter and I were able to watch the whole game thanks to the ESPN app and air pods. This is the first time I’ve watched sports in church, and I felt awful doing it, but it was a must. If they won this particular game, it would put them into the US championship game. The game was on a rain delay which started right when Mass started and ended right when Mass ended. We were at the front of church taking pictures when my husband called me. He was crying, and I was crying. We couldn’t believe it; his team was gonna be in the US championship game!

I then searched for flights to get me and my oldest back to Williamsport in time for the game on Saturday. My youngest couldn’t come back because she had two ring dances to attend. On Saturday after he won the US championship game he called my youngest on the phone to talk to her. She was the first person besides the team he talked to immediately following game. The next day they would play for the international championship. And they won! My daughter was upset she couldn’t be there to witness it. 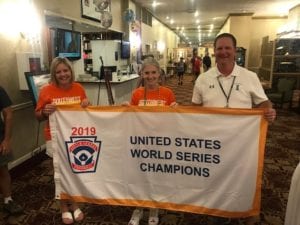 My girls and I love to watch him coach. We have made many friends over the years from him coaching. Our summer consists of baseball and more baseball. We sometimes sneak in a vacation for a couple of days around the 4th of July. However, this year we weren’t able to do so. Over the years we have missed our daughter’s dance, first days of school, weddings and showers all for a team that we consider adopted boys. My husband works on this league year round, so he gives up a lot of time away from our family. Like he says, he doesn’t play golf, flag football, softball or hang out in a bar room. This is his hobby – coaching boys. He teaches more than the game of baseball to these boys. Life skills, responsibility and more. I wouldn’t trade a thing. 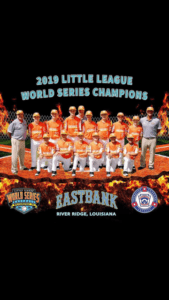 Since he has won The World Championship, the celebration continues. Interviews by various news stations local and nationwide, luncheons, appearances at festivals, football games and appearances at the Babycakes game. A championship parade New Orleans style and dinner at The Governor’s Mansion. And next up, a visit to the White House with President Trump. My husband makes sure we are included in these celebrations because he knows we have all sacrificed a lot along the way.