Just like the lyrics to that famous song, breaking up IS hard to do. However, I’m not talking about a romantic relationship with a partner. I’m referring to a friendship. I’ve found, in many ways, that ending a friendship is just as hard, if not harder, than ending a relationship.

Being lucky enough to have a best friend is pretty awesome.

You exchange texts, chat on the phone, and enjoy time together doing your favorite things. You share things on social media, send pins on Pinterest, and shoot each other that parenting post you found so useful. And as mothers, you also have the opportunity to build a relationship with their children, which is pretty awesome. And of course, your children and their children build friendships as well. 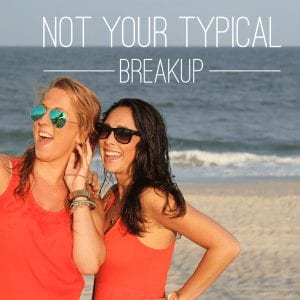 But what happens when you are no longer friends?

Whether you had a fight or just grew apart, the ending of a friendship is tough. It feels like a breakup!

I currently went through this with one of my longest friends, and it’s tough. We have been friends for many years, and even though there were times we were inseparable and times we weren’t as close, the one thing that remained consistent was our friendship.

Now, not having her there, I feel lost.

We celebrated high school graduations together, late college nights, becoming adults, and our children’s births, parties and baptisms. And now, not having her in my life, I feel broken.

I’m addicted to social media just as much as the next girl and seeing her life via Facebook has hurt a few times. I’ve seen her out with her friends having a blast, and I’m missing. While I’m happy she is happy, it’s hard to see her life go on and not see me in it.

It’s been about 6 months since our “break up,” and thankfully, time is healing the invisible wounds. I’ve recently found that most people had that one friend that “got away,” just like a past love. Some have dumped a friend or felt dumped, and it’s more common that I thought. My friend was there for me for many years, and I’m forever grateful for that and maybe as the months or years go by, we can hopefully recover our friendship which is now lost.

Have you ever experienced a “breakup” with a friend?

5 Best Places to Buy Matching Holiday Pajamas for Your Family

How New Orleans Moms Blog Is Giving Back This Holiday Season