Disclosure: our partners at Charlie Banana sponsored this post.

It’s Never Too Late to Switch to Cloth Diapering

When I was pregnant with twins, it totally altered the way I designed my registry, both for good and for bad. I eliminated much of the pricier gear and opted for hand me downs and second hand items instead. That turned out to be one of wisest decisions I made as a new mom.

I feel like the second option would have been up my alley, and I wish I would have opted to design my registry and my expectations with that goal in mind.

But, a year and a half into parenthood, I’ve learned it’s never too late to try something new. So, here I am giving cloth diapers a try and wondering why I haven’t done this sooner. 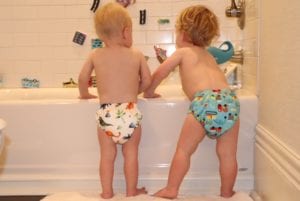 I have been using the Charlie Banana One Size diapering system for the past few weeks. I was able to enjoy all of the perks that originally drew me to cloth diapering … the SUPER cute diaper covers, the cost savings, the positive environmental aspect. And, I was also able to do it with much more ease than I expected.

The Charlie Banana system has been super user friendly and they come with both washable liners and disposable ones. I thought it would be difficult to figure out the washing routine but their system makes it efficient. I’m doing a bit more laundry these days, but it’s a small trade off to enjoy all of the above mentioned perks. You can also buy a wet bag and a diaper pail bag that helps with the organization and washing routine immensely. 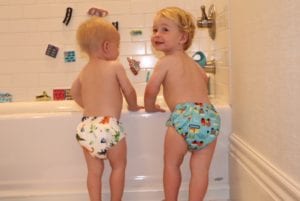 One of the perks I wasn’t aware of, but I’m most looking forward to as my boys approach their second birthday is that the diapers are making them more aware of when they have used the bathroom. They are using their words to tell us they need to be changed. And, I feel like their new found awareness will help to make potty training easier.

And I can’t stress enough how cute these diapers are and what a great job the Charlie Banana company has done with packaging and branding. They make great baby shower presents!

Maybe you are new singleton mom or a new mom of multiples and everything about impending parenthood seems overwhelming. Trust me when I say that cloth diapering is so much easier than you think it is!

It Takes a Village and Ours Included a Night Nurse

Why Our Family is a Kindermusik Family