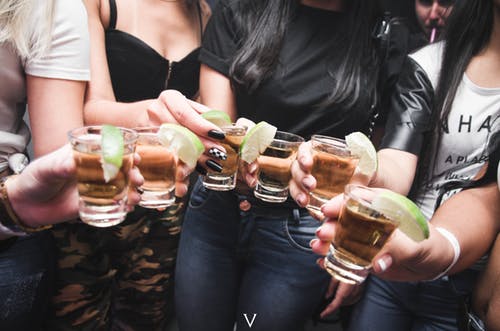 Let’s be honest, I wasn’t a saint in my youth. I see the shock register when I run into an acquaintance from my teens or twenties in the grocery store with a pregnant belly and a two year old. “Wow. Last time I saw you was…” Yup. Sure was. I’m sure there are plenty of old high school and college classmates who sit in stunned silence after running across my social media pages now filled exclusively with photos of my family and toddler smoothie recipes. My ten year college reunion is coming up, and I can only imagine the looks on people’s faces when I show up to the homecoming game with two kids in tow instead of two triple vodka waters (“with lemon” I would purr at the bartender). It’s true – double fisting now looks a lot like holding my son’s multiple drinks (“Mama, Reed wants water AND milk AND lemonade”) rather than my own. I’m sure if you’d told me ten or fifteen years ago that I would be married to my best guy friend and mother to his children, I would have laughed you off the F&M’s pool table. But you know what? Those days (and nights) spent looking for trouble prepared me in ways I never could have imagined.

Those first few weeks with a newborn can be brutal. Up all night, getting used to a new routine and a new member of your family leaves very little time for that all important friend: sleep. Turns out, when you spent a decade bar hopping until 4 am and then waking up for class or work it’s not that difficult to snap back into it. Call it muscle memory, call it sleep deprived delusion, all I know is that surviving off no sleep this time around didn’t seem so horrible. Also, I much preferred passing out in my baby’s nursery with a white noise machine on to in my bed fully clothed from the club spooning a Double Quarter Pounder.

We’ve all been there: your newly potty trained toddler has to go NOW and the only bathroom within range is the one at that sketchy gas station on the side of I-10 East. Well, can’t be worse than the bathroom at Snake and Jake’s Christmas Club Lounge so let’s drop trou, kid. And you know what’s way more manageable than holding your BFF’s hair back in a dive bar bathroom? Baby spit up. I will take baby spit up any day (or night) of the week over a roommate who just took her sixth tequila shot and tells you she “doesn’t feel good.”

My competitive nature came in handy during many a fraternity basement beer pong tournament. But just because the playing field looks different these days doesn’t mean I have to let my thirst for fun go unquenched. Want to build the highest tower using only triangle and circle blocks? I’m your girl. Need another human to throw your kid in the air ten times so you can take a breather? Look no further. And at pool parties you better believe I’m not one of the parents chilling on the side – I just cannon balled the crap out of every kid in the pool. Also, turns out all those years of sinking cups and double roll backs led to a natural affinity for creating fine motor skills challenges for my toddler. Sensory bins anyone?

I have no regrets. I don’t feel like I’m missing out if I stay home to put my little one to bed instead of meeting friends for drinks. I don’t wish I had spent a few more years “experimenting” or “being free” because let me tell you, been there done that and do not care to go back. Don’t get me wrong, the first few bars of Usher’s “Yeah!” still make me throw my hands up and start workin’ it – but have you heard “You’re Welcome” off the Moana soundtrack? Just sayin’…

Being a wild child was fun, but nothing compares to the transcendent joy my wild child brings to me. Getting all of that craziness out of my system left space for my real calling: motherhood. And that’s where I hope my true legacy lies.

Why That Cotton Bowl Win Hit So Hard

On the Outside Looking In: A Stay at Home Order When...