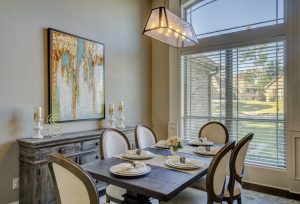 Growing up, we mostly went out to eat dinner every night. On nights when we would eat at home, it would usually be at the table or on TV trays watching the news or Wheel of Fortune. It honestly wasn’t my favorite thing to do, but it was what you were told to do so you did it.

I was hesitant to write this because I know for a fact that I am in the minority. We don’t sit at a table and eat dinner. *SHOCK* *SHAME* *BLASPHEMY* We are normally on the couch, on our phones, or watching TV while having dinner. Sometimes my son eats in his room and I sit in my office and finish work for the day. Are we any less of a family because we don’t sit around a table and eat? Absolutely not.

We still talk and have conversations; it is just not forced around a table while eating. We don’t have the awkward silence when topics run out. You can only “How was your day?” so many times. It is just me and my son, so our situation is a bit different I suppose. My son will tell me if he wants to eat together some days, and other days he would rather be in his room. Since he is a teenager, I totally understand this, I never wanted to leave my room. It was my safe space to relax and mentally deal with only what was in front of me. School was draining for me most days, so having to sit and talk about it was just added stress. Life is stressful enough, especially right now, so the space is needed on both ends.

While I find nothing wrong with sitting at a table and eating as a family, it is just something we don’t really do. My mentality is, if you do it this way, awesome, if you do it that way, cool. What works for one family may not work for another. Some don’t like to involve food in every aspect of family time, some find it the only time for family time. I think the world would be a much better place if people just let others do what works for them and they keep their judgment to themselves.

What a world it would be!

My Journey With Cancer :: Age is Just a Number, Baby