As a mother of 5, I’ve had 4 little ones, so far, play some sort of sport. This mostly came in the form of rec ball, but we’ve dabbled in a few camps as well. We’ve played basketball, soccer, baseball, and softball thus far. I’ve had children whom I’ve had to drag to the field to fulfill a commitment, and I’ve had children who I couldn’t get off the field to come home. I have been the mom on the sidelines whose child was benched and whose child was always in play. As a mother of both, I’ve learned a thing or two over the years of what my spectator’s role is in these sporting activities. But, one thing my role most certainly is not is another “coach.”

I’m not there to call plays; that’s the coach’s job. 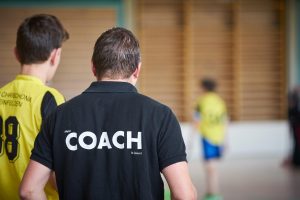 I will never forget the first time I brought my child to play in a soccer game. This was one of the loudest activities I have ever been a part of. I remember walking up to a game, and just seeing (and hearing) so many adults yelling, hollering, screaming at a field of tiny humans running amuck. It seemed as though everyone felt the need to yell, literally yell, to their child every single play. My very first thought was Is this for real? How on earth do these kids even hear the coach?! It’s enough for the little ones to have the pressure and the excitement of actually playing in the game; but, are these kids really blocking every single screaming adult out and focusing just on what the coach is saying?! How are these kids supposed to hear the plays and the suggestions from the actual coach if every single parent is also yelling what they think the next move should be?

I’ve seen this happen at my son’s baseball game just recently. A mother on the opposing team continued to yell to the outfielders what to do, where to make the next out, and where to stand. Isn’t that the coach’s job? Why didn’t this mother sign up to be a coach? What made it even worse, aside from the annoyance of sitting in the stands right beside her, was that she was incorrect in telling the kids where to make the next out. How are these aspiring little athletes supposed to learn if they have an entire sideline of “coaches” telling them multiple things all at once?

I’m not there to correct mistakes; that’s the coach’s job. 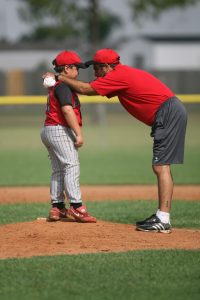 Though a mother is typically the default parent to fix all the mistakes, while in the middle of a sporting event, that’s not my job. My oldest did a 3 week sports camp when he was 4. The parents got to sit on the side and watch all of the skills they learned. This one mother continued to shout reminders and corrections to her 4yo the entire time. “Caleb! Run faster!” “Caleb! Pick up the ball, son!” “Caleb! What are you doing?!” I wondered what her purpose was. How did the constant shouting make Caleb feel? Also, why couldn’t one of the 3 coaches working with Caleb be the ones to gently remind the 4yo what to do? After all, they were standing right there talking to little Caleb. If we don’t give coaches a chance to do their job, the program nor the child will be successful.

My kids are always making mistakes during games. That’s kind of the point of all of this – to learn and do better. I don’t need to run over to the sidelines during a water break to tell him to straighten out his throw or possibly embarrass him shouting across the court what not to do. This is why coaches volunteer their time, to develop these kids’ skills. If you can’t trust a coach to do this for you, then maybe that’s a sign to volunteer your own time as a coach. But while in the stands, worrying about correcting mistakes made during a game takes the joy out of watching my child have fun.

I’m not there to question the official; that’s the coach’s job.

Nothing bothers me more than adults arguing at a little kids’ rec ball game. Officials are there to make judgement calls. This means that some of us will not like the call, but that’s ok! That’s part of the game. However, the minute I engage with an official, I take the focus away from the kids. Sporting events are about the players. It’s not about the parents. The only adults involved in the game should be the coaches I trust my child with and the officials to make the game happen – that’s it! What good comes from my interaction with an official? Has an umpire ever overturned a call after a mother expressed her dislike from the stands?! I can disagree with a call, but I don’t let it ruin what I came here to do, watch my kid have fun.

I am there to be Mom! 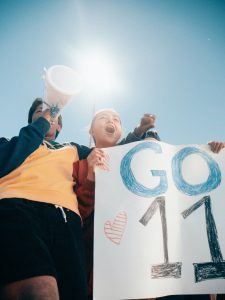 My only job at any game, is to be my kid’s biggest fan. I cheer, I support, I watch, and I have fun! Once you let go of the critiquing, the arguing, the reminding, the yelling – it’s a very enjoyable experience. As long as my kids know that I am there supporting them no matter how they play (or don’t get to play), that’s all that matters. Coach and mom, the two should remain separated. After all, I don’t expect the coach to wipe the snotty noses, order snacks from the concession stand, or bring them to the bathroom. I know my role at the sporting event, and it’s a pretty darn important one that has nothing to do with coaching.

The One Thing Every Mom of Young Kids Needs in Her...

Confessions of a Rookie Dance Mom