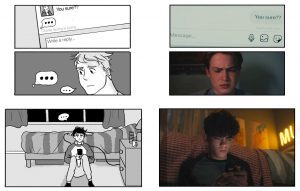 A few years ago, as I was idly trawling the Internet, I came across a webcomic called Heartstopper. I was immediately enthralled with the story, and every now and again, when I remembered, I would revisit it, catching up with the characters and their stories.

It had been a while since I’d last read it when I saw an announcement that Netflix was making a live-action version. I was cautiously excited. It’s hard enough to make beloved books into movies successfully, but a comic where you kind of knew what the characters were supposed to look like? Would they look the way the illustrated characters did?

Well, there was no need for me to worry. I downloaded the whole series to watch on a flight home the weekend it came out, and for the first time, wished I was on a longer flight.

So what is Heartstopper, and why was I, as a middle-aged mom, reading a book that was on my teenagers’ summer reading list? Well, I can’t answer the second question because I’ve enjoyed YA novels for years. But I can tell you what it is.

It’s a love story between Nick and Charlie, two teenage boys that live in an unnamed town somewhere in England. Charlie is an out, gay year 10 (what we’d call a freshman here) who, when we meet him, is in a hidden (and not very healthy) relationship with a guy named Ben. On the first day of their spring term, he is assigned to sit next to Nick, an ostensibly straight year 11 rugby player who befriends Charlie almost immediately.

It’s a story about friendship and tolerance and family and young love. You will fall in love with Nick and Charlie and their friends – Elle and Tao, Darcy and Tara. You’ll scowl when Harry and his cronies come on screen. In any case, you won’t be able to wipe the smile off your face for the first several episodes (there are 8, lasting around 25 minutes each.)

So you might be wondering what age this is geared towards, aside from 47? Certainly, my 14-year-old sons enjoyed it, one of whom, who is not a reader, devoured the books (there are four, though the series generally covers the first two books, so unless you want spoilers for the upcoming seasons, you might want to stick to those two volumes.) I would recommend reading the comic before watching the show if only so you can marvel at what a great job they did at casting everyone, particularly the two leads. 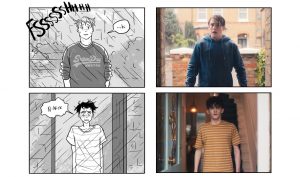 Netflix rates the show for 14 and up, and that seems realistic. There are some instances of homophobia and the usual kind of teen angst (but nothing like Euphoria.) There’s some bullying and one instance of assault. There’s discussion of love lives and sexuality, and if your kids don’t like watching kissing scenes with you, then, well, you might want to watch it separately.

I’ve read so many stories and tweets about kids who have come out to their families after watching this show or reading the books. Once you see the scenes between Charlie and his big sister Tori and Nick and his mother, you’ll understand why it’s made kids feel safe and accepted.

In any case, the way Schitt’s Creek was the balm we all needed during the worst part of the pandemic, Heartstopper will likewise leave you with a heart full of joy, whether you read it or watch it.

You can read the comic online for free at https://tapas.io/series/Heartstopper or buy the books on Amazon here. The show is on Netflix. 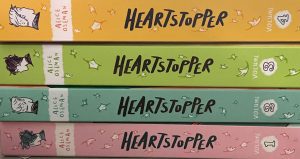 A Commute of Ten Feet: Working From Home