Hi, I’m Joey and I am a lifelong boy band fan.

It started with New Kids on the Block when I was about 6 years old and continued during high school when *NSYNC and Backstreet Boys were hitting their peaks. So when my childhood best friend, who’d obsessed over NKOTB with me when we were little, asked me last fall if I wanted to go to the New Kids on the Block’s Mixtape Tour concert in the spring, it was a no brainer. OF COURSE I wanted to go!

I was 8 years old when I saw them in concert for the first time. It was my very first concert and I’d gotten the tickets for my birthday the month before. Each year, my parents would send me on a birthday “hunt” with clues hidden around the house leading to my big gift – and I vividly remember that year, the envelope holding those tickets was in the breadbox. I looked forward to that concert for weeks! I daydreamed of how Jordan Knight would spot me in the crowd and single me out to come on stage to serenade me with “I’ll Be Loving You Forever.” While the actual concert played out slightly differently for me, I still remember seeing them live on stage because it felt *that* magical to me.

And who couldn’t use a little magic these days?

I’m 39, turning the big 4-0 in about 2 months. But I’m in a slightly different season of life than most 40-year-olds I know: I’m currently pregnant, my third baby in as many years. My days are spent navigating the high-needs life stages of my very active 2-year-old and 1-year-old. So it probably goes without saying that I’m… a little tired.

There was a time – not all that long ago, actually – when I would’ve gone *all out* costuming for an event like this. One of my greatest passions in life is going all in when planning a costume or party on a theme. But being in this season of life when I’m constantly pulled in different directions and often feeling like I’m doggy paddling just to keep my head above water meant that it was the morning of the concert and I didn’t have so much as a fluorescent bangle bracelet to wear.

Well, that’s not entirely true. One of the friends I was going with had made us matching New Kids on the Block t-shirts. Mine was slightly different though – it said “New Kid on the Block” and had an arrow pointing to my baby bump. (And, as you’d imagine, it was a big hit the night of the concert!) But I was going to the concert in a matter of hours and felt woefully unprepared. 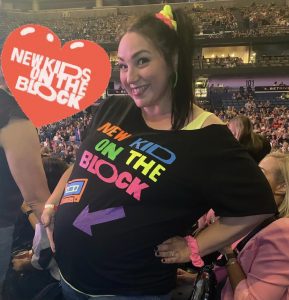 In a text to my husband on my way to work that morning, I actually lamented that I felt a little bit sad that the “lover of a good over-the-top theme” version of me was perhaps gone for good. To call it an identity crisis is definitely an exaggeration, but I did feel a bit out of my element realizing that my days of dedicating so much time and energy to “silly” things were behind me because so much more important things come first these days. He told me that he was sure that version of myself wasn’t gone for good, it was just on the back burner until our kids were a little less needy.

And I knew immediately that he was right.

I stopped at Target after work in a slight panic to see what I could get to fix my look before I met my friends to head to the show. As luck would have it, the ‘90s are back in full force lately, so I snatched up a pack of fluorescent scrunchies and some very purple eyeliner. A few minutes in the Target parking lot and my side pony and I were surprisingly concert-ready.

The dinner and ride downtown were full of laughter (and cocktails for those of us who aren’t pregnant) and the feeling of just walking into the arena was electric. I’m sure part of the reason was because it’s the first real large-scale event I’ve attended since Covid, but it was amazing to feel that energy again. The arena was full of ‘90s music and looks and just felt… joyful.

It briefly occurred to me that I hadn’t brushed up on my New Kids catalog and maybe wouldn’t be in my best sing-along form, but I was utterly amazed at how easily most lyrics just came flooding back to me. At one point, the guys spread out at various stations in the audience so that Donnie was about 3 rows in front of me and Jordan was maybe 20 yards away. It was wild how close they were! I took a video in selfie mode of my reaction to them being so close and it makes me giggle because I’m just in such disbelief. Later in the evening, a fan nearby managed to get her cell phone into Donnie’s hands and he took a selfie with the crowd – that I can clearly see myself in. (Fun Fact: Earlier today, Donnie’s official Instagram account liked my friend’s post of the pic. Swoon!)

The men on stage may be in their 40s and 50s now, but they still put on one hell of a show. And, man, do they know how to cater to their audience! At one point, Donnie Wahlberg joked about how, at 52, his body is still pretty great but his eyesight sucks. This was also around the same time a pair of panties was flung onto the stage and he scooped them up, blushing. Ha! These men are living the life! And the crowd goes wild because there’s something amazing about returning to a time in your life when all that mattered was the feeling you got from cassette tapes in boom boxes.

The best way I can describe it is as a “nostalgia high.” Its energy is exhilarating, and its familiarity is comforting at the same time. I think it’s why dancing to songs like “Get It Ready” brings women our age such joy.

Last night, I joked that the real “Hangin’ Tough” of the evening was whether I’d be able to stay up past 10:00, but the exhaustion today was worth it. For a few hours, I wasn’t just the mom version of myself or even the 39-year-old version, really. I was just… me.

And I didn’t realize how much I needed that.

I Don’t Have COVID-19, But I Think It’s Making Me Sick