When it comes to the world of Legos, I’ll admit, we’re kind of amateurs. Sometimes, during a casual Pinterest scroll, I’ll see images of immaculate Lego tables, color-coded storage systems, or specialized shelving units to display builds. If Legos were my hobby, and I had an excess of free time in my life, that’s how I think I’d like to arrange it all, but as it stands, that’s not where we’re at.

Right now, my five-year-old son is kindling a small obsession with Legos. And somewhere along the way, it transformed the way he likes to play.

Prior to having Legos in our life, the way he played was primarily setting up scenes for his toys that no one was allowed to touch. He has an elaborate wooden train track system with which he loves to build fascinating and complex tracks. Then, he sets up his train cars on them just so and leaves them for days without touching them. He doesn’t want to drive the trains on the track. He has set his perfect scene, and there it must stay.

His first interest in Legos was with the kits, especially the trucks. He and his dad would read the instructions and put together the trucks brick by brick. When the kits were complete, he would line his little masterpieces up on his bookshelf, out of his younger brother’s reach. He had an ice cream truck, a bulldozer, a helicopter, a couple of different fire trucks, and some others, all carefully displayed. Every once in a while he might take one down and arrange it into his train track scene, but they weren’t for playing.

Eventually, he moved his collection into a clear plastic container with a lid to better protect them from his brother, and when he wanted to admire them more closely, he took them out, lined them up, and gazed upon his handiwork.

I don’t know how it happened, but over time, as his “loose Lego” collection grew, he started borrowing pieces from his kit builds. We always tried to put them back together after he was finished playing, but eventually, the carefully built trucks were so mixed up, I couldn’t help him put them back together. I was certain this would lead to meltdowns, but it turned out, he had found a new way to play. 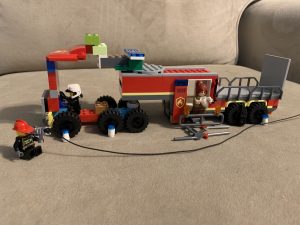 He now designs and builds elaborate towers and towns, populating them with Frankenstein-style vehicles and other items of his own creation. He breaks apart one truck to build another and adds random pieces here and there. The careful construction and preservation of his builds is no more. My particular, picky, “everything in its place” boy who loves structure and routine had softened a little, playing and not caring that things were not just so. At the end of play, the various pieces all get tossed into a giant container with no sorting, ready for another day of imaginative creating. 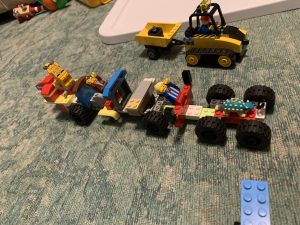 I’m a firm believer that play is the work of childhood, and seeing this new side of him shows me a tremendous amount of growth. I love to watch his new love for Legos blossom as he shakes off his rigidity and stretches his creativity. We may have the floor covered in dagger-like Legos now, and I may curse their existence every time I step on one, but brick by brick, my kid is growing and learning, and for that, I love them.