All last week, it was all I could do to contain my excitement for Sunday. By Sunday morning the emotions were almost palpable. My kids and I danced to Choppa all morning until it was time to head to the Dome.

I have been fortunate enough to attend a decent number of Saints games. It’s hard to recall a recent time the crowd outside the Dome as electric as it was Sunday. We had to wait in a fairly long security line to get in, and during that half an hour, I think at least half a dozen times the line broke into a spontaneous Who Dat chant. 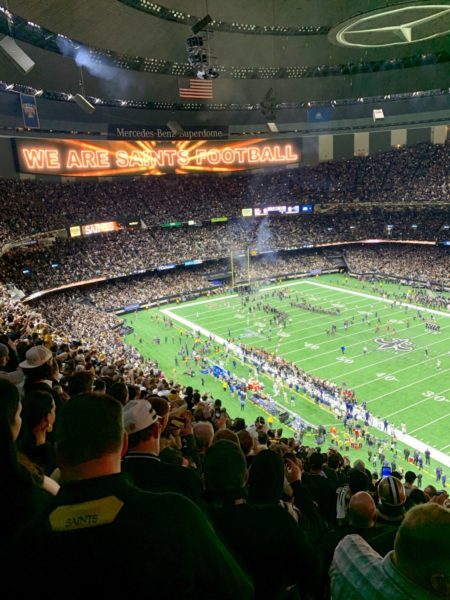 The only comparable juxtaposition of emotions from the start of the day to the end of the day, would be how last season ended. But even this was way different. Last season, it was 100% on us. It was a mistake. But this, it was grossly unfair. When the flag never came, everyone around me was so visibly and audibly angry. Then when the game was over, I was also very upset with the outcome but my immediate attention turned to my 2 young children I had taken to the game solo while my husband was at work. I did briefly worry about us getting out. I knew people were rightfully very angry and when you’re that angry, you’re not always acting in the most rational ways. But instead, everyone just walked out with their shoulders slumped and heads hung.

When we got outside, there were no riots or angry mobs, just a sad congregation of black and gold.

We can’t control how we feel. We have every right to be pissed. A Super Bowl appearance was stolen from us. It was stolen from our boys who truly deserved to go. The energy around NOLA the last 2 weeks has been pure fun. One no call sucked all the fun out of our city, and it just plain sucks. But instead of rampaging, we have been lifting each other up. We still thanked our players and comforted one another. Even in the serious injustice of the no call and the less than satisfying response from the NFL office, the love we have for our city and for our players and for one another will not be hampered by some blind / biased referee.

I’m proud of you NOLA. You’ve taken your sadness and your anger and instead of anarchy, we’ve held our heads high and harnessed our energy into some truly awesome clap backs. What other city would give you referee voodoo dolls, anti ref cookies, doctors offering free eye exams for refs and billboards all around the Super Bowl host city? No other city, that’s who.

So yes they took away a Super Bowl appearance from us, but they cannot take our city away from us, or our love for our boys and they sure as heck won’t be taking Mardi Gras.

Bath Time is His Deal

Is Together Forever Possible?