As a mother, teacher, and proud New Orleanian, I am writing this letter as a heartfelt thank you for an incredible 21-22 season. You inspired our entire city, taught my students and children the power of triumph over adversity, and you showed both vulnerability and poise as young men, many just a few years out of college. 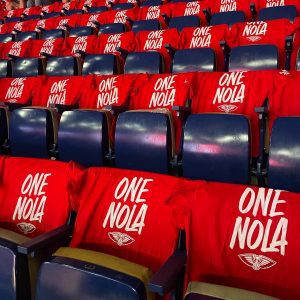 To most NBA basketball fans at the beginning of this season, you were the team that couldn’t. You began the season with a 1-12 record that gradually improved to 3-16. Your celebrated top player and 2019 number 1 draft pick, Zion Williamson, sat benched and injured. Most people had never heard of most of your starting players (except possibly All-Star Brandon Ingram). Everyone watched and waited for you to continue failing.

Instead, you defied and exceeded expectations. With the help of first year head coach Willie Green and a true New Orleans-inspired “Won’t Bow Down” true-grit mentality, you started to turn things around, earning a record of 33-30 for the rest of the regular season, beating the Los Angeles Lakers (where former Pelican Anthony Davis was traded in 2019) every time (both home and away).

In February, you gained the leadership of point guard CJ McCollum from the Portland Trailblazers, through a last minute trade. As one of the senior members of the young Pelicans team, McCollum quickly expressed his commitment to and love for the city of New Orleans, taking talented rookies such as forward Herb Jones and point guard Jose Alvarado, under this wing.

You finished the season with 36 wins and 46 losses, just 10 games shy of the .500 benchmark, but still squeaked your way into the postseason, winning both play-in tournament games (at home against the San Antonio Spurs and away against the LA Clippers) in 3 days. Despite all the odds, you became the first team to qualify for the postseason with a 36-46 record since the Boston Celtics in 2004.

As the eighth seed in round 1 of the playoffs, you faced the first seed Phoenix Suns, who finished this season 64-18, eight games ahead of the second seed. Everyone expected it this round 1 series to be a 4-0 sweep (with an easy Suns victory), but again, you beat the odds.

Playing game 1 of the playoffs against the Suns in Phoenix just 2 days after winning the Play-in game against the Clippers, you lost by 11 points. But in game 2 (away again at Phoenix) you fought tooth and nail, shocking all naysayers with a sizable 125-114 win. Prior to the first home game of the series (game 3) on Friday April 22, I organized a “Pelicans Spirit Krewe” at my school to encourage students and staff to wear team colors (blue, gold, and red) for the first home game. Many students, born and raised in this black-and-gold, Saints football-obsessed city, had no idea what the Pelicans colors were. Together we cheered “Goooo Pelicans” and flapped like the Louisiana state bird and your mascot, sending good vibes to you at morning assembly.

Thanks to you, New Orleans is now also a basketball city. Even though you just barely lost game 3 at home, the energy inside the Smoothie King Center (“The Blender”) was truly electrifying; the sold-out crowd wore red “One Nola” shirts and screamed in unison. During Game 4, which we won 118-103, the crowd wore red “You Gotta Fight” shirts, a quote from Coach Green. And on Game 6, our last of the series and at home, the red shirts said: “NOLA vs. Everybody.”

Truly the season has been the Pelicans vs. Everybody. The playoff series ended 4-2 when everyone predicted 4-0, a bittersweet end to a season where you lost 16 of your first 20 games, somehow barely winning a few clutch games in the play-in tournament and then rallying hard against the best team in the NBA in round 1 of the playoffs. In the playoffs, you were the uninvited guest who crashed the wedding and ended up taking over the dance floor for a short while. The Pelicans this season were David; the Phoenix Suns: Goliath.

The Suns ultimately took the series after game 6 due to Chris Paul’s record-setting 33 point game (where he didn’t miss a single field goal or free throw). Paul (“CP3”) played for the New Orleans Hornets for years just before and after Hurricane Katrina, leading his team to the playoffs several times. Coach Green and Paul are best friends, having both played together on the court for the Hornets; Green was also an assistant coach for the Suns for 2 years before coming to New Orleans. Green tearfully embraced Suns coach Monty Williams as the Pels marathon season came to end after Game 6. Williams wiped his tears. It was a moment I truly celebrated as the mother of a teenage son: two grown men showing vulnerability and true emotion in front of millions.

Other players teared up too: Jose Alvarado and Brandon Ingram both tearfully told reporters they wished they could go back to work tomorrow (continuing in the playoffs postseason). New Orleans was quick to show them love: “The future is incredibly bright”; “Not the end, only the beginning”; “Seeing Willie Green cry made me tear up/I love this team, man!” were just some of the comments on local Pelicans social media pages.

And of course, “Nola vs. Everybody.”

Nobody gets behind an underdog team like an underdog city. At times it seems like everything is against New Orleans: hurricanes, tornadoes, crime, economic hardship, wetlands erosion, and losing sports teams, to name just a few catastrophes. The 2022 U.S. & World News Report ranked Louisiana as the worst state to live in, and New Orleans would seemingly take the crown, as our state’s most populated city. But we continue to defy our doubters, the unbelievers, just like the Pelicans do. We know what it means to be truly tenacious, to claw our way through hardship and the indignity of low expectations. And we sure know how to celebrate when we come out winners, again and again. 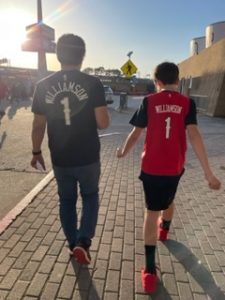 Pelicans, even though your season is over, your story is just beginning. Sportscasters and social media sites are already predicting how far you’ll succeed next year, what your starting rotation might look like, and how much more crowded and loud “The Blender” will be from now on. Thank you for refusing to bow down, for reminding all of us of the meaning of true resilience, and for re-energizing the vivacious spirit of our New Orleans community. October, and the start of next basketball season, is just a few months away.