What happens after we move on from this life? It is a topic that is often explored and debated, but the fact of the matter is that no one walking this Earth has a definitive answer. I have always had an interest in the after-life which started as a young child reading ghost stories and watching “Unsolved Mysteries.” At LSU my friends thought I was crazy when I enrolled in a senior-level class called “The Sociology of Death & Dying.” Still, one of the most memorable classes that I walked away feeling enlightened. My interest has only grown in my adult life, and I still love anything to do with the paranormal. Things like near-death experiences (Surviving Death on Netflix is so interesting) have always made me wonder: what really does happen?

My mom passed away from cancer ten years ago at the young age of 51. I was a new mom when it happened, and it took me years to start even processing her death. There were unfortunately things that I felt were left unsaid, and there were some situations surrounding her passing that really weighed heavily on me. I walked around living with regret and sadness that I just couldn’t shake. I went to a group medium reading with a friend of mine who had also lost her mother. Nothing happened for me that night to rave about, but my interest peaked and I was desperate to try pretty much anything at that point.

I decided if I was going to go, I wanted the most credible I could find so I set to the internet for research. Luckily living in New Orleans, I didn’t have to go far, we have one of the best right here in our city – Cari Roy. I searched the internet high and low for negative reviews but was pressed to find anything bad about her during her 30-year career. She’s been on numerous tv shows and called in on investigations. I went ahead and emailed to book the appointment. They got back to me rather quickly and I was able to grab an hour-long spot on the fourth anniversary of my mom’s passing.

On the day of the appointment, I was a ball of nerves. I put on one of my mom’s rings as they say to bring an object of the person that you are trying to connect with you. I drove downtown to Gravier and anxiously rode the elevator up to a professional office building. After a brief wait, I was brought into Ms. Roy’s office which was very pretty and was a far leap from the incense-filled, dark room I had envisioned in my head. She asked me my first name, calmed my nerves some, and then held my hands in hers.

The next hour changed me as a person. Alright, I know you are thinking “Well isn’t that dramatic?!” but I promise you I am not exaggerating. These are the most important points that have stuck with me. I have a terrible memory and this hour is still crystal clear to me.

What happens when we die?

One of the things Ms. Roy explained to me was what she feels happens when we die. She told me that when we pass on to the next life, we don’t sit around and think about all the things that were wrong in this life. We don’t ponder our death or mourn, we move on. Her description was that once we are there, looking at our loved ones is like going to the movie theater. You get to go to the theater and look in on who you want to that day, and one day your loved one will be sitting next to you in the theater as well as if no time had passed. Time is a man-made construct and does not translate past this life.

Why can’t everyone communicate with those who have passed?

We as humans can only expand our minds so far. She explained to me that this life and the next are moving parallel to one another and that we are not meant to understand. We are not meant to understand because life would be harder if we did. Sometimes those two paths collide, and those are the moments that make us take notice. There are no coincidences and mistakes, there are only signs and communication from our loved ones when our hearts and minds are open to them. We are given enough to make life livable, if you were inundated with things from the people we miss you wouldn’t be able to live a normal existence.

She talked about my mom, my grandmother, and other family members that had passed. The details she knew, the information that she shared with me (some of which I didn’t even know and was later confirmed by my Aunt), is NOT public information. It is not on record, not on Google, not searchable. Specifics about my mom’s illness and family secrets are not things floating around the web for anyone to find. I was close to Ryan’s Grandma Eunice and she made her presence known as well which made me so happy. 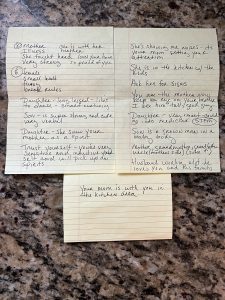 She talked about my husband, my kids, and our life as well. Again, the amount of detail was just mind-blowing. Looking back 6 years later, the information she gave me about my kids is exactly what she said would be. Rex was just a baby at that time, how she pegged his personality now still blows my mind. Mila is exactly who she said she would be, right down to her interests and ambitions. Ryan had just started his business a few months before that which she said would be successful.

And my mom. I can only believe she was there that day. Both of my biggest fears / regrets were specifically addressed. I always worried my mom didn’t know I was by her side. That woman grabbed my hands, looked me in the eyes, and said “She said she KNOWS you were there. She knows you were there so please stop worrying about it.” She also told me to stop worrying so much that I was going to die young too because she did not see that for me. I cry as I write this because the emotion I felt hearing those words is indescribable. Things that maybe only my husband and best friends knew, the things that kept me up at night and my heart hurting. As we said our goodbyes that day she looked at me and said “Sweetheart, at four years your healing begins.” Well, remember what I said right, it was my mom’s fourth anniversary that day. I took the notes she had written me and went on my way.

I drove home that day in silence but with a lightness in me I hadn’t felt in ages. Cari Roy gave me the peace I needed. It is something that I still don’t truly understand. I went in skeptical but open; I figured I would get some vague information and it would be a good story. While I still consider it a good story, it still has so much more to me. It was healing and transformative, it gave me a different outlook on not only the afterlife but this life as well. I shared what happened openly with my Facebook friends, and I have had a slew of them go. They have all come back to me to share their experiences as well and they are nothing short of amazing.

I know there are skeptics reading this right now, and hey – I feel you. I think being skeptical of anything that we can’t prove is fair. I also think that there are plenty of people out there calling themselves a medium or clairvoyant that take advantage of the heartbreak surrounding a loved one’s death. If this is something that you choose to do, take the time to research it if you want to get the most out of the experience. And I hope if you do you walk away feeling the same way I did.

5 Stars for Mean Girls on Broadway {But Make Sure You...