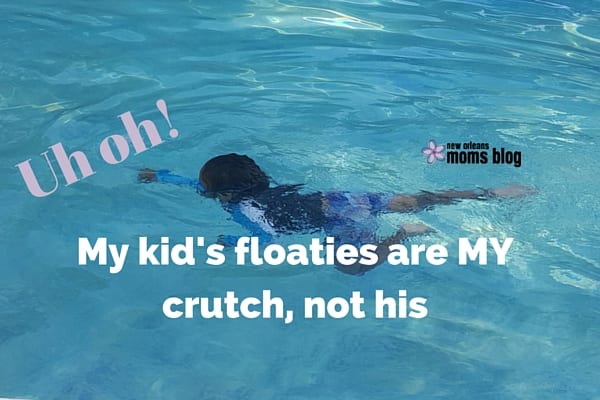 I am not at home in the water. Fear still gets me every time I think about putting my face in the water, so mostly I just don’t.

My parents can’t swim, just one of the many ongoing gifts of separate but equal. So my childhood wasn’t one of hanging out at the pool. It was very important to them that I learn to swim, not for recreation, but survival.

Like many things, my husband’s experience was very different. I have gone canoeing with my in-laws for years now. With them, the water is a fun, freeing, gathering place. Though I look forward to our river trips, I spend a lot of time on sand banks.

I want my kids to be more like my husband. I want them to love to swim, so we did baby and me swim classes and spent many afternoons in the pool. My son has loved water his whole life. Now he’s getting big, and it’s time to let the floaties go. I didn’t realize how much of a crutch they were for me.

Swim lessons can be a transformative time.

In just a few short lessons, many kids go from crying over a few drops of water on their face to legit swimming. So much fear readily on display. Yet most manage to press on even as they tremble crab-walking to the deep end or have to stand up and take a breath every five inches to “swim” two feet.

Watching my son’s confidence and skills grow awoke all sorts of pride and anxiety that collided when one day my son scraped his foot on the wall when he hesitated during a jump. He was no longer afraid of going under, but his remaining fears were hobbling him. So that evening, he and I went to practice jumps and swimming to safety at our gym’s pool. Its shallow end goes over my son’s head. Since he couldn’t touch the bottom, he protested loudly that he wanted floaties.

For a moment, I thought about waiting until he was more ready, but he was ready. You can be afraid and ready at the same time. It’s not about not having fear, it’s about not letting that fear hold you back. So there we both were, out of our comfort zones.

I reminded him that he said he wanted to jump off the diving board at his swim lessons, but only kids who could jump off the side by themselves were allowed to use the board. We went back to work, and he jumped clutching my hands.

At lessons the following morning, he jumped holding onto his teacher’s hand. Then that night at practice, he declared he was going to jump in all by himself. After a few moments of hesitation, he jumped and squealed, climbed out, and jumped again and again.

I became progressively less excited as all 5’1″ of me had to stand in that 4′ water with cannonball wave after cannonball wave washing over me. As if that wasn’t bad enough, he insisted we play “Ring around the Roses” and wave to each other under the water like they do during lessons. Since I was already dripping wet from the jumps, I agreed.

As the water rushed over my head, that familiar fear gripped me.

I probably assisted him to the surface too quickly. I kept cheering him on because he was just where I wanted him to be, at home in the water. So I went under again and again.

On our way back to the car, I told him I was proud of him for having such a good practice. He said, “I’m proud of you too, Mommy. You went under the water like me! It wasn’t scary, was it?”

This kid. Still, I must not have done too badly because on the last day of class, he jumped off that diving board with only his brave little four-year-old self, no floaties or hands required. 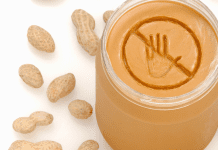 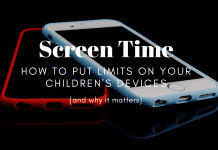 Roller Coasters, Sharks, Waffles and Other Reasons for a Family Trip...