When Jane was one we gave her peanut butter for the first time. At that time, doctors were still advising parents to wait until one to introduce allergens. The first time we gave her peanut butter she was fine. The second time, she broke out in hives. We called the pediatrician and he advised us to give her Benadryl and wait. He said if she was going to go into anaphylaxis it would have happened by now. Sure enough, she was fine. The Benadryl worked and we made an appointment with the allergist. He did a skin test on her for allergies to peanuts and most tree nuts, including pecans, cashews, walnuts, and almonds. The only one that came back positive was peanuts. We were given an epi pen prescription, told to give her Benadryl if it even happened again, and to avoid peanuts.

We went on with our lives. We never really took the allergy seriously. Everything was fine. She was fine. We would tell people to give her Benadryl if she ever got hives and that they would never need to use the epi pen.

We avoided peanuts, as directed, but we gave her other nuts.

We had a wonderful story time. Jane loved that I was there and I loved being there with her. We began to eat lunch, and Jane wanted to taste my cashew butter sandwich. I can still see her sweet little face leaning in to take a bite. Neither of us knowing that in that moment everything would change for us. That we were about to experience the most terrifying day of our lives. Some times I go back to that day, to before I gave her the sandwich, I wonder how differently it all would have been had I sent the cashew butter the day before. How Jane probably would have died. I try not to think about it, but at night or during the quite times of the day, I can’t help it. My mind almost forces me to think about it and it is horrible. I have to always remind myself that it didn’t happen that way and that I was there and that she survived.

Within a few seconds of giving her a bite of the sandwich, something about Jane changed. 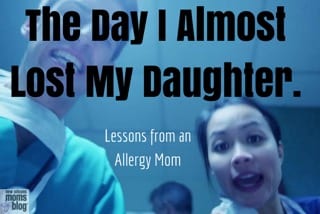 It was subtle. She didn’t look like she was in distress, she just looked different. It was her eyes. She looked afraid. She was only 3. Her teachers said she must be getting sick and mentioned that some of the kids in the class had recently been ill. I looked for hives, but didn’t see any. I just couldn’t shake the feeling that something was wrong. She wouldn’t open her mouth. She also started to cough … just a little bit. It was subtle. Everything was subtle. Her teacher took her to get some water at the fountain down the hall. I remember sitting there nervous, unable to shake the feeling that something wasn’t right. Little did I know that she was in full blown anaphylaxis. My daughter was dying and no one knew it. Thankfully, I listened to my instincts and took her to the nurse’s office.

The nurse asked me if she had had any peanut butter. I said no. She administered Benadryl and Jane immediately threw up. The nurse told me to get my car because we were taking Jane to the hospital. I can still see myself running to my car. I was confused. I really couldn’t process what was happening. I couldn’t believe or connect with the fact that my daughter might be in real danger. It all seemed crazy. I remember actually feeling foolish for running, but somehow knowing I needed to run. I pulled the car up to the doors of the school. Looking back, I know we should have handled it differently. We should have administered the epi pen and called 911. We just didn’t know what was happening. This was a first-time reaction. She had tested negative for a cashew allergy just two short years before.

She didn’t look the way I thought a person in anaphylaxis would look. I missed it.

We got to the hospital within a few minutes. By the time I jumped out of the car in the emergency lane and grabbed my beautiful, sweet, blond, wavy-haired daughter out of the backseat, she was covered in hives. Little did I know she was also barely breathing. I remember thinking this was still all a mistake and that the doctors would tell me that she was fine. As the emergency room doors opened, I felt the blast of cold air. The air made me aware of the tears on my face. I hadn’t noticed them before. I turned the corner and saw the check in area. I debated for a second whether I should patiently wait my turn or run in front of the people waiting. Crazy, I know, but it’s what I thought. I decided to run. Some part of me pushed through the denial and knew that I couldn’t wait, that Jane couldn’t wait. I ran straight to the nurse at check-in. I remember loudly and firmly stating, “I think my daughter is having an allergic reaction and is having trouble breathing.”

The nurse jumped right up and took us to the back. She approached the first doctor she saw. She told him something. I was in a fog and have no idea what she said, but the doctor immediately listened to Jane’s chest. It was at this moment when he listened to her chest and looked up into my eyes that I knew. I knew any hope I had that this was nothing was gone. I knew Jane was in anaphylaxis. I remember him grabbing her from my arms and running to a room screaming, “Call pulmonary! We need epinephrine!” and a million other things I didn’t understand. Within seconds Jane was laying on a table and every doctor in that emergency room was working to save my beautiful baby. I turned to one of the doctors standing over Jane and I asked, through uncontrollable tears, if she was going to be okay?

I will never forget what he said to me: “We will do everything we can.”

Those words broke me. In that moment, I felt my heart, my entire body, burn with the deepest dread and sadness and fear and longing and regret and love that I could have ever imagined possible. My beautiful, funny, bright baby girl was dying and all I could do was sob, begging the doctors to save her.

We were fortunate that day. Jane survived.

The epinephrine worked and after spending some time in the hospital we were able to take our baby home. Before we left, the doctor approached me and told me that had we gotten to the hospital even a minute later Jane would likely have died.

I learned so much after that terrible day and I am desperate to share what I know with anyone who is willing to listen with the hope that I can spread awareness of the dangers these allergies pose. I have learned that anaphylaxis doesn’t always look the way you think it will look. Sometimes it’s as simple as a cough or drop in blood pressure. I learned that most people, including parents and teachers, need better training to identify anaphylaxis. Jane’s teacher later told me that had I not been there they might have let her rest. She would have died. I learned that you can develop an allergy at any time. I learned that people think it is dangerous to administer epinephrine. This is incorrect. Epinephrine is safe. It is better to administer epinephrine unnecessarily then to fail to administer it timely. I also learned that epinephrine doesn’t always work. That you can give epinephrine timely and even administer it multiple times, but the body just doesn’t respond and the child dies anyway. Thankfully, Jane responded to treatment.

It could have been different.

For some, it has been different. The only way I can keep my child safe is though strict avoidance. I do not wish to make the lives of other kids and parents more difficult, but I am compelled to push for nut–free schools and allergy awareness, because I am afraid of losing my daughter.

I am asking you to look at your child or someone you love and imagine they were in that emergency room that day and that you had to look into their eyes as they lay on the table dying and think about what you would do to keep them safe. Please consider doing what you can to help my Jane and all the kids like her. I am asking you to be supportive of all people with life-threatening allergies. To ask questions and read labels. I am asking you to help make school lunches, birthday parties, holiday parties, class parties, Halloween, and all the other events surrounding food safe for kids like Jane.

I made a lot of mistakes that day, and I will have to live with the shame of those mistakes for the rest of my life. The only thing that I can do to try to make up for those mistakes is to keep fighting to make Jane’s world a little safer. I just can’t do it alone. 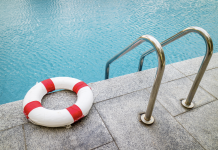 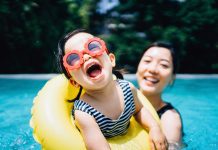 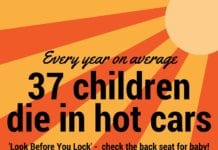