It was a quiet evening. I was sitting in the living room, on the sofa, writing a post on my laptop. My 1-year-old daughter was sleeping in our bedroom because she had a cough keeping her up at night. My husband was folding some clothes in the kitchen. All of a sudden, I heard a loud noise and a piece of wall fell on my cheek. A cloud of white dust formed in the room. I looked up a saw a hole and a smear on the wall. I thought – what just happened?

My husband ran in and screamed “It’s a gunshot! Get down, Marie, get down!” My heart started racing as I threw myself on the floor and crawled to my baby’s bed. She was sleeping peacefully (How is it possible she didn’t hear anything? I will never know.) I had grabbed my phone and immediately called 911. Half crying and breathing heavily, I told them that a gunshot had gone through our house and I didn’t know where it came from. No, nobody was injured. No, I hadn’t heard any other shot. The operator assured me that somebody would quickly be dispatched. I laid on the cold tile by my daughter and cried silently. This was surreal. Didn’t it just happen in movies or novels? Who had shot a gun at us? It had been fired right through the house. I immediately thought about the past week’s events: I had already called 911 twice to report a guy driving very slowly around the neighborhood, windows rolled down, and looking around (and at kids in the local park, which had prompted my calls). Did he know it was me? Was he shooting at me? Was he waiting for me out there? Where was the police? 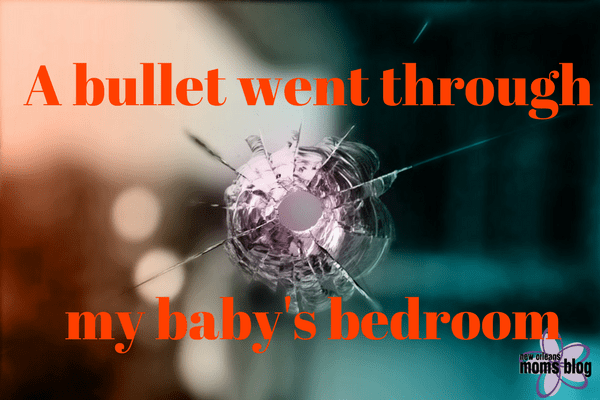 Where did it come from???

We lived in a double at the time; my neighbor came by and told us he was responsible for the incident. He explained that he was using his staple gun and that the staple had gone right through his wall and perforated it to enter our house. I felt relieved to know that there wasn’t a weirdo outside shooting at us or a gang using Lakeview as their new playground. But at the same time, I didn’t buy it. I mean – how can a staple go through two walls? As I walked around the house, I noticed that the shot had gone through the wall separating the two units, my living room wall, and had finished its course in my daughter’s bedroom. Thank God she slept in our room that night. It seemed that the … staple (???) had gotten stuck inside the bedroom wall. The neighbor told us he would immediately come and patch the wall. I told him I had called the police and I wanted them to assess. He left.

When the police arrived eight minutes after the call, the officer explained that the neighbor had already explained everything to him and that it was an accident. Naïvely, I asked the officer how a staple could have gone through all these walls. He looked at me with a weird expression and laughed. “Madam, it wasn’t a staple gun! It was a semi-automatic weapon.”

OH HELL NO. I told the officer that the guy had said he was using his staple gun. My husband confirmed. The officer said “I’ll be right back.” By that, he meant that we would see four more officers and two detectives. The neighbor had obviously lied and they had to figure out why; they also had to do a full report. They took it very seriously and for four hours, we repeated the same story over and over. Pictures were taken. The media showed up outside. The detectives explained to us that the guy had a permit to own a gun and that the gun was brand new. He was cleaning it and it had discharged. We had no reason to believe he would shoot intentionally, but his gun was confiscated until further notice, which gave me great relief. Later that night, he came to apologize and said he had gotten scared, and that’s why he had lied. I was angry, confused, and shaken. The shot could have killed one of us. How can one be so careless?

This Mom’s Plea for Safety

As I reflect on that night, I have realized two things. The first is that regardless how many guns and weapons I could have had in my house to defend myself, NOTHING could have protected my family from the shot. It was a freak accident, but owning more guns than the guy could not have helped me in any way. The second is that if one does own a gun/weapon, the only way to protect oneself is to have the gun out of reach. Weapons need to be locked up. Accidents happen all the time. Between 2005 and 2010, 1,300 kids under 25 were victims of accidental shootings. We all hear it on the news, but it happened to me right here in Lakeview. One of us could have been injured. As parents, we don’t let our kids play with kitchen knives. We push them away from the stove to prevent them from getting burned; we hold their hand to cross the street to protect them from cars. Let’s ensure our kids’ safety at all times.

Ambushes in the Way of a Lady in Labor in NOLA