The subject of the Messenger Kids app came up in a conversation with friends recently, and one of them said, “Facebook for my kids? No way.” I suspect a lot of parents have the same reaction when they learn about the Messenger Kids app, but I’m here to set everyone’s minds at ease. By way of background, I am mom to triplet 12 year old boys, so the days of entirely limiting their access to technology are pretty much gone.

While Messenger Kids IS a free app offered by Facebook, it is NOT Facebook as you or I may know it; it is, in short, a messaging app through which children can communicate. Messenger Kids does not give your kids access to Facebook, so you don’t have to worry about them seeing that you posted a picture of them picking their nose or whatever. (I mean, of course you wouldn’t do that anyway. Gee whiz, I certainly never would post an embarrassing picture of my kids, nope, never.)

But you also don’t have to worry about them chatting with anyone you don’t know. When you set up the app on their device, you’ll see a list of your Facebook friends’ kids who have Messenger Kids, and you can add them as contacts for your kid. You also have the option of sending a message to your friends whose kids don’t have the app inviting them to try it out, and you can also give your children access to whichever adults you choose.

So my kids can chat with my friend Sara’s kids, and also their grandparents and aunts and uncles and cousins and friends. But not some random stranger, which makes me feel much safer about the whole thing.

Set up is easy – once it’s installed on their device, you authenticate it with your Facebook login (don’t worry, they won’t have access to your Facebook account!) and then select the contacts. Hand the device back to your kid, and away they go to chat with their friends and cousins and whoever else you’ve added as a contact for them.

This app solves a lot of the common messaging problems you might encounter. My kids have iPods, but some of their friends (and their dad) have Android devices, so they can’t all message each other using iMessage. If they all had the Messenger Kids app, they could use that instead. Plus, I can check in on their messages at any time (but don’t tell them I told you that.)

And it’s not just messaging. You can also use it for video calls. When Dad doesn’t have FaceTime but they do, calling him involves installing yet another app. With Messenger Kids, they can video chat with him on the same app they chat with me on when I travel.

It came in handy just the other day, when I asked them to call my best friend in Virginia to thank her for their birthday presents. They could have texted her a message, but with this app, they were able to call her and video chat with her instead.

This is all going to come in handy over the holidays, since we have family all over the country. I know my mom is going to want to visit with the boys on Christmas day from California, and my niece and nephew in Virginia will want to compare gifts with them as well. 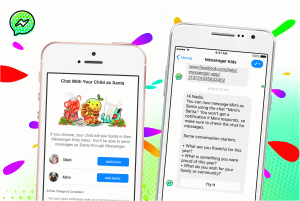 It’s too bad my kids don’t believe in you-know-who anymore, because just in time for the holidays, parents can opt in to activate the ability to message their kids as Santa, direct from the Messenger app! If only I had younger kids, I’d totally use this to find out their wish lists.

So yeah, Messenger Kids is a great app for convenience. But it’s fun too! Granted, I’m old and still don’t understand Snapchat or some of these other social media apps, but Messenger Kids has fun effects and stickers and even some built in games. Personally, I thought I looked pretty good as a mermaid.

Five Lessons I’ve Learned From Helping My Boys With Homework