As the Momma behind The School Bakery, I often think about what it means to be a part of all the little’s birthdays. How it’s this reoccurring, yearly moment, that begins on this day that we anticipate greatly for the 9-months around being pregnant for the birth of a child. One of life’s greatest natural creations. For me, it gives me a never-ending supply of serotonin overload. And it’s such a gift to be able to be a part of so many little’s birthday celebrations – it really is just mind-blowing, most days.

I know I say this a lot but unfortunately, I don’t have an extended family presence here in Louisiana besides my son and me. I have always felt like there is a big part of life that we miss out on. Just last week, I celebrated my 41st turn around the sun with my son and a handful of my closest lady friends. I have leaned in hard to this little idea of The School Bakery because it fills the void in a very big way – and for that, I will be forever grateful.

I always get very reflective around this time. I’m a Virgo to a T. I make lists and lists and more lists. You may have guessed this about me already, but I love to organize. When I’m stressed out, I am always doing something along the lines of cleaning, organizing, running, and baking. I’m a doer, a thinker, and a creator.

So, for fun last week, I started “doing” a little research on the origin of the birthday celebration.

I learned that for middle-class Americans it didn’t become popular until the Industrial Revolution after 1860 and it wasn’t until the early 20th century before it made it into mainstream tradition nationwide. This directly correlates to the production of granulated sugar and how cheaply the manufacturing companies were able to make and sell it. Sugar used to be very expensive, and it was initially only reserved for the upper class once it was introduced into society as a valuable ingredient for cooking.

But to go back even further, birthdays weren’t celebrated at all until ancient civilizations (most historians agree that it was the Egyptians) realized that they needed a way to help pass the time after realizing that they were aging and correlated it to other things that seemed to happen repeatedly in nature like the phases of the moon. They began recording the phases of the moon along with the births of babies which inevitably evolved into what we call the calendar today.

Some reasons that we celebrate today besides birthdays are to create memories and new traditions and to reflect on future possibilities. We celebrate one another’s personal and professional milestones that give depth to our community. Celebrations are centered around love and affection. When we celebrate, we are showing our loved ones that we are grateful for them.

Celebrations in our family, back home in Maryland, were an all-day affair and usually happened on Sundays directly after church. All grandmothers and grandfathers from all sides of our families were welcome whether they were blood or not. Everyone attended along with their children and their grandchildren. We often invited other friends and neighbors as well. We included anyone that wanted to participate in the fun. We genuinely enjoy the act of celebrating.

The best memories of my childhood are of our family celebrations.

It didn’t matter whose house it was at, we all attended, and we all had the best time. Running around outside, playing games, swimming, boating, water skiing, watching sports, doing all the things – together. Usually, every person brought something to the table to contribute.

I’ve been marinating on this for the last few weeks and yesterday I saw this picture of my dear friend Wesley Noble Janssen and her family on Instagram. She recently moved from New Orleans home to Western Massachusetts to be closer to her family during the pandemic. This picture immediately struck me because of how nostalgic it is and that it symbolizes a type of “togetherness” that no matter where we are physically, we all celebrate around the table.

I thought about how New Orleanians celebrate with crawfish (my family’s first crawfish boil here in Louisiana for Easter in 2016 is pictured) together around a long table and see Wesley’s family gathered around a table for her son Ander’s 10th birthday with lobsters and about what my family’s celebration tables look like with oysters, steamed crabs (and yes, we use Old Bay because it was created in Maryland), and always a Southern Maryland Stuffed Ham. Despite the obvious similarities of using foods like shellfish as the main celebratory course and the sugar-filled cakery confections that likely always follow everyone’s meals, the most important similarity is that we are all celebrating together – and always around the table. 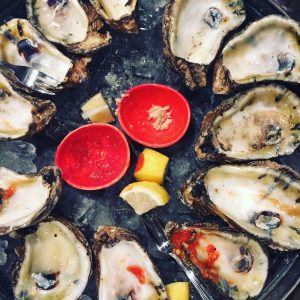 Navigating the Uncertain Future Without Judgment and Lots of Kindness

Self Care :: Creating a Balance