I’ve danced with my friends in a dance troupe, thrown goodies from a float in a night time parade and have been a spectator at many a parade but marching as a band parent was a first for me this year. As a parent, you know that there are things that you just do, you wake up every 2 to 3 hours to feed and diaper your baby and you teach them how to use the potty, never thinking that one day you would push through the tiredness of marching in a parade 4 miles long.

I’m a caregiver by nature so even though the Tiger Band was not marching until Saturday night, my job started before then, mentally at least. We are so used to feeding these “babies” of ours every 2-3 hours, how in the heck are they going to march 4 miles, play their instruments, keep line, stay hydrated AND not become hypoglycemic? Candy, candy, candy AND candy. A fellow band mom volunteered to pick up sandwiches to fuel the boys before the parade and one brought water so they were hydrated and fed needing only little power boosts of candy and water along the way. 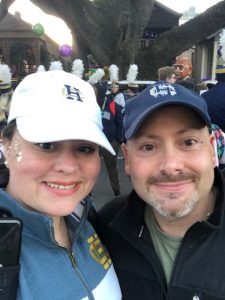 We all know that safety is high on the priority list in the New Orleans Metro Area now more than ever so my husband and I were all hands on deck, who knows what’s going to happen in this crazy city?! If something were to transpire, we would both be there to help protect Finn and the boys. The boys on Finn’s line as well as the ones in front and behind along with my fellow moms in front of me and behind me became even more special. We were all in unison with the same goal: to keep our boys and each other safe and able to finish out the parade. In true Kathy fashion, I slipped on a bead right after we started on Napoleon Avenue and my knee hit the ground. The moms and the boys were quick to make sure that I was okay, thankfully, no one laughed and my pride was more hurt than my knee. We marched in the third parade that night so there was A LOT of debris on the ground. The spry mom in front of me, moved all of the debris out of our way and the mom behind me let me put my flashlight in her backpack. We were a family and took care of one another as we took care of our boys. We truly are a family, a band family.

Other than football season, this parade was the second time I was shown why these kids put in the many hours for the band. Most people understand how much practice a sports team needs to put in to become a cohesive unit but many are unaware that a band needs the same amount of time. Most mornings, these kids are at school for “Zero Period,” 7 am class, practicing their pieces and band formations. These same kids are also practicing at night after they finish their homework and other extracurriculars. To hear the crowd, which consisted of students, teachers, alumni, and complete strangers, clap, sing a long and yell, “We Are HC,” fills your heart because it’s for the band this time AND the school, pride that cannot be described. 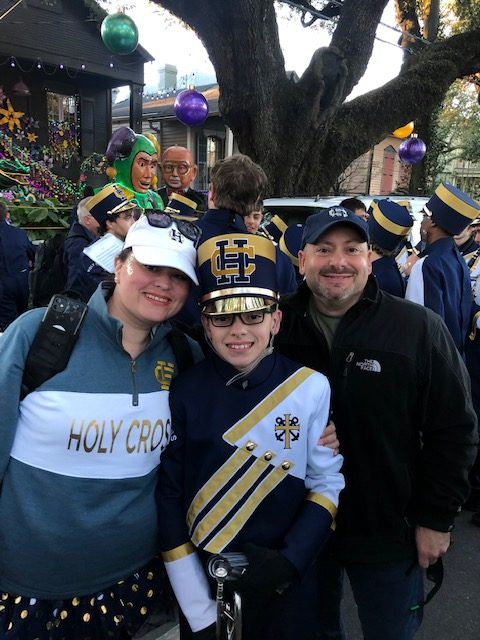 Although my legs, my knee and my pride were a little hurt, I know that these times will pass by in a snap so I’m working on being mentally present every step of the way. Just as the sleeping in 2-3 hour increments are long gone so too will this time with my boy. While spending time with Finn, I am also spending time with his bandmates and their parents, our band family, thankful that they are similar to us and that we are all moving toward the same goal of wanting the best for our boys and putting in our time and effort to help them to become the best versions of themselves.

Navigating Covid During the Holidays

Should I Bring My Child to Jazz Fest?