When I became pregnant with my first child, I was TERRIFIED it would be a boy. I didn’t want a boy. I didn’t know what to do with boys. I had babysat from the time I was in 6th grade until I graduated with my Master’s degree, and in all that time, I always babysat for families with girls: 2, 3, and even 4 girls. I could count on one hand the number of boys I babysat, and few of them had been regular sitting jobs. This was by chance, not choice, but in the end, I felt that God was preparing me to be a girl mom. Girls I could handle  – boys were a mystery.

Luckily, my first child was a girl, and four years later, we were blessed with another girl. Of course, we fielded the inevitable question about whether or not we would be trying for a boy, but two kids were enough to handle, and after watching a pack of male cousins tip over a couch while roughhousing, my husband was just fine being a girl dad. Both of my girls love to play with dolls and pretend to be Disney Princesses, but they are also well versed in Star Wars, TMNT, and Sonic the Hedgehog. They may be a little less rambunctious than boys, but they also make up for it with screaming and drama.

I love being a girl mom, but there is one situation that frequently has me wishing I had had a boy: bathroom duty. 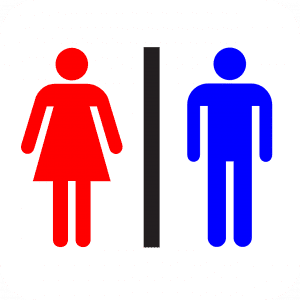 Being the only one that can take my girls to the bathroom when we are in public places drives me absolutely bonkers. I thought changing diapers in public restrooms was challenging, especially when changing tables weren’t available, but at least then, I could change the diaper at my convenience.  Unless I was dealing with a major accident, I could wait until I finished eating to change a diaper. When my girls were in diapers, I never had to leave a half-full shopping cart unattended because someone had to use the potty! But now that they are both capable of using the bathroom, it seems like they ALWAYS have to use the restroom when we are out and about. And it doesn’t matter if I insist that they use the bathroom before we leave the house and warn them against asking to use the bathroom while we’re out unless it’s an absolute emergency – it’s like being physically in a store or restaurant triggers something in their bowels! As a result, I know where the restroom is in every Target, Walmart, and grocery store in our area.

Take for example, this past weekend: We took a day trip to the beach and stopped for dinner at a restaurant closer to home. Since we had been in the car for an hour, we went to the bathroom as soon as we got to the restaurant. I foolishly thought that would allow me to eat dinner in peace, but I was oh so wrong. My children, who had not had to go to the bathroom the ENTIRE time we were at the beach, suddenly needed to release themselves of the ocean’s worth of salt water they must have absorbed via osmosis, so we made two more trips to the bathroom, just during dinner, and then we had to return to wash our hands when we finally finished our meals. They never need to use the bathroom this much at home, but somehow my youngest was incapable of holding it so that I could finish my food while it was still hot.

To be fair, it’s not that my husband won’t take them to the bathroom. If he is out on his own with them and they have to use the restroom, he’ll take them, but when we’re both present, it doesn’t make sense for him to drag them into the men’s restroom just so that I can finish eating or shopping without interruption. And because I often bring my girls with me to run errands after school or during school breaks, more often than not I am having to make these treks to the public restroom without his assistance. In reality, that probably means that, girls or boys, my kids would still drive me bonkers with their constant need to use the bathroom in public places, but sometimes I think that if one of our children was a boy, my husband might have a fairer share of the bathroom burden.

On days when I’ve entered more public restrooms than establishments, I think it would have been nice to have had a boy just so that my husband would have to take a turn.

I guess I’ll just have to comfort myself with the fact that no boys means no target practice.

Stronger Together: Support the HHMS Class of 2022 by Wearing Purple...