Warning :: Some of the information below contains spoilers. 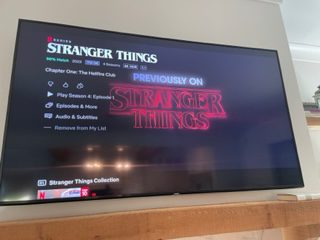 Unless you’ve been living in the Upside Down, you know Stranger Things released its long-awaited Season 4 episodes through Netflix on May 27. My husband and I have been huge fans since the beginning and finally got a chance to catch up on the latest horror-drama. It was…intense. The main characters are not in middle school anymore and it shows.

What exactly is so different about this season that sets it apart from the blood-thirsty monsters of the first few?

With a budget of $30 million per episode, the creators and writers are pushing the limits of horror and gore. The villain in Season 4 isn’t just some mindless, crazed monster out for blood. He is human-like with horrifying motivations. The manner in which he stalks, attacks and murders his victims is graphic and sadistic. If Pinhead from Hellraiser and Freddy Krueger had a baby, it would have nothing on this guy.

There is also a completely separate storyline that involves one of the adult characters trying to escape the torture of a Russian prison camp. These scenes are particularly violent, gruesome, and just plain hard to watch.

After getting halfway through the second episode, it was my husband that actually made the call that it was getting too intense and we should take a break. I agreed.

I grew up on Tales From the Crypt, Tales From the Darkside, Morgus, Nightmare on Elm Street, Poltergeist and any true crime story I could get my hands on. One of my proudest moments was getting to meet the main character from Rob Zombie’s The Devil’s Rejects at a horror convention in my twenties. If I needed a break from Stranger Things, I’m telling you…it’s terrifying.

Maybe kids today are more desensitized to these types of images. However, the show does not skimp on budget and special effects so the graphic scenes are pretty realistic. All of that to say, I am here for all of it! I am loving all of the different storylines, character development, Eighties nostalgia, soundtrack and special effects. I just wouldn’t be comfortable if my kids were watching this particular season without knowing what they were being exposed to.

As much as I loved and devoured anything scary as a child, I very much felt scared afterward. It was a conflicting feeling because there was a rush that came with getting spooked but also a terrifying feeling that stays with you when you’re alone at night and the branches are tapping on your window. I would lose sleep. I also lost some of the innocence of my youth from being exposed to this type of entertainment. It didn’t help that I wasn’t having open and honest conversations with the adults in my life about the fear I was experiencing.

If you’re not into scary shows, I would encourage you to at least discuss it with your kids. Sometimes they want to keep up with what their friends are watching, regardless of how uncomfortable it makes them, so they can fit in and be in the know. Let them know that you’re aware the subject matter may be a bit mature and sometimes scary for them and see if they have any questions. If you’re brave enough to watch, you may even earn some cool points!

Take Your Kids to the Snow